Lenses play a major role in the daily work of a gemologist, from magnification using a loupe or microscope to the optics used in conjunction with lasers from advanced testing instruments. Even our eyes contain organic lenses, which we use to see the world. In many cultures, seeing the world in completely new ways is often achievable by means of introspection such as contemplative moments or meditation, but sometimes all one truly requires is a pair of glasses.

Recently, GIA’s New York laboratory had the spectacular opportunity to observe and analyze two pairs of truly unique antique spectacles (figure 1). The two spectacles have a storied connection dating back to the height of the Mughal Empire. Their lenses are crafted from diamond and emerald, respectively. According to information provided by the client and independent researchers, the two pairs of spectacles were likely fashioned in mid-seventeenth century India, a period in the Mughal Empire that had an established lapidary tradition and artisans with the expertise to accomplish such creations. Information submitted by the client suggests that the lenses may have been cut from the same rough diamond and the same rough emerald, respectively. Further evidence suggests that while the fashioning of the lenses dates back to the seventeenth century, the frames date from the late nineteenth century based on design and style.

The first of the two spectacles, called Halqeh-Ye Nur or “Halo of Light,” consists of two transparent near-colorless modified pear-shaped lenses in a yellow metal frame surrounded by numerous transparent near-colorless stones of various shapes and cuts. The client requested that only the two near-colorless transparent lenses be tested. Infrared spectra and strain images were collected as part of the testing (figure 2). Both lenses were identified as natural type Ia diamonds, sharing matching spectra when overlapped. The strain images revealed natural growth structures and internal stress during diamond formation. While GIA’s investigations were limited in scope to identifying the gem material set in each pair of spectacles, the evidence as a whole seems to suggest that the lenses were cleaved from the same large diamond rough.

The second pair of spectacles, called Astaneh-Ye Ferdaws or “Gate of Paradise,” consists of two transparent green pear-shaped lenses in a white and yellow metal frame set with two green rectangular step cuts and numerous near-colorless stones of various shapes and cuts. According to information provided by the client, the pear-shaped lenses originate from a single natural emerald that originally weighed more than 300 carats. Both spectacles are consistent with the design and style of the late nineteenth century and are believed to have been upgraded to the fashion of the time. 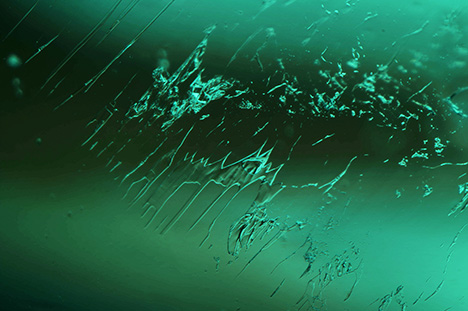 The client requested that both green transparent lenses as well as all 45 of the surrounding near-colorless stones be tested. Microscopic observation, one of the main identification methods for emeralds, revealed an inclusion scene typical for emeralds from Colombia: classic jagged three-phase inclusions hosting a gas bubble and a cubic colorless crystal suspended in fluid (figure 3). It is well established that these daughter crystals are halides, commonly rock salt, derived from the saline brine contained in the primary fluid inclusion (E.J. Gübelin and J.I. Koivula, Photoatlas of Inclusions in Gemstones, Vol. 3, 2008, Opinio-Verlag Publishers, Basel, Switzerland, p. 427). 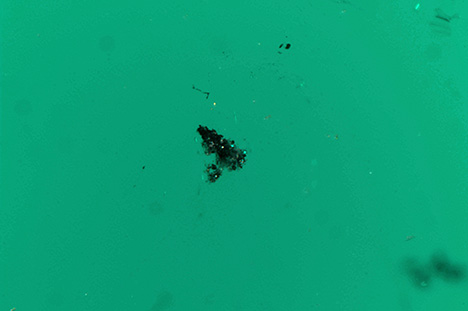 Unidentified tiny opaque black grains were also observed (figure 4), but otherwise the lenses were relatively inclusion free. Examination of minor fissures seen near the gem’s surface using ultraviolet light and microscopic observation indicated the presence of an oil or resin, but this is not believed to have affected the overall appearance. Therefore, the emeralds were classified as having “no indications of clarity enhancement.”

Standard gemological testing revealed a refractive index of 1.577 to 1.583 with a birefringence of 0.006. Examination between crossed polarizing filters showed a uniaxial optic figure. The pleochroism was green to blue-green, and a handheld spectroscope revealed a typical emerald spectrum. These properties and observations confirmed that the green transparent lenses were natural emeralds.

Even by today’s standards, these astonishing curiosities are objects of technical mastery by the artisans and the brilliant vision of the patrons who commissioned the spectacles. From these fine examples of Mughal craftsmanship, to more modern examples such as synthetic sapphire sunglasses made for Sir Elton John (see Winter 1997 Lab Notes, p. 296), we continue to be pleasantly surprised by gem materials passing through GIA that have been fashioned into unique items such as these lenses. We imagine Sir Elton would approve of these Mughal spectacles.