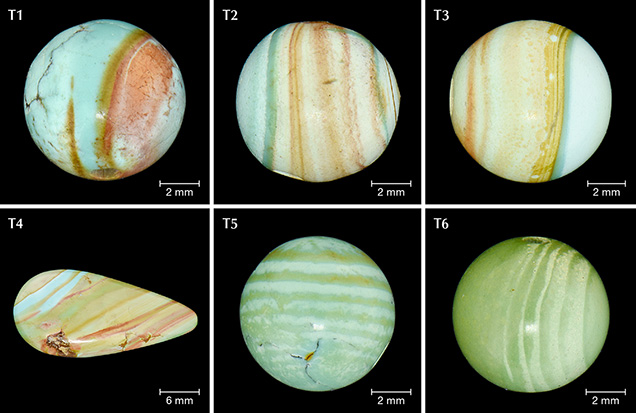 Figure 1. Banded turquoise specimens from Zhushan County, China. Photos of the six specimens show the variation in the color and width of the bands as well as the sharpness of the boundaries between bands. Photos by Tianting Lei.

Six specimens of banded turquoise were obtained through long-term cooperation of local miners from the turquoise market in Zhushan. The specimens displayed numerous bands with various colors, including blue, green, yellow, red, and brown (figure 1). The band profiles of samples T1, T3, T4, and T6 were separated according to color for investigation (figure 2). Specimens T3 and T5 were severely damaged during the cutting process and could not meet the requirements of FTIR testing, but they were measured to analyze the composition and structure. The FTIR absorption spectra, which were typical of those for turquoise, were essentially identical in the various bands within a sample (figure 2). The FTIR absorption fingerprint peaks of turquoise, produced by the vibrations of the phosphate group, range from 483 to 653 cm–1 and from 1000 to 1200 cm–1, respectively. The FTIR absorption peaks of the functional group area, characterized by the vibrations of water molecules and hydroxyl ions (Q.L. Chen et al., “Turquoise from Zhushan County, Hubei Province, China,” Fall 2012 G&G, pp. 198–204), are located near 842, 787, 1659, 3087, 3290, 3461, and 3508 cm–1.

The chemical compositions for turquoise (as a microcrystalline aggregate mineral) obtained from electron probe microanalysis (EPMA) are often not completely consistent with the theoretical value, which is mainly due to the mixed weathering and leaching of minerals. The chemical composition of bands in specimens T1, T3, and T5 is shown in table 1. There was little difference in the chemical composition of each band within the same turquoise, except for the FeOT content in specimen T1. Additionally, there was no obvious linear relationship between the content of other major elements and the color change of turquoise in each band. In specimen T1, the FeOT contents of the red band (T1-2), brownish red band (T1-3), brown band (T1-4), and tan band (T1-6) were higher than that of the blue band (T1-1, T1-5).

Although bands in this turquoise showed obvious color differences, there was no obvious difference in the infrared spectrum and chemical composition of each band. The crystallinity of blue bands was higher than that of the red, brown, and yellow bands. An explanation of the formation mechanism of this material needs further investigation.

Provides criteria for detecting the resin filling of turquoise, an advanced treatment that reduces porosity and can dramatically improve appearance and stability.

Presents spectroscopic and chemical analysis of a new variety of turquoise with a rare raindrop pattern with saturated colors.

A relatively new source of gem-quality turquoise is hosted within slates in Zhushan County of China’s Hubei Province.