Colored Stones from the Deep

Minerals used as gemstones are all around us—for example, feldspar minerals [(Na,K,Ca)Al1+xSi3-xO8] and quartz (SiO2) that make up the bulk of the earth’s crust—and if we were to observe the earth’s mantle down to about 400 km deep, we would find an abundance of the mineral olivine [(Mg,Fe)2SiO4], known as peridot in the gem trade (figure 1). However, most minerals we encounter would not be considered gems due to their small grain size, lack of transparency, undesirable colors, or lack of durability for ornamental purposes. Gem-quality minerals require very specific conditions of pressure, temperature, and chemistry to occur. These unique geological environments are quite uncommon, leading to the rarity of fine-quality gemstones in the earth.

In previous issues of Gems & Gemology, the “Diamonds from the Deep” column addressed aspects of current research on diamond geology. To a geologist, diamonds and their inclusions are ideal tools to study the deep earth (below about 35 km), a region totally inaccessible to traditional geological studies involving field mapping and petrological observations of hand samples collected at or near the earth’s surface. On the other hand, most colored gemstones are formed in the crust—the outermost rocky layer of the earth, reaching down to a depth of roughly 35 km. Still, colored stone deposits are geologically diverse, and many gem-quality crystals do come from the earth’s mantle or the very deepest parts of the crust. The formation of colored stones from the crust-mantle transition and below will be the focus of our first installment of this new column. Future installments will appear in the journal on a periodic basis and will focus on geological concepts related to colored stones that readers now regularly encounter in articles on gems and gem localities. If there are topics of interest for future installments, readers are encouraged to contact the column editors.

Colored Stones and the Deep Earth

We will now describe some of the colored gemstones that provide important information on the mineralogy, composition, and evolution of the earth. 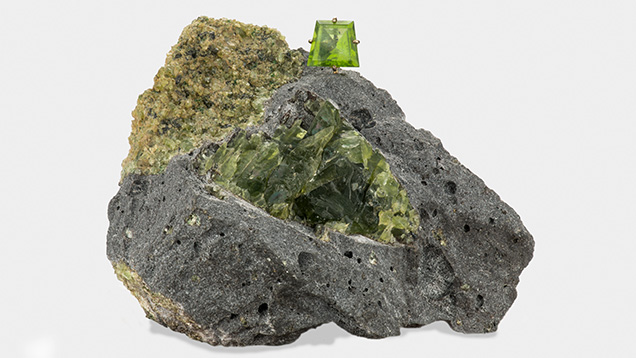 Figure 2. Faceted peridot sitting atop a 1.029 kg peridot nodule contained within the host basalt. The nodule of peridot was sourced from the earth’s mantle brought up as a xenolith in the basalt as it traveled to the earth’s surface. Photo by Orasa Weldon.

Peridot. If one wanted to lay hands on a rock formed deep in the earth’s mantle, the barren deserts in northern Arizona would be the place to go. On the San Carlos Apache Indian Reservation, there are fields of geologically recent (~one-million-year-old) lava flows containing xenoliths of the mantle rocks these magmas passed through on their way to the surface. The alkali basalts in this area are a dull, dark gray color, but occasionally they contain vividly colored nodules composed of crystals or grains of apple green olivine and darker green pyroxene [(Ca,Mg,Fe)SiO3] minerals (figure 2). San Carlos Apache tribal members mine the basalts to recover the gemmy olivine (peridot) contained within the nodules. Because the peridot-bearing nodules are considered a close analogue for the bulk composition of the earth’s mantle, the olivine is widely used as a starting material for experimental geochemical studies aimed at interpreting the dynamics and evolution of the mantle (e.g., Kubo et al., 1998; Liu et al., 2005; Tollan et al., 2018). Similar xenolith-rich alkali basalts found in China, Australia, and Vietnam provide information on the composition of the earth’s mantle since, as stated earlier, olivine is a principal mineral phase.

Volcanically Sourced Sapphire and Ruby. Another glimpse deep into the earth comes from volcanically associated rubies and sapphires. These types of gem corundum (Al2O3) are found predominantly near the continental margins of Australia and Southeast Asia, where they are associated with voluminous alkali basalt extrusions that acted as the mechanism of transportation to bring these gems to the surface. Some volcanically transported sapphires are found in the U.S. state of Montana, as well as where other volcanic formations such as rhyolites (silica-rich volcanic rocks) or lamprophyres (potassic, magnesium-/iron-rich volcanic rocks) would have been involved. In contrast to many colored stones, these sapphires and rubies formed in an extensional rather than a compressional tectonic setting in the crust. In this situation, thinning of the crust allowed for upwelling and eruption of magmas largely derived from the mantle, such as alkali basalts. It is important to point out that the sapphires and rubies were only transported by these basalts—not formed within or by the basalts themselves. Analysis of inclusions within the basalt-related gem sapphires—including feldspar, pyrochlore [(Na,Ca)2Nb2O6(OH,F)], zircon (ZrSiO4), and melt inclusions—indicates their formation from syenitic-type magmas. These sodium-rich silicate magmas likely formed near the boundary between the earth’s crust and mantle and may be related to metasomatism, or the circulation of hot fluids, in the earth’s mantle (Graham et al., 2008; Giuliani and Groat, 2019). The basalt-related rubies likely formed from a more aluminous and mafic (magnesium- and iron-rich) protolith. The rubies have been suggested to have formed through metamorphism of such protoliths, although the identification of melt inclusions in these basalt-related rubies suggests the involvement of melting or magmatic processes in their formation (Palke et al., 2018).

Deep Crustal Gems. The rocks at the earth’s surface contain a tremendous record of the geological evolution of our planet. Since the beginning of the earth’s history, the primary dynamic force has been the slow transfer of heat from deep in the core and mantle to the surface. This heat transfer is the engine for convection in the mantle and the slow drift of the tectonic plates at the surface. Earth’s continental crust has grown and evolved with these processes, meaning the crust serves as a sort of record of tectonic activity. Many geologists have spent their careers tracing out fault lines, dating rocks, and connecting the dots on geological formations to understand how the continents have been variously ripped apart and sutured together again. Geologists specializing in tectonics use specific tectonic events, especially orogenic (or mountain-building) events involving the collision of two or more continents, as markers of the passage of geological time. In fact, most colored stone deposits are the direct result of these collisional orogenic events, with the intense heat, pressure, and fluid movement generated acting as the catalyst for crystallization of gemmy crystals of corundum, beryl (Be3Al2Si6O18), and garnet [(Ca,Mg,Fe)3(Al,Fe)2Si3O12]. However, some of these gems were formed at more extreme conditions and record a view of the deep earth not seen in most other precious stones. 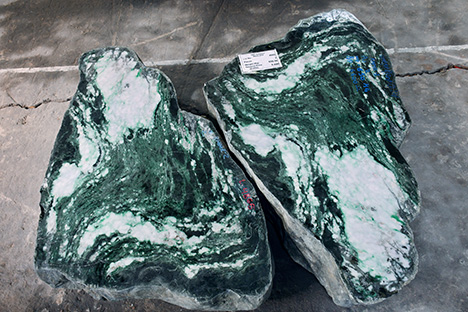 Figure 3. Sawn jadeite boulders, 650 kg total. Jadeite formed in ancient subduction zones where the circulation of fluids brought together all the necessary chemical components to form jadeite. These pieces clearly demonstrate the involvement of fluid flow in the formation of the jadeite. Photo by Wim Vertriest.

Modern collisional tectonic events are generally initiated with subduction of oceanic crust beneath the continental crust and down into the mantle. Subduction of the oceanic crust has been linked to the formation of deep diamonds as far down as the lower mantle (Smith and Nestola, 2021). This process is also responsible for the formation of one of the most sought-after colored stones: jadeite jade (figure 3). A high-pressure mineral rich in sodium, aluminum, and silicon, jadeite (NaAlSi2O6) is a unique record of the fate of rocks and fluids subducted into the earth. Estimates of the geological conditions for jadeite mineralization indicate depths from below about 20 km to an astonishing 80 km below the surface of the earth (Stern et al., 2013; Harlow et al., 2015).

Figure 4. Schematic diagram of a jadeite formation environment in a subduction zone. As oceanic crust is subducted, material builds up in an accretionary prism. Further down, jadeite forms in a high-pressure serpentinite mélange at roughly high-pressure, low-temperature (HPLT) conditions. To reach the surface, this jadeite must be transported from 20 to 80 km in exhumation channels. Lithological variations and thermal structures are modified after Gerya (2011). High-pressure serpentinite mélange, location of exhuming high-pressure rocks, and environment of jadeite formation are based on Stern et al. (2013). Used with permission from Tsujimori and Ernst (2014).

At these great depths, the immense pressure of the overlying rock column enhances the solubility in water of certain chemical components, including sodium, aluminum, and silicon. The fluids trapped by the subducted oceanic crust (mostly water) can dissolve these necessary chemical components from their host rock and migrate upward into the overlying mantle wedge including oceanic crustal rocks, and forming the so-called mélange matrix. As these fluids make their way up into the mélange matrix, the dissolved chemical components precipitate out and crystallize jadeite in veins representing the original fluid flow pathways. The truly astonishing aspect of this is the fact that these deep rocks can now be found right at the earth’s surface. Jadeite deposits represent the movement of subducted material from 20–80 km up to the surface in exhumation channels either during or after the cessation of subduction and collision (figure 4). Jadeite deposits are useful as markers and indicators, both geographically and temporally, of fossil subduction and collisional tectonic events. 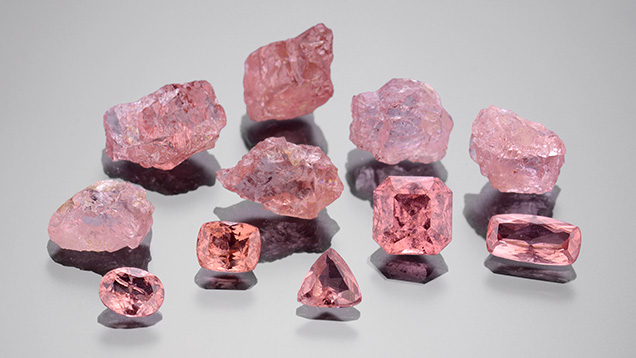 Figure 5. Pyrope garnets from Dora Maira, Italy. These garnets formed as part of the earth’s continental crust was subducted down to 120 km in the diamond stability field. The faceted stones range from 0.50 to 1.69 ct. Photo by Diego Sanchez; courtesy of Todd Wacks, Tucson Todd’s Gems.

One final example of a colored gemstone recording deep geological processes comes from the Dora Maira garnets found in the Italian Alps (figure 5). These are unique in the world in being nearly pure pyrope garnets (Mg3Al2Si3O12). Their formation would have required extreme pressures as well as a very magnesium-rich and relatively iron-poor source (protolith). Petrological studies of these garnets and their host rocks indicate formation at depths of around 120 km (Chopin and Schertl, 1999). This means Dora Maira pyrope garnets formed in the diamond stability field at a depth where some lithospheric diamonds may have been sourced (Hermann, 2003). The Dora Maira garnets could only have formed in what were originally continental crustal rocks, which generally cannot be subducted to such great depths due to the generally buoyant nature of the continental crust. The Dora Maira deposit is proof that in some extraordinary conditions during continental collisional events, some continental crust can be essentially subducted into the earth. What is even more surprising is that age-dating of zircons associated with these garnets suggests that the Dora Maira massif would have moved from a depth of around 120 km in a timescale of only 5–6 Ma, an astonishingly brief period in a geological sense.

Colored Stones and the Earth’s Crust

Geological study of the deep earth is fundamental to an understanding of plate tectonics, the earth’s evolution, and the overall dynamics of our planet. However, most colored stones are formed through geological processes at work from a few tens of kilometers deep right up to the earth’s surface, essentially. The interplay between the solid, rocky crust and the hydrosphere (all the earth’s water), the atmosphere, and the biosphere (all the earth’s life) gives rise to an enormous diversity of geological conditions, many of which are capable of producing fine gemstones through geological timescale. The processes occurring in the earth’s crust that are responsible for colored gemstone deposits will be the primary focus of future installments of this column.