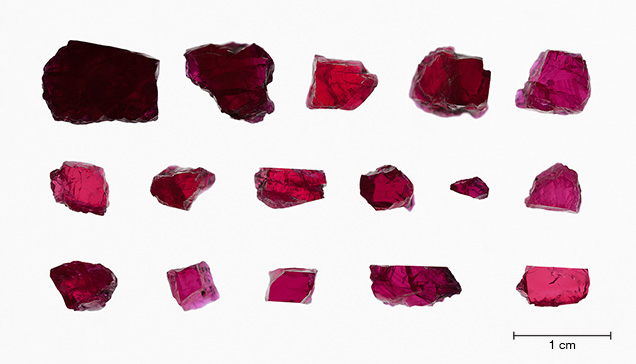 With rubies discovered about 100 years ago, the Longido district of Tanzania is one of the longest-known occurrences in Africa. The deposit is famous for its “ruby-in-zoisite,” consisting of large red corundum crystals in a striking green zoisite matrix, often speckled with black amphibole spots. The majority is used for carving, but occasionally facet-quality material is discovered (D. Dirlam et al., “Gem wealth of Tanzania,” Summer 1992 G&G, pp. 80−102).

For this study, 16 transparent rubies (figure 1) were collected during a July 2016 field expedition. The stones were acquired at the Mundarara mine in Longido and from a dealer in a nearby trading post. Most of the rough material ranged from 1 to 3 ct, although one heavily fractured piece weighed about 7 ct. Colors ranged from red to purplish red, very similar to the color of high-quality Mozambican ruby. Fluorescence was medium red under long-wave UV and weak red under short-wave UV.

The inclusion scenes (figure 2) had features similar to those of rubies from Mozambique: short needles, particle banding, and reflective platelets (V. Pardieu et al., “Rubies from the Montepuez area, Mozambique,” GIA News from Research, Oct. 1, 2013).The most common inclusions were thin films (figure 2A), a combination of needles and reflective platelets (figure 2B) and particle banding (figure 2C). In addition, dense particulate planar clouds were arranged mostly parallel to each other and associated with short and long needles (again, see figure 2C). Internal growth zones (figure 2D) and twinning features were also found. Several types of crystals were identified by Raman spectroscopy, including amphibole, mica, and feldspar. Undetermined opaque metallic inclusions were also observed. 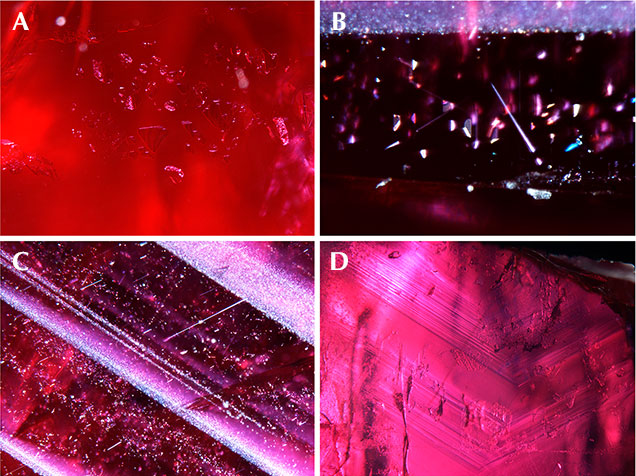 Various advanced analytical techniques were used to characterize the properties of the studied rubies. Fourier-transform infrared (FTIR) spectroscopy revealed strong absorption features consistent with boehmite in all samples. Other minerals that are normally present in ruby, such as diaspore or kaolinite, were not detected in the studied rubies.

The trace element concentrations of these rubies were analyzed with laser ablation–inductively coupled plasma–mass spectrometry (LA-ICP-MS) and compared to ruby from other East African sources (table 1). The rubies from Longido were extremely rich in Cr and fairly low in Fe compared to other African sources. The only East African deposit producing ruby with similar concentrations of chromophores is Maninge Nice in Mozambique, but the facet-grade material from Longido has lower magnesium content on average. Other deposits can be separated from Longido based on other trace elements (again, see table 1), although minor overlap cannot be excluded.

While Longido is traditionally known for large ruby-in-zoisite specimens, facet-grade rough is also produced and can yield attractive gemstones. Chemical analysis revealed an extremely high chromium concentration in both facet- and carving-grade ruby. While the internal features of the rubies from Longido are quite similar to those of other African deposits, trace element composition can aid in positively identifying their origin.

Boodsakorn Kongsomart is a research scientist, Wim Vertriest is supervisor of field gemology, and Vararut Weeramonkhonlert is a colored stone analyst at GIA in Bangkok.

Rubies from the Montepuez Area

Reports on an expedition to many known and new Tanzanian gem localities.

The East African nation of Tanzania has great gem wealth.