A team of GIA field gemologists visited Tanzanian mines in the summer of 2016 to collect ruby and sapphire for GIA’s reference collection and explore new sources of colored stones. The field expedition, led by these authors, visited many known Tanzanian gem localities as well as new deposits at Loolera, Kibuko (figure 1), Lutela, Amani Makoro, and Ngapa. The trip was made possible by the support of Mark Saul of Swala Gem Traders (Arusha, Tanzania), Tanzanian gem broker Justin Mmbaga, and several regional mining officers. We found that the most active colored gemstone mining area is still Merelani, which produces tanzanite and green grossular garnet. Ruby and sapphire output has been relatively low since the 2009 discovery of the ruby deposit in Montepuez, Mozambique, as confirmed by our Tanzanian sources.

Tanzanian miners supply stones to licensed brokers, who are allowed to buy and transport gems within the country. These brokers sell to licensed master dealers, who are allowed to export internationally. These master dealers are mainly located in Dar es Salaam and Arusha. While we met Thai and Sri Lankan buyers in Mahenge, Songea, and Tunduru, foreigners must have approval from regional mining officers and possess a proper business visa to visit the deposits. This is particularly enforced in southern Tanzania; around Songea, we met immigration officers who were “hunting for foreigners.”

Our journey started in Longido, where rubies were discovered about 100 years ago (D. Dirlam et al., “Gem wealth of Tanzania,” Summer 1992 G&G, pp. 80−102). The main operation in the Longido area is the Mundarara ruby mine, currently Tanzania’s largest, with a workforce of 78 people. The gems are extracted from an underground tunnel about 200 meters deep crossed by several horizontal tunnels that host most of the production. The mine yields ruby in zoisite (suitable for carving), as well as some cabochon- and facet-grade material of a very deep red color. The color is reminiscent of rubies from Mozambique.

We continued to the Umba River, where Tanzanian sapphire production began after World War II and a ruby-bearing area was discovered by Georges “Papas” Papaeliopoulos in the 1950s (again, see Dirlam et al., 1992). The situation has changed significantly since author VP visited in 2005 and 2009. At the time there was a dispute between the company working the deposit, called “Amazon,” and local communities. The dispute ended with the government revoking Amazon’s license. During our 2016 expedition, we witnessed about 40 small-scale local miners using hand tools to work the primary deposit discovered by Papaeliopoulos, as well as secondary deposits scattered along the banks of the Umba. Most of the production is traded each evening around the Mississippi Hotel in Umba.

In the Kilindi area, about halfway between Umba and Winza, a new ruby deposit has been discovered near the Maasai village of Loolera. This site, located atop a hill, produces gems very similar to those found near Winza in 2007. We visited the area with the support of the village leader, who said the first rubies were found about 10 years ago, but the quality of the stones was low. A few miners were working the deposit sporadically using hand tools. But in April 2016, some good-quality material was found in amphibole matrix, attracting considerable interest. About 25 mining licenses were issued during the summer of 2016, but there is a sense that the area is under the control of a few major players.

The deposit where the first rubies at Loolera were found is owned by a miner called Dr. Ozu. The mining pit appeared to be about 90 meters deep, but we could not inspect the tunnel as Dr. Ozu was not present. We studied the entrance and looked through the tailings near the pit. In these rejects we found many small fragments of rubies associated with garnets, amphibole, mica, and feldspar. Although the material we saw resembled Winza ruby, the stones contained minute particles that gave them a milky aspect.

Our next stop was Winza, where an important gem rush occurred in 2007−2008 (D. Schwarz et al., “Rubies and sapphires from Winza, central Tanzania,” Winter 2008 G&G, pp. 322−347; V. Pardieu, “The Winza ruby and sapphire mining area, Mpwapwa district, Dodoma province, Tanzania,” www.fieldgemology.org, 2009). The main mining area at Mtakanini was nearly deserted. An old rusted washing plant was visible, but due to mechanical problems it had not washed any stones in more than a year. We estimated that a handful of people were still mining around Mtakanini, mainly at primary deposits in underground tunnels, some of which were over 100 meters deep. Working conditions are difficult, as the rock is hard and the tunnels are prone to flooding. We learned that several brief ruby rushes occurred nearby at Godegode, Makutop, Magaseni, Singonali, and Berega. In Morogoro Province, two ruby and spinel mining areas have been exploited since the 1980s. One is located just east of Morogoro in the Uluguru Mountains, and the second is about 150 km south near Mahenge. Most of the gem trade in the Uluguru Mountain region is in Mkuyuni, while the mining takes place near Matombo, Ngongolo, Mwaraze, and Kibuko. In Matombo we witnessed about 30 people retrieving pink spinel and rubies from a secondary deposit near Kiswila. Near Ngongolo, we visited four small-scale operations where locals with hand tools were mining small rubies in marble associated with pyrite, graphite, and mica.

Near Kibuko, a new pink sapphire deposit was worked by about 10 miners on a site owned by Luciano Kipanzi, who took over the area in 2015. Pink sapphires up to 100 carats are associated with carbonates and pyrite in a primary deposit (figure 2). Most of the stones were the milky “geuda” type, but there was some transparent facet-grade material with very fine crystallization. The mine had evidently yielded about 20 kg of sapphire, from cabochon- to facet-grade, during the previous six months. Nearby, three groups of small-scale miners were uncovering a limited amount of similar stones from secondary deposits. 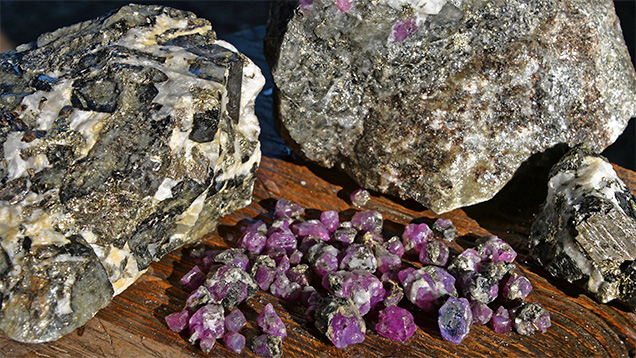 Figure 2. Pink sapphires from the new deposit near Kibuko. Photo by Vincent Pardieu/GIA.

The Mahenge district, known for spinel and ruby, is the second most active gemstone mining area in Tanzania. Recent discoveries of graphite near Ipanko and garnet near Lutela (the latter in February 2016) have kindled interest in the area. The new alluvial deposit produces an interesting range of attractive garnets (figure 3), from light “champagne” to deeper saturated rhodolite, including some color-shifting stones. We saw some clean stones weighing up to 20 ct and heard about others as large as 60 ct. About 100 miners were still working the alluvial deposit. Activity was already slowing; we were told that a few months earlier, up to 300 miners were in the valley. This secondary deposit is rapidly depleting, and so far no primary deposit has been located. 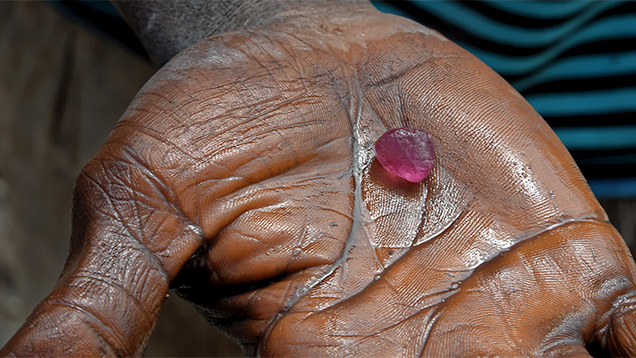 Figure 3. This garnet was mined from the new deposit in Lutela, Tanzania. Photo by Vincent Pardieu/GIA.

Ipanko is still the main spinel deposit in the region. Author VP noticed that the pits were much larger than in 2012, meaning that the area had been mined since then. Nevertheless, the activity seemed slow compared to 2012: Several excavators were working secondary deposits, whereas small-scale miners once worked individual plots, called “boxes” by the locals. The nearby primary spinel deposit was still active, with about 400 people mining red spinel and only a few working on rubies. We then visited several small-scale ruby deposits along the Lukande River, including three operations working either primary or secondary deposits. As in the Uluguru Mountains, the rubies from these areas come from marble-type deposits. We saw about 50 miners working around Lukande, Kwam Somali, Mayote, Chipa, Ibogoma, Gombe, and Kitonga during the dry season, retrieving cabochon-grade rubies along with smaller facet-grade material. During the rainy season, these workers focus on gold mining or farming.

Our last visit was the region around Songea and Tunduru, where sapphire production began in the 1990s. The Songea deposit, discovered in 1992, was quite productive until the discovery of fine blue, yellow, and pink sapphires near Tunduru in 1994. The deposit was nearly inactive until the early 2000s, when the newly developed beryllium diffusion treatment was able to turn Songea’s muddy green and brownish purple stones into attractive yellow to orange sapphires. In Songea, we heard of a new discovery at Amani Makoro, close to the old diggings around Ngembambili and Masuguru. In Amani Makoro, we witnessed about 200 miners in a swampy area using hand tools. The aspect and quality of the stones was similar to those from Ngembambili and Masuguru. Overall, about 300 people are still mining or trading gems around Songea. According to the regional mining officer, nine Thai merchants are registered buyers here. Songea still seems to be Tanzania’s most active sapphire mining area.

The region east of Tunduru, located along the Muhuwesi, Lumesule, and Ruvuma rivers and up through Ngapa and Kitowelo, is known to produce blue, yellow, green, pink, and purple sapphires, and rarely rubies. The deposits, discovered by Swiss gem merchant Werner Spaltenstein in 1994, were very active until 1999, when buyers left Tunduru for the newly discovered sapphire deposits of Ilakaka, Madagascar.

A paved road linking Tunduru to the coast and then Songea should be finished in 2017, making these areas much less isolated. Around Tunduru, a new environmental law that forbids mining within 60 meters of a stream or a river is creating issues, as most of the mining there takes place in riverbeds. Last year Mr. Spaltenstein had to stop his mechanized operation because of that law, though local authorities seem to be more tolerant of small-scale miners. While the area is much less active than when VP visited in 2005 and 2008, we estimate that about 400 to 500 miners are working around Tunduru. In the town, we found 10 Sri Lankan and three Thai buying offices. In the main gem-producing area there was a small rush in Ngapa, near Kitowelo and the area known as the “DSM Box” (figure 4). We were told the area produces some good blue, pink, and purple sapphire rough weighing up to 50 ct; fine sapphire of this size was previously unknown in Tunduru. The second most active place was Muhuwesi, where several groups of small-scale miners are reportedly working.

Figure 4. This blue sapphire rough, weighing about 7 ct, is from the new deposit at Ngapa, near Tunduru. Photo by Vincent Pardieu/GIA.

The post-2009 downturn of Tanzania’s ruby and sapphire mining was not unexpected, because many of the corundum discoveries triggered rushes that were exploited for short-term gain. Tanzania also faces competition from the world-class ruby deposit in Montepuez. Nevertheless, recent colored stone discoveries point to the vast potential of gem mining in Tanzania.

Vincent Pardieu is senior manager in the field gemology department, and Wim Vertriest is a trainee in field gemology, at GIA in Bangkok.