The year 2017 marked the 50th anniversary of Campbell Bridges’s discovery of tsavorite. At the 2017 AGTA Tucson Gem Fair, the Smithsonian Institution hosted a selection of historical pieces from Bridges’s personal collection to commemorate his life’s work (figure 1).

Starting in the front row and proceeding from left to right, we begin with two crystals that are some of the first tsavorites Bridges discovered, near Komolo, Tanzania, in 1967. These are among the first samples that were analyzed to identify this new gemstone.

Next, the tsavorite in matrix represents the 1970 discovery in Taita, Kenya, at Bridges’s GG3 mine. Also represented from this location is a lovely tsavorite “thumbnail” unearthed in 1971. Some years prior, Bridges was engaged by Tiffany & Co. as a consultant. He was the first to bring tanzanite to the United States, and was credited with the discovery of tsavorite in Tiffany ads introducing the gem to the public in 1974 (figure 2). 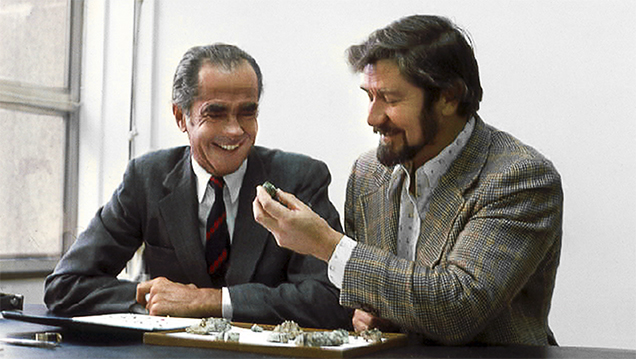 The three large tsavorite rough samples weighing more than 5 grams each were found in 1980 at a source Bridges christened the Scorpion mine. The vibrant yet rich pure green to bluish green hue became a well-known characteristic of material from this mine. Over the following four decades, the Scorpion mine would prove to be the world’s most prolific producer of fine tsavorite.

The next six rough pieces, weighing 5 to 25 grams, were recovered in 1992 from the famed Bonanza tunnel at the Scorpion mine. The Bonanza tunnel is the richest tsavorite-bearing reef zone at Scorpion and has yielded some of the finest pockets the world has seen. The “saddle reef structure,” a series of recumbent folds, is the characteristic geological feature identified by Bridges at the Scorpion mine. This distinctive structure has led to the mine’s rich and consistent production throughout its history.

Rounding out the Scorpion mine material in the top left corner is an extremely rare terminated euhedral tsavorite crystal in matrix. As tsavorite occurs under very high pressures and temperatures, it is often highly fractured in rough form, making such an unblemished and well-formed specimen a remarkable occurrence.

In the top right corner, we have a tsavorite nodule in matrix that opens a window into the gem’s formation and its associated minerals. This nodule was extracted in its entirety from the Bonanza reef three decades ago and kept intact.

Keeping guard on this tsavorite bounty are the namesakes of the Scorpion mine. These pewter scorpions were directly cast from actual scorpions that patrolled the mine. Needless to say, it’s advisable to check your shoes in the morning… Also on display is one of Campbell Bridges’s earliest business cards, from 1967.

In the top row are four extraordinarily fine, loupe-clean faceted gemstones. None of these were ever on public display before the Tucson exhibit. The first is a lovely 25.10 ct “mint” green grossular garnet, unearthed in 1971 from Bridges’s GG2 mine in Taita, Kenya. Interestingly, this color of mint green garnet has been found at all of the Bridges mines in Tanzania and Kenya over the decades. A strike may yield both richly colored high-chromium and vanadium-colored saturated tsavorite, as well as the far lighter, mint green garnet within the same pocket. This variety is most prevalent in Merelani, Tanzania, but also occurs near Komolo, Tanzania, as well as in Taita. While such material came from all three locations in the early years, it simply was not marketable back then. It was not until the 2000s that a real market for these garnets developed.

Next is an exceptional 31.27 ct oval from Merelani with a vivid blue-green color. This tsavorite retains fantastic brilliance even in low lighting, while maintaining a sufficient level of saturation under strong lighting.

Last but certainly not least are two tsavorite cushions. As to their origin, the Bridges family wishes to preserve an element of mystery. The 33.55 ct square cushion on the right is a loupe-clean gem exhibiting an exceptional blue-green color that is well saturated yet extraordinarily vivid. After a lifetime of dealing with tsavorite, the author considers this one of the finest examples ever produced between 10 and 50 carats.

The largest of the four faceted gemstones in this display is a 58.52 ct cushion. It is another loupe-clean example representing the pinnacle of what is possible in tsavorite. It also exhibits a strong blue-green color that glows in any lighting environment. This is the finest tsavorite above 50 ct observed by this author. Given its one-of-a-kind nature, the Bridges family felt it most appropriate to name the gem the “Golden Jubilee” in honor of tsavorite’s 50th anniversary.

As tsavorite and the legacy of Campbell Bridges celebrate 50 years, the Bridges family wishes to thank the Smithsonian and the colored gemstone community for their support throughout the years.

Bruce Bridges is the president and CEO of Bridges Tsavorite in Nairobi.

Exceptional stones are recirculated and new production is showcased at the AGTA show in Tucson.