When CVD-produced diamonds are grown with nitrogen added to the gas mixture, or when the growth rate is relatively high, the as-grown crystal ends up having an undesirable brown color. In order to improve this color, CVD-grown diamonds are often treated at high-pressure, high-temperature (HPHT) conditions after their growth. The Antwerp laboratory recently received 11 CVD laboratory-grown diamonds that had been subjected to HPHT treatment after growth but still had a relatively uniform low color grade (J-equivalent, figure 1).

The samples were round brilliants with weights ranging from 1.02 ct to 1.33 ct and clarity grades in the VS range. Commonly observed clarity characteristics were crystals, needles, and pinpoints along with feathers. They were classified as type IIa diamonds with weak additional absorption peaks at 1332, 1344, 2947, and 3031 cm–1. Four showed a weak absorption peak at 3107 cm–1 (N3VH). None of them showed the CVD-specific NVH0 band at 3123 cm–1 (P.M. Martineau et al., “Identification of synthetic diamond grown using chemical vapor deposition [CVD],” Spring 2004 G&G, pp. 2–25). UV-visible absorption spectra taken at liquid nitrogen temperature revealed the presence of the SiV– center, a defect commonly observed in CVD synthetic diamonds. Photoluminescence (PL) spectra taken with various excitation wavelengths and at liquid nitrogen temperature showed the presence of a strong SiV– doublet (736.6/736.9 nm), strong NV0/– (575 and 637 nm) centers, numerous peaks in the 520–550 nm region, and a strong H3 (503.2 nm) center. Furthermore, all the spectra showed an absence of the SiV0 (946 nm) and 596/597 nm centers. This last center is commonly observed in as-grown CVD synthetic diamonds but is removed by post-growth HPHT treatment. A weak H2 center (986 nm) was observed in six stones. Weak Ni-related absorption peaks were detected in 830 nm PL spectra of all the samples, but at higher wavelengths than expected (884–885 nm, potentially attributed to high strain). Microscopic analysis using crossed polarizing plates confirmed the presence of strain throughout the stones. 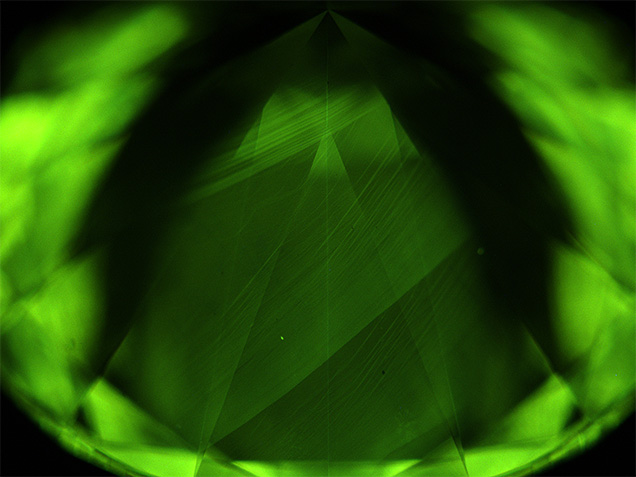 DiamondView images showed green luminescence (linked to the strong H3 center revealed by PL spectra) and a weak bluish green phosphorescence. All samples showed clear linear growth striations. Some revealed a multilayer stop-start growth. The orientation of the growth layers gives an indication of the angle at which the stone is cut from the rough plate (figure 2).

Based on all the observations, we conclude that the analyzed CVD laboratory-grown diamonds underwent HPHT treatment after growth. Their relatively low color grades are believed to be linked to the duration of the treatment. More efficient treatment would likely result in a higher color grade.

Ellen Barrie is supervisor of analytics at GIA in Antwerp, Belgium.

A composite of synthetically grown and natural diamond was recently identified by the Carlsbad laboratory.