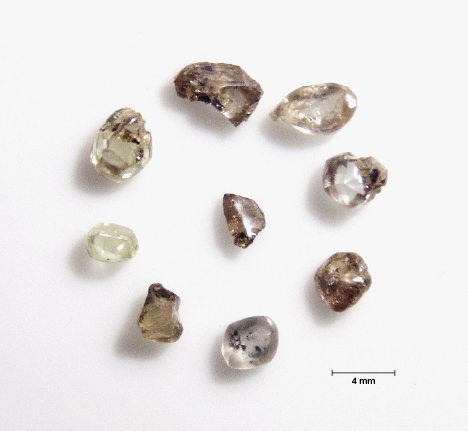 Figure 1. These diamonds from Crater of Diamonds State Park were mined previously by other prospectors. They range up to approximately 0.06 ct. Photo by Roy Bassoo.

There’s only one place on earth where the general public can prospect for diamonds directly from a primary kimberlite pipe: Crater of Diamonds State Park. This park is nestled among the pines, 100 miles off the interstate near the town of Murfreesboro, Arkansas. It boasts a network of scenic walking trails, picnic sites, and campsites. At its Diamond Discovery Center, visitors can learn about the local geology. Staff are also on hand to identify any minerals that are taken home, per their “finders, keepers” policy. The park is an ideal spot for a field trip. The state also hosts many other unusual igneous rocks, including carbonatite, lamprophyre, and lamproite. With this in mind, our university petrology class piled into a van to visit Arkansas and learn about mantle-derived magmas and associated volcanism. As a side quest, we wanted to try prospecting.

The park’s main attraction is diamonds, but there are also olivine, pyrope, almandine, and amethyst to be found. Most of the diamonds recovered there are small (approximately 0.20 ct or less); see figure 1. Rarely, prospectors have found stones larger than 1 carat, including the famous Uncle Sam, a whopping 40.23 ct. The park’s diamond-bearing rocks are comprised of hypabyssal olivine lamproite and phlogopite-rich tuffs and breccias, characterized by high Mg# values (atomic ratio of Mg to Fe in an igneous rock) and K2O content (E. Walker, “Petrogenesis of the Prairie Creek, Arkansas, diamondiferous olivine lamproite,” PhD thesis, University of Western Ontario, Ontario, Canada, 1991). The deposit grades between 0.01 and 1.25 carats per 100 tons (D.P. Dunn, “Xenolith mineralogy and geology of the Prairie Creek lamproite province, Arkansas,” PhD thesis, University of Texas, Austin, 2002). In the early twentieth century, when the richest material was mined, there was a brief diamond rush in the area (figure 2). After a string of ownership changes and failed business ventures, visions of a South African–style diamond district never materialized. In 1972 the state of Arkansas purchased the land and opened it to public prospecting. Since then, visitors have found more than 33,000 diamonds (www.arkansasstateparks.com).

After a couple of days learning about the igneous rocks in the area, it was time to test our luck at treasure hunting. We gathered buckets, shovels, and sieves from park headquarters for a small rental fee and headed out to 15 hectares of routinely plowed “blue ground.” We chose a spot, shoveled soil into buckets, and carried these heavy parcels of dirt to the wash station for sieving (figure 3). The trick is to shake the sieve back and forth just beneath the water in the horizontal plane, then rotate and repeat. This motion should concentrate the heavy minerals in the center and bottom of the sieve. Then, like a master chef, the prospector flips the entire mineral concentrate upside down and examines the heavies that sink to the bottom.

Figure 4. Three of the diamonds the authors collected from Crater of Diamonds State Park (approximately 0.01–0.05 ct). Note the irregular and fragmented morphology and brown to yellow colors. Photos by Roy Bassoo.

In three hours, we found a small collection of diamonds! Granted, they were also very small in size, ranging from 0.01 to 0.05 ct (figure 4). Most prospectors at Crater of Diamonds miss stones this small, but as trained mineralogists we were attentive to small crystals. The diamonds were predominantly colorless, although a couple were yellow to brown. Their dominant morphology was octahedral with uncommon dodecahedrons and macles. Resorption pits and terraced surfaces were pervasive. The diamonds were also fragmented, likely due to the explosive nature of the diatreme crater.

Figure 5. Terraced dissolution surface textures and inclusions of rutile and diopside embedded within the diamond. The diopside inclusions are aligned along a growth band. Photomicrograph by Roy Bassoo.

Treasure in hand, we then turned to the science. Back in our lab, we ground and polished the diamonds into wafers to examine their composition and crystal interiors. Raman spectroscopy determined that inclusions of rutile and diopside were common (figure 5). N contents, measured with Fourier-transform infrared spectroscopy, ranged from trace amounts (type IIa) to 1250 ppm (type IaAB). Cathodoluminescence imagery showed blue to turquoise response colors, typical of diamonds mined from primary deposits worldwide. They also feature fascinating patterns of growth banding and resorption truncations, which indicate a complex mantle crystallization history (figure 6). 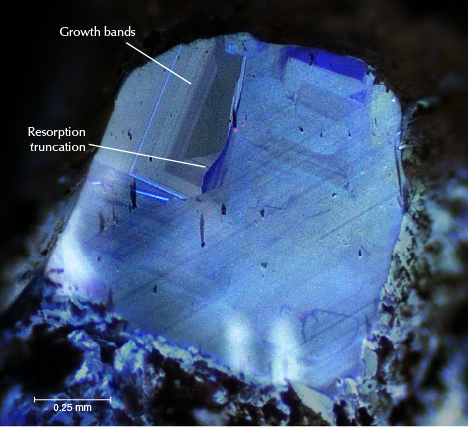 We found Crater of Diamonds to be a thoroughly enjoyable treasure hunting adventure. Our visit gave us hands-on experience with diamond-bearing igneous rocks and challenged us to imagine how diamonds formed beneath the North American craton. We have new appreciation for the back-aching labor required by the artisanal miners worldwide who are the foundation of the gem trade. Scientific understanding and trade awareness were the substance of our visit, highlighted by moments of joyful discovery. We encourage readers to put Crater of Diamonds State Park on their gemology “bucket list” to hunt for their very own American diamond.

Roy Bassoo is a PhD candidate, and Kenneth Befus is assistant professor, in the department of geosciences at Baylor University in Waco, Texas.