Due to their rare occurrence and the environment required to create their color, natural green diamonds are some of the world’s most beautiful and sought-after gems. Most diamonds acquire their color from impurities or defects incorporated into the diamond lattice when the material is hundreds of kilometers deep in the earth’s mantle. But most natural green diamonds are colored by radiation damage that occurs at very shallow depths in the earth’s crust over long periods of time. Commonly accompanying this exposure to radioactive minerals and fluids are surface patches of green or brown color that gemologists call “radiation stains.” These are simply areas of extreme damage to the diamond structure caused by alpha particle radiation. Initially green, they turn brown immediately after exposure to temperatures above 500°C. These surface features indicate that a diamond has been exposed to a source of natural radiation; green stains are commonly associated with naturally colored green diamonds. 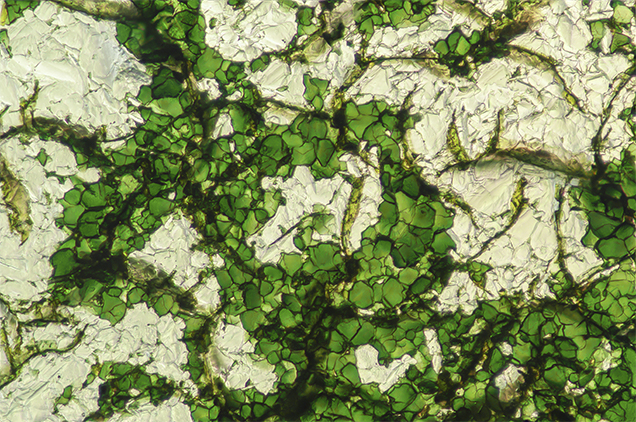 Figure 3. The Raman spectrum (514 nm laser excitation) of the rough diamond’s green coating shows clear peaks from chromium oxide (552 and 613 cm–1) as well as the underlying diamond (1332 cm–1). The specific positions of the chromium oxide peaks suggest the coating has been annealed to ~700°C (Mohammadtaheri et al., 2018).

Recently, GIA’s Carlsbad laboratory examined an interesting attempt to imitate a natural green diamond when a 6.49 ct green crystal was submitted for a Colored Diamond Grading Report (figure 1). The surfaces of the resorbed octahedron were covered by uneven patches of green color. Fourier-transform infrared (FTIR) analysis revealed a typical type Ia diamond with abundant nitrogen and hydrogen impurities. However, the ultraviolet-visible (UV-Vis) spectrum was very unusual and did not show any of the bands that are produced by radiation damage in diamond (e.g., the GR1 defect). Careful examination under magnification found that the green color was not due to radiation stains, but instead to groupings of emerald-green platy crystals, ~40 μm in size, attached to the diamond surface (figure 2). Individual platy crystals could easily be flaked off using tweezers or a pointer probe, but they remained adhered to the surface under normal gem testing situations, including wiping the diamond with a stone cloth. X-ray fluorescence (XRF) analysis indicated high concentrations of chromium, and Raman analysis identified the green plates as chromium oxide (figure 3). The Raman peak positions correlated very well with chromium oxide powder that had been heated to ~700°C to produce a crystallized coating (M. Mohammadtaheri et al., “The effect of deposition parameters on the structure and mechanical properties of chromium oxide coatings deposited by reactive magnetron sputtering,” Coatings, Vol. 8, No. 3, 2018, Article No. 111). A small H1b defect present in the diamond’s FTIR spectrum supports this annealing temperature.

Most colored coatings encountered in the lab are on faceted stones and are pink, orange, red, or blue. The warmer hues are typically created by sputter-coating techniques involving metals and the colder hues by inks or other organic dyes. The use of chromium oxide powder to produce a green coating—along with annealing of the powder to produce crystallized plates that adhere to the rough surface to resemble radiation stains—represents a significant attempt to artificially reproduce the features seen on natural green diamonds. While the unique coating is easily discerned from natural green radiation stains under magnification, this stone is a strong reminder to carefully examine any green diamond, even rough crystals, in order to know exactly what you are buying.

Virginia A. Schwartz is supervisor of diamond identification, and Christopher M. Breeding is a senior research scientist, at GIA in Carlsbad, California.

The stone owes all of its green color to these shallow radiation stains.