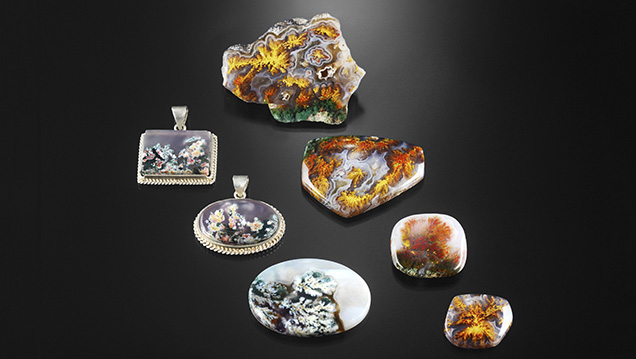 Figure 1. Iranian plume agate (22.45–82.03 ct) from the Ferdows agate field comes in two main varieties. The material on the left with white, green, and orange inclusions is known as “spring agate.” The stones on the right with red, yellow, and green inclusions are called “autumn agate.” Photo by Diego Sanchez.

Iran has long had a reputation as a source of quality agate, principally derived from extensive volcanic deposits throughout the country. Archaeological research on ancient tombs and finds in early human settlement sites there show that agate, chalcedony, and jasper were used not only for arrowheads and other stony instruments but also for ornamental beads and pendants. 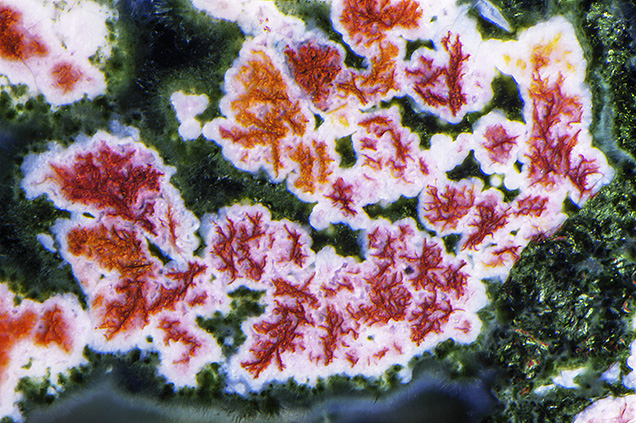 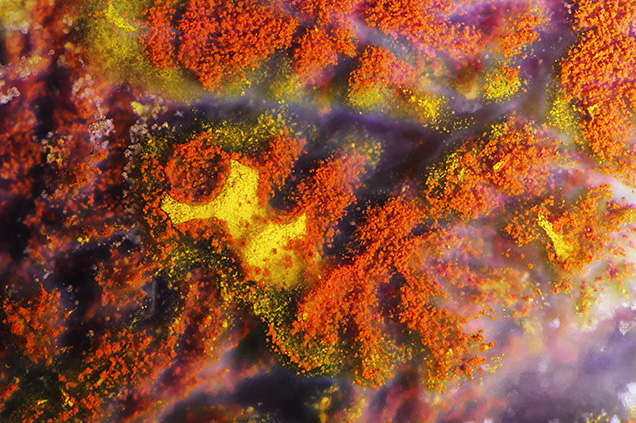 Today, Iranian agates are primarily traded in the city of Mashhad, the largest holy city of Iran and the capital of the northwest province of Khorasan. Several varieties can be found in the market, but plume agates are the most colorful and most sought after. The samples of Iranian agate examined by the authors contained numerous plume structures in a variety of colors including green, yellow, red, white, and orange (figure 1). These plume structures are characterized by elongate billowy inclusions that can resemble clouds of smoke or feathers. The material with predominantly green, white, and orange inclusions is sold as “Bahary” (spring) agate (figure 2). The material that is principally green, yellow, and red is sold as “Paaeasy” (autumn) agate (figure 3). 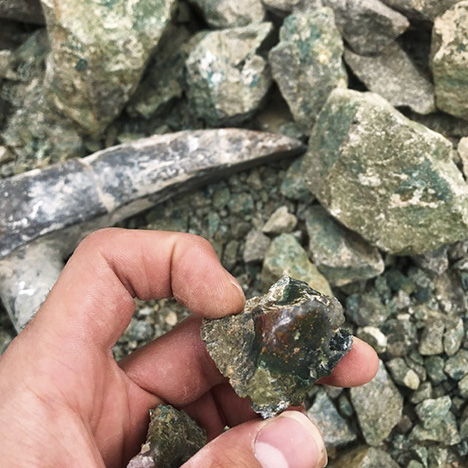 Figure 4. An agate sample collected at the Aysak area in the Ferdows agate field in the southern region of Iran’s Khorasan Province. Photo by Hamid Mir-Blukey.

The samples examined were acquired in Iran by author MMS from Dr. Hamid Mir-Blukey, who has a private mining claim in the Ferdows agate field in the southern region of Khorasan (figure 4). Mining there is done mainly with primitive hand tools at or near the surface, where veins of agate are exposed as they weather out of their volcanic host rock.

While most material from this region is locally traded, the area could become an important global source for plume agate.

Maryam Mastery Salimi is a staff gemologist, and Nathan Renfro is manager of identification, at GIA in Carlsbad, California.

“Condor” agates from the Mendoza region of Argentina are sought after by collectors for their vibrant colors and sharp banding.

An iris agate with a unique growth texture is carved to produce an aurora-like effect.