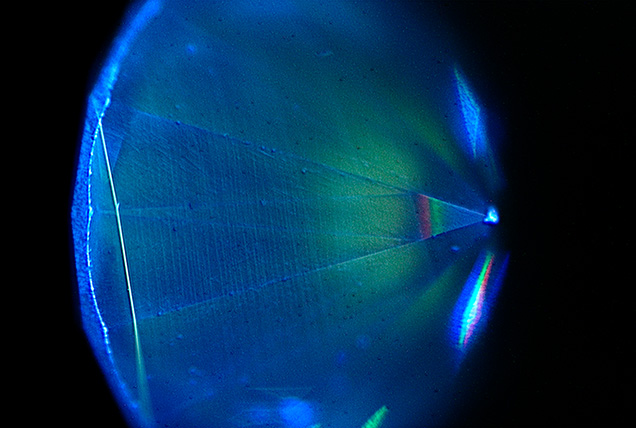 Figure 2. All three irradiated CVD synthetics displayed very weak fluorescence in the DiamondView, as seen in the 1.14 ct sample shown here. All showed the characteristic striations of CVD growth. Image by Sally Eaton-Magaña.

Figure 3. Radiation-related features dominate the CVD synthetic diamonds’ Vis-NIR absorption spectra when collected at liquid nitrogen temperature. Features include the GR1 at 741.2 nm, the 595 nm center at 594.2 nm, the TR12 center at 469.9 nm, a radiation-related peak at 464.3 nm, and the GR2 at 429 nm.

The Vis-NIR and IR absorption spectroscopy and the photoluminescence (PL) spectroscopy were nearly identical among the three specimens, indicating that they were probably grown and treated under similar if not identical conditions. The IR absorption spectra showed very weak 3107 cm–1 and 1344 cm–1 peaks. Based on the integrated area of the 1344 cm–1 peaks (I. Kiflawi et al., “Infrared absorption by the single nitrogen and A defect centres in diamond,” Philosophical Magazine B, Vol. 69, No. 6, 1994, pp. 1141–1147), we determined the single N concentration as about 0.4–0.5 ppm for all three samples. The Vis-NIR absorption spectra showed typical features for irradiated diamonds: the TR12 (a radiation-related feature tentatively ascribed to a divacancy/di-interstitial defect at 469.9 nm), the 595 nm center, and GR1 [V0] at 741.2 nm (figure 3). PL spectra showed a weak SiV– doublet at 736.6 and 736.9 nm along with a very strong GR1 center. PL spectroscopy also indicated the presence of the H2 peak at 986.2 nm and the lack of the 596/597 nm doublet that is normally seen in as-grown CVD synthetics and generally disappears with post-growth treatment. This combination, along with the 3107 cm–1 peak in the IR spectra, suggests these diamonds were HPHT treated before irradiation.

Owing to their extreme rarity and individuality, creating a set of matching natural-color diamonds can be quite challenging. In contrast, synthetic diamonds can demonstrate uniformity in features and appearance due to the manufacturer’s ability to control the growth conditions, defect concentrations, and the subsequent treatment parameters.

Sally Eaton-Magaña is a senior research scientist at GIA in Carlsbad, California.