Selecting Gem Rough: A Guide for Artisanal Miners was researched, photographed, written, and produced by GIA and distributed in Tanzania through a joint venture between GIA and the nongovernmental organization Pact. It is an educational tool to help artisanal and small-scale miners understand the value of rough gem material. The pilot program was launched in four villages in the Tanga/Umba area of northern Tanzania in the first half of 2017. The sites were selected by Pact staff, who also helped deliver the content and monitor the impact of the training. The region produces a variety of garnets (figure 1), sapphire, tourmaline, and zircon. 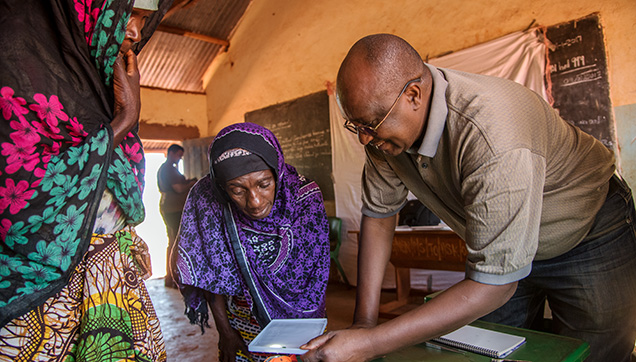 The guidebooks, written in Swahili and showing different types of gem rough found in the area, were distributed to the Tanzanian miners along with small white trays. These trays are used to sort gem rough in reflected or transmitted light (figure 2), which allows stones of higher quality to be separated.

The pilot program reached approximately 200 miners. Participants were surveyed afterward on the effectiveness of the training, and many reported a better understanding of gem quality. Women miners in particular said the training gave them a greater sense of financial independence, indicating that they might be more likely to sell rough on their own rather than rely on men. Using the responses to the survey, Pact calculated that for every $1 invested in the program there was a $12 social return on investment.

In their impact report, GIA and Pact identified areas that might benefit from this resource. GIA has decided to proceed with the project, with plans to include a number of gem localities throughout Tanzania. This expansion is expected to take place in late 2018 and in 2019.