In two recent Lab Notes, we reported on a new type of synthetic diamond: nano-polycrystalline synthetic diamond, known as NPD (Spring 2014, pp. 69–71; Winter 2014, pp. 300–301). Submitted for identification in April 2016 was a 0.70 ct pear-shaped Fancy black diamond (figure 1). The diamond’s infrared absorption spectrum was strikingly similar to that of the two NPD identified specimens mentioned above. It displayed very similar absorption peaks in the one-phonon region (figure 2), which can probably be attributed to nitrogen. 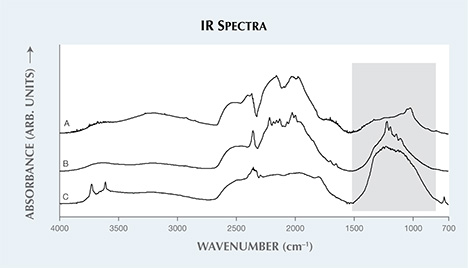 Microscopic examination revealed an abundance of dark graphitized crystal and fracture inclusions, features often associated with black gem-quality diamonds but not unlike those observed in the NPD samples (figure 3). The challenge for gem laboratories, then, is how to separate black NPD synthetic diamonds from their natural black diamond counterparts.

The 0.70 ct pear-shaped diamond was issued a report with a Fancy black color grade and a natural origin of color.

Paul Johnson is a supervisor of diamond advanced testing, and Kyaw Soe Moe is a research associate, at GIA in New York.

A potential new synthetic gem material in the form of a faceted 0.88 ct brownish yellow nano-polycrystalline diamond (NPD) has undergone a full gemological examination, including detailed spectroscopic analysis, for the first time.