Three faceted specimens were recently submitted to the Earth Science and Resources College of Chang’an University by a client who acquired them as synthetic colored diamonds (figure 1). All three specimens were relatively clean to the unaided eye. The RI of the specimens was over the limit of the gem refractometer. The average hydrostatic SG value was 3.21, and all samples were inert under long-wave and short-wave UV radiation. Microscopic examination revealed clear doubling of numerous stringers and some needle-like inclusions (figure 2). All of these features were consistent with synthetic moissanite (K. Nassau et al., “Synthetic moissanite: A new diamond substitute,” Winter 1997 G&G, pp. 260–275). Raman spectra of the samples were obtained using 785 nm laser excitation from three different orientations: parallel to the c-axis, perpendicular to the c-axis, and random orientation (one specimen’s spectra is shown in figure 3). Results for all three samples indicated synthetic moissanite, with the peaks at 149, 767, 789, and 967 cm–1 obtained from the random orientation (see rruff.info). 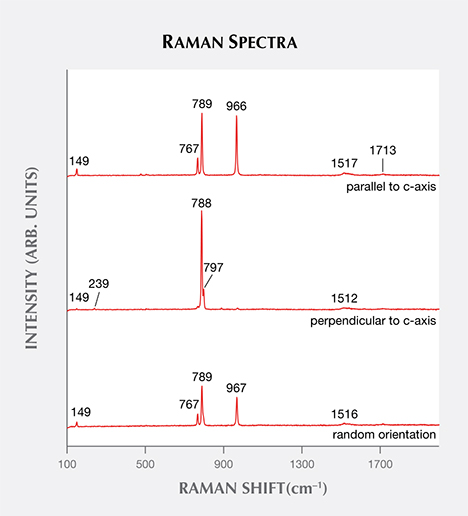 Moissanite (silicon carbide, or SiC) has many polytype structures, including cubic (C), hexagonal (H), and rhombohedral (R). Hexagonal structure 4H-SiC and 6H-SiC (space group P63mc) are the most common polytypes used as gem material. In this study, the characteristic peaks at 149, 767, 789, and 966 cm–1, obtained from the orientation parallel to the c-axis, were consistent with those previously reported for 6H-SiC (S. Nakashima and H. Harima, “Raman investigation of SiC polytypes,” Physica Status Solidi A, Vol. 162, No. 1, 1997, pp. 39–64).

Yanjun Song is with the School of Earth Sciences and Resources at Chang’an University in Xi’an, China. Lu Zhang is with the Institute of Prospecting Technology at the Hebei Mine Bureau in Langfang, China. Yunlong Wu is with the National Testing Center for Gold and Silver Jewelry in Tianjin, China.

Synthetic moissanite is much closer to diamond in overall appearance and heft than any previous diamond imitation; this article reports on how to identify and characterize it.