GIA’s Hong Kong laboratory recently received a white metal ring adorned with a round partially drilled dark gray nacreous pearl measuring 16.30 mm in diameter (figure 1). Externally, the pearl appeared to be a typical bead cultured pearl, routinely referred to in the trade as “Tahitian,” that had formed in a Pinctada margaritifera mollusk. Advanced testing supported this initial observation; a 700 nm feature in the UV-Vis spectrum (A. Homkrajae, “Gem News International: Spectral characteristics of Pinctada mazatlanica and Pinctada margaritifera pearl oyster species,” Summer 2016 G&G, pp. 207–208), a “bumpy” Raman spectrum, and a series of peaks at around 620, 650, and 680 nm in the photoluminescence (PL) spectrum confirmed the mollusk’s identification (S. Elen, “Identification of yellow cultured pearls from the black-lipped oyster Pinctada margaritifera,” Spring 2002 G&G, pp. 66–72).

Preliminary examination with the unaided eye and subsequent microscopic observation revealed characteristic features of an untreated nacreous pearl: soft luster; slightly smoothened platy structure with a few negligible blemishes, pits, and scratches; and no indications of color concentration or coatings. Although the mounting prevented clear observation of the drill hole, some greenish blue material was observed and did not conform to the features expected for a traditional shell bead nucleus. This therefore appeared to be an atypical bead cultured pearl. While not routinely encountered in the trade, this is not the first example GIA’s laboratories have examined. Indeed, some branded products even exist in the market, such as Galatea’s carved atypical bead cultured pearls (“Atypical ‘beading’ in the production of cultured pearls from Australian Pinctada maxima,” GIA Research News, February 13, 2017) with a variety of untraditional nuclei. Further testing might have assisted in identifying the greenish blue material in the submitted pearl, but that would have required the pearl’s removal.

Despite the typical Tahitian bead cultured pearl appearance, real-time microradiography (RTX) quickly revealed a rather uncharacteristic internal structure. Instead of a traditional shell bead nucleus (figure 2, left), a “nucleus” containing a probable electronic “capsule-like” device was exposed (figure 2, right). Greater detail of the device’s structure showed an elongated metal component with coiled wire around one end and two contact points at the opposite end (figure 3). The other notable feature observed was that the radio-opacity of the remaining constituent of the nucleus was not in keeping with that expected of typical freshwater shell. The white outer layer represents the nacreous layers that overgrew the inserted materials, and the nacre thickness also seemed rather thin in comparison to that typically observed in Tahitian bead cultured pearls routinely examined.

Figure 2. Real-time X-ray (RTX) microradiographs showing a traditional freshwater shell bead nucleus in a typical bead cultured pearl (left) and the unusual internal scene within the client’s pearl (right). The majority of the “bead” material within the client’s pearl looks more radio-translucent than the shell bead, and the various thicknesses of the metal components are visible as more radio-opaque areas.

Figure 3. Greater detail of the coiled wire around one end of the metal capsule component (left) and the two contact points at the opposite end (right).

Figure 4. Externally, this specimen with an RFID chip embedded (A) looks no different from bead cultured pearls routinely seen in the market. However, RTX examination revealed a square chip positioned inside a recess within a sawn and reconstructed shell bead nucleus (B and C). The arrow in image C indicates the sawn plane. Photos by Tony Leung.

The pearls were found to contain RFID chips in each nucleus (figure 4A), consistent with previous reports (H.A. Hänni and L.E. Cartier, “Tracing cultured pearls from farm to consumer: A review of potential methods and solutions,” Journal of Gemmology, Vol. 33, No. 7-8, 2013, pp. 239–246). The RTX images clearly revealed an RFID chip positioned within a small recess inside the shell bead nucleus (figure 4C). The supplier stated that the chips are placed slightly off-center to prevent damage from drilling and that the beads are fashioned from freshwater shell, like the vast majority of nuclei used in the cultured pearl industry. The freshwater environment of an intact bead nucleus (before RFID chip insertion) provided by the same company was confirmed by energy-dispersive X-ray fluorescence (EDXRF) analysis. Another characteristic feature of these RFID bead cultured pearls revealed by the RTX work was that the beads were sawn in half prior to the chip’s insertion (indicated by the black line seen in figure 4C when aligned correctly) and then bonded back together.

By connecting a registered smart phone app to an RFID reader, the information saved in the chips may be retrieved (figure 5). The purpose of introducing such technology is to enable consumers to identify, track, and trace the sources of the pearls encountered (“Fukui unveils South Sea pearls with Metakaku nuclei,” Jewellery News Asia, No. 392, 2017, pp. 66–67). 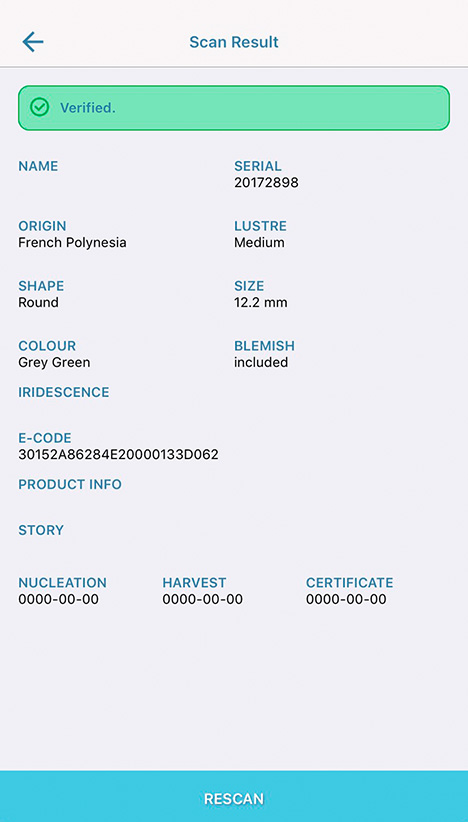 Figure 5. A registered smart phone app (connected to an RFID reader) will display the scan result after an RFID chip is detected. The result shows the information uploaded to a particular chip. The optional information (e.g., product info, nucleation date, harvest date) has not been entered for this sample.

Obviously the RFID beads revealed in the pearls we sourced in no way match the internal structure observed in the client-submitted pearl described in this note. The RFID reader also failed to read the information (if any) stored in the capsule-like electronic device. Thus, we still cannot be certain of the identity of the materials incorporated in the unusual cultured pearl, but we will continue to investigate.

Pearl culturing technologies are forever adapting in order to meet the perpetually high demand. Besides RFID, near-field communication (NFC) technology has also been adopted by some pearl brands (e.g., Galatea and Gyso) to gain market share. One of their selling points is that by simply scanning the pearl with an NFC-enabled smart phone with the registered app installed, digital information such as audio, videos, and photos can be retrieved. It is too soon to tell whether these tracking and marketing technologies for pearls will be widely accepted by the buying public. Nonetheless, GIA will remain alert to these developments.

In 2011, the authors began to see cases of low-quality natural pearls being used as unconventional “beads” for cultured nacre growth.

Although the Pinctada margaritifera oyster usually is associated with the black pearls cultured in French Polynesia, it also can produce attractive large yellow cultured pearls, among other colors.