Figure 1. These Pinctada mazatlanica shells were obtained from Mexico. Left: The shell has a rounded outline, with a nearly equal height and width. The exterior surface exhibits alternating yellowish brown and dark greenish gray colors, with whitish blotches fanning out from the center. Right: The interior view of the shell on the left alongside a smaller example showing a yellowish green nacreous rim with a distinct orient. Photos by Lhapsin Nillapat.

Pinctada margaritifera is a well-known mollusk species of the Indo-Pacific region that produces gray to black pearls. Cultured pearls from the mollusk are often referred to as “Tahitian” in the market. Both natural and cultured P. margaritifera pearls are noted for their characteristic UV-visible spectra. The typical reflectance feature at 700 nm is a key identification attribute for this species (K. Wada, “Spectral characteristics of pearls,” Gemmological Society of Japan, Vol. 10, No. 4, 1983, pp. 3–11, in Japanese).

Pinctada mazatlanica, the so-called Panamanian pearl oyster, is a species closely related with P. margaritifera. Although P. mazatlanica was originally classified as a subspecies of P. margaritifera (R.L. Cunha et al., “Evolutionary patterns in pearl oysters of the genus Pinctada (Bivalvia: Pteriidae),” Marine Biotechnology, Vol. 3, No. 2, 2011, pp. 181–192), in 1961, the taxonomy of the Pinctada genus was revised, and P. mazatlanica was listed as a distinct species due to different shell characteristics and geographical occurrence. P. mazatlanica is extensively distributed along the western coast of the Americas from Mexico to Peru and around the Galapagos Islands. It is considered a native pearl oyster species of the Gulf of California in Mexico and around the Archipelago de las Perlas in the Gulf of Panama (G.F. Kunz and C.H. Stevenson, The Book of the Pearl, The Century Co., New York, 1908, p. 69). The spectroscopic characteristics of this species were believed to be similar to P. margaritifera (Winter 2005 Lab Notes, p. 347), yet this author was unable to find any recorded spectra in the literature.

GIA’s Bangkok laboratory recently studied three P. mazatlanica shells from Mexico (two are shown in figure 1). These shells appeared to have morphology between P. maxima and P. margaritifera mollusks (P. C. Southgate and J.S. Lucas, The Pearl Oyster, Elsevier, Oxford, 2008, p. 60). The rounded outlines were similar to those of P. maxima; in each, the shell’s height was almost equal to the width. The color of the outer surfaces alternated from yellowish brown to dark greenish gray, with rays of whitish blotches fanning out from the center. The inner nacreous rims ranged from yellowish green to dark gray with visibly iridescent overtones resembling P. margaritifera. To investigate reflectance UV-visible spectral characteristics in the dark and light nacreous areas, three pieces were cut from one of the shells (figure 2). 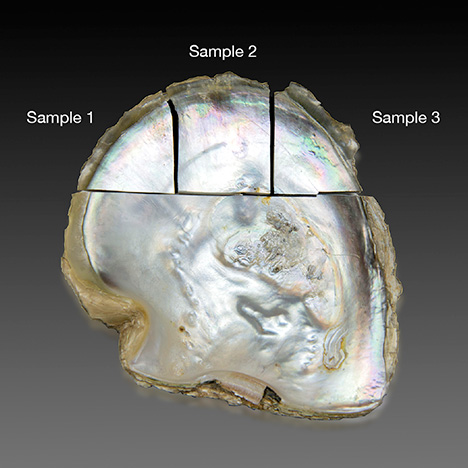 Figure 2. The lip area of one P. mazatlanica shell was cut into three pieces to investigate the reflectance spectral characteristics in the dark and light nacreous areas. Photo by Lhapsin Nillapat.

The dark gray nacre of all the samples exhibited the same spectral pattern as those recorded from naturally colored gray to black nacre of P. margaritifera shells and pearls. The reflectance feature at 700 nm was consistently present in these samples, together with a uroporphyrin feature at 405 nm (figure 3). Uroporphyrin has been established as one type of pigmentation responsible for gray to black tones in some pearl oyster species (Y. Iwahashi and S. Akamatsu, “Porphyrin pigment in black-lip pearls and its application to pearl identification,” Fisheries Science, Vol. 60, No. 1, 1994, pp. 69–71). However, the feature at 495 nm that is often displayed in natural dark-colored nacre from P. margaritifera was not present in these samples, while the spectra collected in white to silver areas lacked the 405 and 700 nm characteristics. The spectra were relatively featureless, with no significant reflectance showing in the visible region. This was in keeping with results obtained from the white to silver nacre of P. maxima and P. margaritifera shells and pearls (S. Elen, “Identification of yellow cultured pearls from the black-lipped oyster Pinctada margaritifera,” Spring 2002 G&G, pp. 66–72). 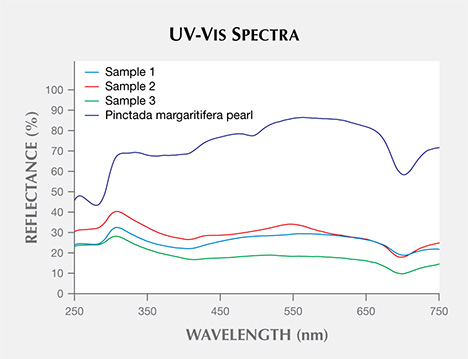 Further studies at GIA’s New York laboratory on P. mazatlanica shells from GIA’s Carlsbad collection confirmed these findings. Additionally, the yellow-green nacre close to the dark gray nacreous rim of the shell showed a broad trough from 330 to 460 nm. This consisted of features between 330 and 385 nm and between 385 and 460 nm. A clear feature at 700 nm was observed, but the one at 405 nm was not evident. The spectra are comparable with natural yellow P. margaritifera nacre samples (again, see Elen, 2002).

Artitaya Homkrajae is a staff gemologist at GIA in Carlsbad, California.

Natural-color saltwater cultured pearls (SWCPs) from Pinctada maxima were studied using UV-Vis-NIR and PL spectroscopy to better understand the mechanisms of their coloration and to separate them from other SWCPs with similar natural colors.

Although the Pinctada margaritifera oyster usually is associated with the black pearls cultured in French Polynesia, it also can produce attractive large yellow cultured pearls, among other colors.