The nuclei used for bead cultured pearl production are usually spheres fashioned from nacreous shell (J. Taylor and E. Strack, “Pearl production,” in P.C. Southgate and J.S. Lucas, The Pearl Oyster, 2008, Elsevier, Oxford, UK, pp. 273–302). The majority of this shell is sourced from freshwater mussels found in the Mississippi and Tennessee River systems in the United States (L.E. Cartier and M.S. Krzemnicki, “New developments in cultured pearl production: Use of organic and baroque shell nuclei,” Australian Gemmologist, Vol. 25, No. 1, 2013, pp. 6–13), and the resulting nuclei typically range between 6.0 and 8.0 mm. When a white round nacreous pearl weighing 28.89 ct and measuring 16.00 mm (figure 1) was submitted to GIA’s Bangkok laboratory for identification, the gemologists were intrigued by what the X-rays revealed. 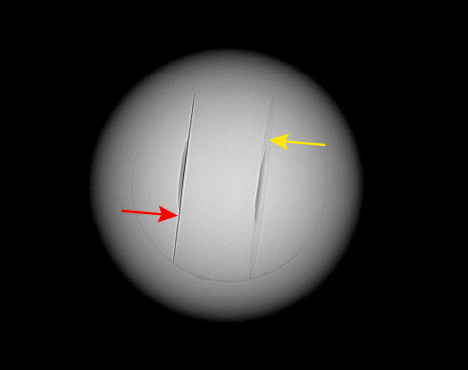 Figure 2. Real-time X-ray (RTX) microradiographs showing a traditional freshwater shell bead nucleus in a typical bead cultured pearl (left) and the unusual internal scene within the client’s pearl (right). The majority of the “bead” material within the client’s pearl looks more radio-translucent than the shell bead, and the various thicknesses of the metal components are visible as more radio-opaque areas.

However, several interesting features were revealed by examination with real-time microradiography (RTX) (figure 2). The bead nucleus was clearly visible in the RTX images and measured approximately 10.21 mm in diameter. This uncommon size was the first indication that this was not a standard bead. Moreover, two sharp planes were clearly visible, another interesting observation since most shell bead nuclei examined with RTX do not show such defined bands. (These are not to be confused with the mostly weak and more diffused bands sometimes seen that relate to the shell’s layered growth structure.) The parallel lines matched structures observed in GIA’s previous research on known samples of bead cultured pearls in which laminated shell bead nuclei were used. In keeping with samples from that research, the most defined line appears when the nucleus is in the optimal direction (figure 2, red arrow) relative to the X-ray source and detector, while the less defined line (figure 2, yellow arrow) appears more like a discoid feature when the alignment is not so perfect. Additionally, a shallow and circular-looking recessed feature in the center of each plane aroused further curiosity. Such structures are not typical of other laminated beads previously examined by GIA.

Laminated shell bead nuclei originated a few decades ago when some Australian pearl farms attempted to produce large pearls to meet demand. However, the high price of the larger shell bead nuclei needed for this forced them to experiment with other materials such as dolomite (Summer 1998 Lab Notes, pp. 130–131; Winter 2001 Gem News International, pp. 332) to produce the large nuclei. Unfortunately, none of the materials were suitable from a commercial perspective. Some farms started bonding strips of shell together to fashion larger bead nuclei of around 10–10.9 mm. The majority of such pearls were produced from second operations. Since this experiment proved more successful, a number of saltwater bead cultured pearls possessing a laminated shell bead nucleus are still encountered in the market today.

GIA labs globally have encountered numerous laminated shell bead nuclei. However, this is the first example with the unusual recessed features, and the reason for their existence is unclear. They are unlikely to be related to damage caused during the manufacturing of the bead. The almost identical positions and appearances suggest that they were created for some purpose. Since the pearl is undrilled, damage resulting from any drilling process (Summer 1995 Lab Notes, pp. 125) may also be eliminated. Another possibility is that they may be related to placement areas for radio-frequency identification (RFID) chips (see Spring 2020 Lab Notes, pp. 134–136 of this issue). But since it is customary to only use one chip per pearl and the recesses are relatively thin with rounded outlines, which differ from the usual deeper square recesses encountered for RFID pearls, this seems unlikely.

The presence of faint banding within the nucleus and the pearl’s X-ray luminescence reaction prove that the bead was fashioned from freshwater shell. Therefore, even though the nucleus is laminated, the pearl is still classified as a “bead cultured pearl.” The only mystery left is the reason for the two shallow circular recesses in the surfaces of two of the shell pieces used to form the laminated bead nucleus.