Large and Fine Demantoid from Russia

The green to yellowish green variety of andradite garnet was first found in the Ural Mountains. It was identified by Finnish mineralogist Nils von Nordensheld in 1864 and presented at the Ural Industrial Exhibition as a new mineral in 1887. Due to the garnet’s high RI and dispersion, it was named demantoid, meaning “diamond-like.” 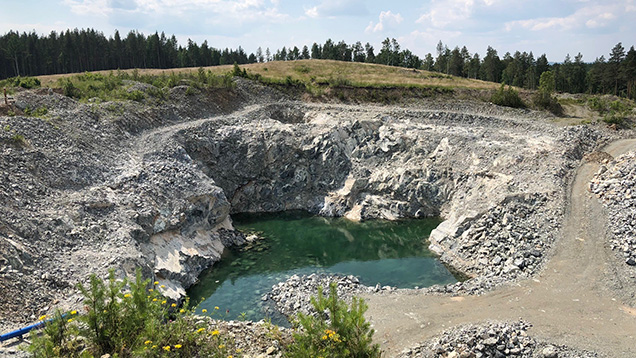 Figure 2. The Korkodin demantoid mine is an open-pit operation. Trucks transport the ore from the bottom of the pit to the nearby washing plant. Photo by Tao Hsu.

Russia remained the only source for demantoid until the mid-1990s, when the gem was discovered in Africa and later elsewhere. Today, Russian demantoid is still highly desired. At the GJX show, the authors saw an 8.49 ct fine-quality demantoid (figure 1) carried by Tsarina Jewels, the largest demantoid seen by the authors at this year’s Tucson shows. It was from the Korkodin mine, located about 80 km south of Ekaterinburg, one of the two active mining operations in this area (figure 2). The Poldnevaya mine lies about 7 km to the north of Korkodin. Both operations are working on primary demantoid deposits with machinery. Together the two mines supply the majority of Russian demantoid.

Another impressive Russian demantoid was a 6.73 ct stone carried by Constantin Wild at the GJX show. This stone was also of top quality, showing high brilliance and fire. The owner informed the authors that the stone was cut from rough obtained in 2019 and possessed the best color he had seen in this material in decades (see figure 6 in the Tucson Overview).

Since Russian demantoid often occurs as small grains with no well-developed crystal forms in the matrix (figure 3), any finished stone above one carat is considered rare. 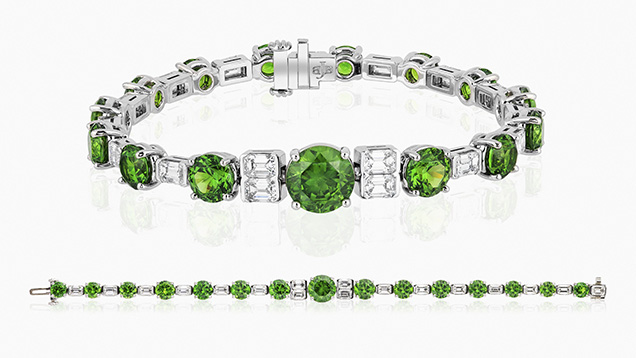 Illustrating the attention being given to this material, the 2019 AGTA Spectrum Award winner under the classical category featured a perfectly matched suite of 15 standard round brilliant cut Russian demantoid garnets. The bracelet by Jeffrey Bilgore included a 3.00 ct center Russian demantoid accented with 14 smaller Russian demantoids gradually decreasing in size (12.20 carats total) and 14 step-cut (4.18 carats total) diamonds all set in platinum (figure 4). Mr. Bilgore said he considers Russian demantoid to be on par with top gems such as Kashmir sapphire, Burmese ruby, and Colombian emerald. The suite came from the estate of a collector and attracted much attention from gem dealers familiar with Russian demantoids before ultimately being used in this award-winning piece of jewelry.

Tao Hsu and Jennifer Stone-Sundberg are technical editors for Gems & Gemology, and Aaron Palke is senior manager of research, at GIA in Carlsbad, California.

Demantoid from Baluchistan Province in Pakistan

Nine demantoids reportedly from a new deposit in the Khuzdar area in Pakistan’s Baluchistan province were recently examined.