Tucson’s first Ethical Gem Fair, a platform for responsibly sourced gemstone suppliers to highlight their products and projects, was held February 3–6 at the Scottish Rite Cathedral. This was the first Ethical Gem Fair in the United States after being held in London and Edinburgh the last three years.

Monica Stephenson, founder and president of Seattle-based Anza Gems, said her travels to East Africa to purchase rough have shown her that miners need to be educated about the value they bring to the supply chain. Ten percent of Anza’s proceeds go to education at the mining communities.

Anza Gems is a partner of Moyo Gemstones, a responsibly sourced gemstone program that was sparked by GIA’s artisanal mining education program. The pilot effort, a collaboration between GIA, Pact, and the Tanzania Women Miners Association (TAWOMA), focused on women miners in Tanga, Tanzania. After initial training, they were more knowledgeable about the mined gemstones but lacked a platform to bring them to the market. Stephenson saw potential here, and together with Pact and TAWOMA she founded Moyo Gemstones. The program provides a marketplace for gemstone transactions, offers free occupational health and safety training, and helps ensure that all miners are legally registered.

Stephenson said that before the program these miners would get a few dollars for gems from a broker, with no visibility into their value in the supply chain. Moyo has changed this through education. “For the miner to understand what she has and the value of those gems, and also to be taking home more like 95% of the export price, and pay her broker, is a complete reversal of the roles,” Stephenson said. “This is truly a paradigm shift in this region. For her to have the income and financial sort of independence is enormous.”

Each gem can be traced back to the miner, Stephenson said, and it’s important to share that story with the consumer. “They need to know that what they’re buying not only makes a difference, and not only does it not cause harm, but it actually is beneficial.”

Brian Cook, owner of Nature’s Geometry (Tucson), began selling crystals as a geology student almost 30 years ago. This took him to a remote area of Bahia, Brazil, where rutilated quartz is mined. He felt a strong connection to the place and made it his second home. Since then he has advocated for the development of resources more sustainable than mining so the community can rely on them when mining ends.

Cook told us about their project in Bahia to benefit the artisanal mining community. The first initiative will raise funds for dust masks for the miners, at least half of whom have no dust protection for underground mining. Second, he envisions a model of investment in regenerative agriculture to create food security, improve nutrition, and implement carbon sequestration. The area’s soil is so rich that it allows for farming of crops such as cacao, coffee, acai, and many others. The third component will be teaching lapidary skills.

Eighty percent of colored gemstones are mined by small-scale and artisanal miners, according to Cook. “This project could serve as a model for our industry at large,” he said. While he recognizes that every situation is different, food, water, and energy will always be the basic needs of every being, and guaranteeing them can uplift a community. 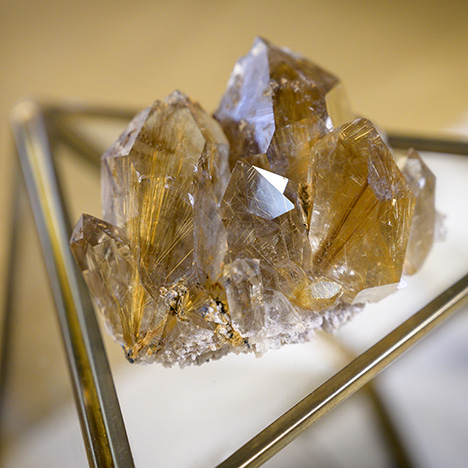 Cook showed us several pieces of rutilated quartz from Bahia, including a sizable piece of rough (figure 2). Nature’s Geometry has been cutting the material since 1989. Each piece is unique, which Cook said is something the younger generation likes.

Cook said the response to the fair has been “phenomenal.” He predicts it will grow in future years, with more vendors and a greater variety of stones.

Ian Bone, manager of Capricorn Gems (Central Queensland, Australia) said the Ethical Gem Fair was created to meet the needs of designers and customers who want a gemstone’s mine-to-market story. “There’s undoubtedly a generational shift happening,” he said. “Customers want to know that the pieces are brought to market in the most responsible manner possible. We see this as the cutting edge of jewelry design and in fact the future of the jewelry industry.”

Bone said that because Australia’s mining industry already has strong regulations for safety, the environment, energy, and land reclamation, it could serve as an example for other mining communities around the world. 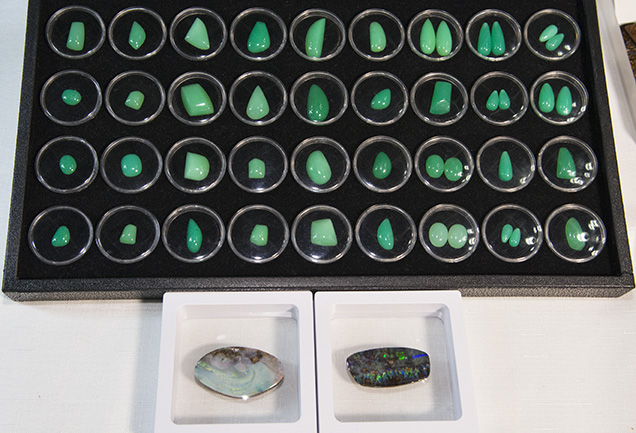 Bone, a Central Queensland native, has built his business around local gemstones: boulder opal, chrysoprase, zircon, and sapphire. He is able to witness the entire process, from mining to cutting to consumer sales. He showed us a selection of chrysoprase from Marlborough, Central Queensland (figure 3). “Marlborough has some of the best chrysoprase in the world,” he said. “Chrysoprase is an unusual gem because you can get a whole set of qualities of that stone, from dollars a pound up to dollars a carat.”

Bone said Capricorn Gems is breaking down boundaries between sourcing, production, and sales. They share their images, videos, and stories of mining with designers for use in their own marketing. One example is a booklet showcasing the works of designers around the world who use stones from Capricorn Gems. “The client knows that their designer knows and trusts the gem supplier and knows where that material comes from,” he said. 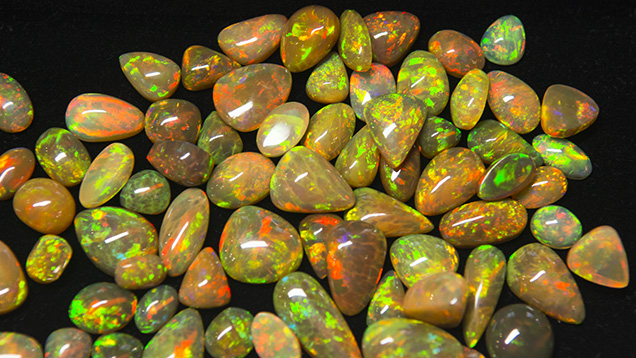 Hewan Zewdi, founder of Agere Treasures (Lynnwood, Washington), was born and raised in Ethiopia and moved to Seattle 14 years ago. There she earned her G.G. through GIA Distance Education. When Ethiopian opal (figure 4) was discovered in 2008–2009, people began calling from home to ask if she had a market for them. “That’s what I study—that’s what I want to do,” she told them.

At the Denver Gem & Mineral Show, Zewdi’s first trade show, she saw Ethiopian opal dealers undervaluing their material and advised them to increase their prices. She also began buying stones from them to sell in her local market in Washington. Her commitment increased when emeralds were discovered in southern Ethiopia. Agere Treasures now offers opal, emerald, amazonite, yellow labradorite, garnet, zircon, tourmaline, and sapphire.

Part of Zewdi’s profits go to a new project to train young women in basic gemology and jewelry design. She also donates books on rocks and gems to the Ethiopian Ministry of Mining, and she assists the organization in obtaining gemstone identification at GIA so the stones can be priced accordingly by exporters in Ethiopia.

“Here everybody has the same mission, the same vision,” Zewdi said of the Ethical Gem Fair. “To give back and get the material traceably and responsibly, without hurting the environment or the artisanal miner, by creating a fair trade and a fair price.”

Buyers at the Ethical Gem Fair were younger people and designers looking for a stone with a story. They want to know about the supply chain for almost every product they use, including jewelry. The show’s suppliers offer as much transparency as possible to their customers, often providing supporting information about the stones, such as images from the mines and cutting factories. Everyone involved in the show sees a growing demand for responsibly sourced gemstones.

Articles on two other exhibitors, Perpetuum Jewels and Columbia Gem House, can be found in the Spring 2019 G&G.

Wim Vertriest is supervisor of field gemology at GIA in Bangkok. Erin Hogarth is a writer and editor at GIA in Carlsbad, California.

Ethical and Sustainable Vertical Integration in the Sapphire Market

The recession of 2008 transforms a gem business into a vertically integrated operation.