Previously, GIA gemologists described an HPHT synthetic diamond whose color was equivalent to Fancy Deep yellowish green due to massive amounts of nickel creating an absorption band at ~685 nm (Spring 2017 Lab Notes, pp. 96–98). They showed that the optically active nickel impurities were preferentially incorporated into the {111} growth sectors, as detected by the photoluminescence (PL) spectral maps and observable color zoning.

Among this set of 25 HPHT synthetic diamonds, none showed the SiV– defect at 737 nm with 633 nm PL excitation while 16 showed detectible amounts of uncompensated boron at 2800 cm–1 in their infrared absorption spectra. In this suite, five showed the 685 nm absorption band generally associated with strong nickel impurities while the others showed a broader, less pronounced absorption band ranging from 650 to 800 nm. The quantity of uncompensated boron was relatively low, with most containing 0.2–5.6 ppb and one near-colorless sample containing 18 ppb. Uncompensated boron is also a common impurity in HPHT synthetics, as it is incorporated during the growth process; these low concentrations did not contribute to the coloration. Additionally, several showed distinctive metal flux inclusions, also indicative of HPHT growth (e.g., figure 2). 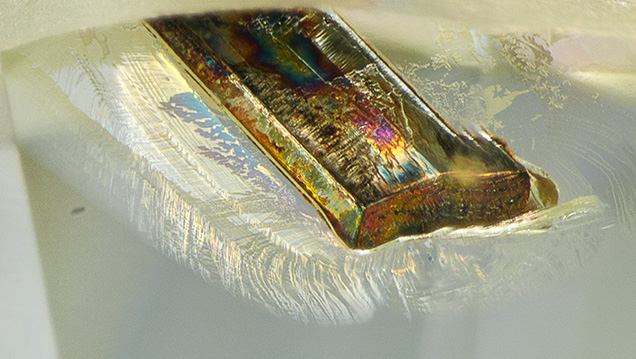 Figure 2. This 0.52 ct Faint yellow-green HPHT synthetic diamond also showed pronounced metal flux inclusions, further proof of its lab-grown origin. This view shows the pavilion facets, with the girdle at the top of the photo. Photomicrograph by Jonathan Muyal; field of view 1.76 mm.

Figure 3. Left: This PL map, collected with 785 nm excitation, shows that the highest amounts of nickel are concentrated within {111} growth sectors of this 0.52 ct Faint yellow-green HPHT synthetic diamond. This false-color map shows the area of the 883/884 nm doublet normalized with the diamond Raman peak. Right: The average PL intensity of the nickel-related 883/884 nm peak within the {111} sectors increases as the equivalent color increases from colorless to Very Light green.

Having such a large dataset of similar but unusually colored HPHT synthetic diamonds in the laboratory simultaneously also allowed us to perform additional analyses to compare them. Photoluminescence maps using 785 nm excitation were collected on the table facet of eight samples, spanning across the various graded colors (figure 3). As expected, the nickel peaks showed the highest concentration within the {111} sectors. From each of the collected maps, we could identify the {111} sectors and determine the average PL intensity of the nickel-related 883/884 nm peaks. When these were plotted according to their equivalent color, the peak intensity was seen to generally increase as the color grade went from the colorless to near-colorless range to Very Light green. Nevertheless, the nickel-related defect at 883/884 nm is not believed to be the same nickel-related defect creating visible absorption. A similar PL map, not shown, was collected on the Fancy Deep–equivalent yellow-green HPHT synthetic diamond (again, see Spring 2017 Lab Notes, pp. 96–98); the nickel intensity in that case was approximately 10× greater than the Faint green samples studied here.

As laboratory-grown diamond manufacturers continue to experiment with their recipes and the process further evolves, we will likely see greater quantities and a wider variety of color ranges.

Sally Eaton-Magaña is a senior research scientist at GIA in Carlsbad, California.

Nickel is found to contribute to the color of a synthetic diamond seen in the New York lab.