HPHT-grown synthetic diamonds are predominantly colorless, yellow, and blue, depending on the control of impurities during growth. Other colors are very rare. In this study, we report on an intensely colored green HPHT synthetic diamond identified in the New York laboratory.

This square-cut synthetic diamond, which weighed 0.42 ct and measured 4.42 × 4.34 mm with a depth of 2.59 mm, was graded as Fancy Deep green (figure 1). Initial observation revealed strong color zoning with narrow, colorless growth sectors on the pavilion that were visible without magnification. An abundance of small metallic inclusions observed under magnification (figure 2) caused the sample to exhibit magnetism. Magnetism is a common but not diagnostic feature in HPHT synthetic diamonds. Natural diamonds may also exhibit magnetism, though only in extremely rare cases (G.R. Rossman and J.L. Kirschvink, “Magnetic properties of gem-quality synthetic diamonds,” Fall 1984 G&G, pp. 163–166).

Upon further examination, the diamond was determined to be type IIb (containing the impurity boron), as seen from its mid-FTIR absorption spectrum (figure 3). The concentration of uncompensated boron in this diamond was 0.013 ± 0.003 ppma. This amount, though detectable, did not contribute to the green color. Many synthetic diamonds grown by New Diamond Technology (NDT) in Russia reportedly also contain this level of boron impurity, as it is incorporated during the growth process (B. Deljanin et al., “NDT breaking the 10 carat barrier,” Contributions to Gemology, No. 15, 2015). DiamondView imaging revealed the typical hourglass growth structure of HPHT synthetic diamonds (figure 4), along with extremely strong phosphorescence for which the presence of boron might be responsible. Noted in the FTIR spectrum was an absorption feature related to nitrogen impurity, a relatively strong peak at 1332 cm–1 caused by N+. It is unusual to see such features in today’s synthetic diamonds. A UV-Vis-NIR absorption spectrum showed strong nickel-related absorption, with a band observed at ~685 nm (figure 5). This center, due to a Ni+ interstitial vacancy, creates a “transparent” window at approximately 555–585 nm, resulting in an observed green color. This diamond was most likely HPHT treated post-growth to activate the Ni+ and cause this intense absorption. It is very rare to see HPHT synthetic diamond with an intense green color attributed to a nickel-related impurity. 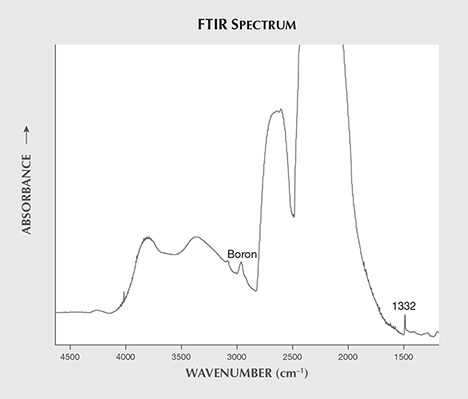 Figure 3. The green synthetic diamond’s mid-FTIR spectrum, which determined that the material was type IIb, showed an uncompensated boron concentration at ~0.013 ppma.

In addition to boron and nickel, this synthetic diamond also contained the SiV– impurity in its crystal lattice. Recent studies have shown that while this impurity is common in CVD-grown diamonds, it may also be observed in HPHT-grown diamonds (U.F.S. D’Haenens-Johansson et al., “Near-colorless HPHT synthetic diamonds from AOTC Group,” Spring 2014 G&G, pp. 30–45). The distribution of Si and Ni impurities were mapped using Raman mapping techniques, and the results proved consistent with previous studies of near- colorless HPHT-grown diamonds also observed in the trade (P. Johnson et al., “Discovery and distribution of the [Si-V]- defect in HPHT-grown gem-quality diamonds,” 2015 GSA Annual Meeting, paper No. 300-12), with both the Ni+ and SiV– confined to the {111} growth sectors. Typically observed in HPHT-grown diamonds, these {111} sectors are the most developed and dominate the diamond crystal’s morphology. The SiV– center does not contribute to the color of these synthetic diamonds, and it is either intentionally or unintentionally incorporated during crystal growth (again, see figure 4).

These spectroscopic and gemological features, with the exception of the green color resulting from nickel, were consistent with typical HPHT synthetic diamond. This is the first instance in which nickel has been reported to contribute to the deep green color of a synthetic diamond. This finding could indicate a new development in growth technology and a new material making its way into the diamond trade. This example was submitted as an undisclosed synthetic diamond and was subsequently issued an identification report.

Developments in synthetic diamond growth technologies (both CVD and HPHT) continue to emphasize the need for careful observation and testing techniques to identify the new types of materials encountered in the gem trade today.

Paul Johnson is supervisor of diamond advanced testing, and Elina Myagkaya is a research lab technician, at GIA’s lab in New York.

Presents the gemological and spectroscopic properties of a suite of synthetic diamonds grown by AOTC using high pressure and high temperature.

A comparison of the magnetic properties of synthetic and natural diamonds.