Akoya cultured pearls are produced by the Pinctada genus, specifically Pinctada fucata (martensii). The mollusk and closely related species are found in the seas off Japan, China, South Korea, and Australia, as well as in the Mediterranean and Arabian Gulf and in the waters of other countries between the Tropic of Cancer and the Tropic of Capricorn such as Vietnam and India.

Akoya pearl farming was first established in the Mie Prefecture in Japan by Kokichi Mikimoto more than a century ago and still exists there to this day. Other suitable locations in Japan such as the waters off the islands of Shikoku and Kyushu, as well as pearl farms in other parts of the world such as Bai Tu Long and Ha Long Bays in the north of Vietnam and in the waters along the southern coast of China from Leizhou peninsula to the border of Vietnam also produce cultured akoya pearls. The round nuclei are commonly fashioned from freshwater shell imported from the USA (T. Hsu et al., “Freshwater pearling in Tennessee,” 2016). The technicians who insert the nuclei usually surgically maneuver one or two bead nuclei, ranging from 1.5 to 1.7 mm, into position within the gonad using a piece of mantle tissue from a donor mollusk to produce the bead-cultured pearls. Akoya mollusks are typically left in the water for 10 to 14 months. The best harvesting time is in the winter season, when cooler temperatures ensure the mollusks produce nacre slowly and more tightly, yielding the highest luster possible in akoya pearls before any processing is applied. Akoya bead-cultured pearls are typically round and range from 2 to 11 mm in diameter, with the most common sizes between 6 and 8 mm.

During the formation of bead-cultured pearls, the accidental formation of some non-bead cultured pearls (NBC), sometimes referred to as “keshi” pearls, may also take place. Those produced by the akoya mollusk are generally very small (the word “keshi” translates in Japanese to “poppy seed”).

GIA’s Bangkok laboratory examined a short strand of what were supposedly the smallest commercially produced akoya bead-cultured pearls available today, together with a selection of randomly picked NBC pearls from the same origin (figure 1), all loaned by Orient Pearl Company. The pearls and the shell reportedly came from Vietnam, and the author was informed that the shell used to culture the pearls was Pinctada fucata (martensii). The graduated strand, consisting of 42 very small bead-cultured pearls, weighed 4.68 ct total, and the pearls ranged from 1.90 to 3.17 mm. Also examined were nine tiny shell bead nuclei between 1.59 and 1.74 mm and weighing 0.30 carats total, as well as 67 loose akoya NBC pearls, ranging from 0.80 mm in diameter to 2.82 × 1.91 × 1.75 mm and weighing 2.31 carats total. The akoya bead-cultured pearls in the strand were round and near-round with a predominantly cream color. The NBC pearls were mostly baroque and predominantly white, with some cream and light gray samples. 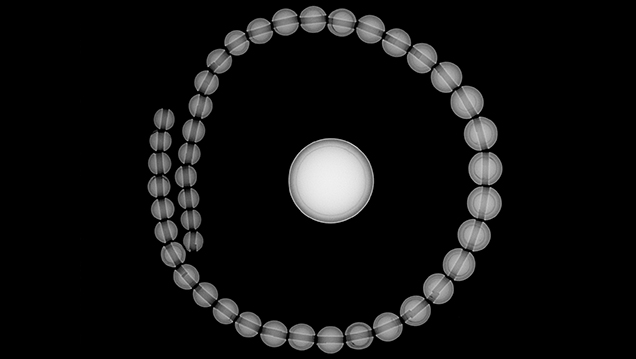 Figure 2. RTX analysis revealed the round shell bead nuclei used in the production of the bead-cultured pearls in the strand. A typical-size (7.70 mm) akoya bead-cultured pearl is shown in the center for comparison. Image by Promlikit Kessrapong.

Although observation down the drill holes with a loupe indicated bead-cultured pearls, real-time X-ray microradiography (RTX) proved this beyond any doubt. A clear bead nucleus was visible in each pearl (figure 2). Characteristic small voids and/or organic features seen in many bead-cultured pearls were present in some cases between the shell bead nucleus and nacre overgrowth. Banded structure within the beads and/or differences in radio-opacity between the shell bead nuclei and nacre were other characteristic features of bead-cultured pearls noted when the pearls were examined at higher magnification. Measurements of five randomly selected pearls revealed nacre thicknesses from 0.20 to 0.41 mm, within the usual commercially accepted range (0.15–0.50 mm) expected for akoya bead-cultured pearls. The majority of the larger pearls showed very good nacre thickness, and none of them were below the minimum standard that might lead to durability concerns.

RTX analysis of the loose NBC pearls revealed typical void-like structures expected for akoya NBC pearls in most of the samples (H.A. Hänni, “A short review of the use of ‘keshi’ as a term to describe pearls.” Journal of Gemmology, 2006, Vol. 30, pp. 51–58; N. Sturman, “The microradiographic structures of non-bead cultured pearls,” 2009). Those with less-defined structures needed further RTX analysis in additional directions to find sufficient evidence of their claimed origin (figure 3). 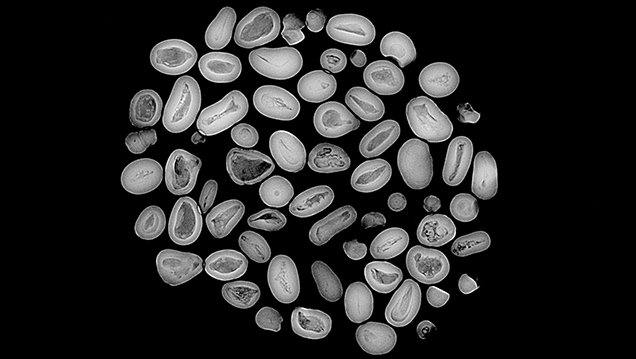 Figure 3. RTX analysis of tiny loose akoya NBC pearls revealed void-like structures in most of them. Image by Promlikit Kessrapong.

Figure 4. RTX analysis of some of the smallest pearls, claimed to be NBC, revealed structures more consistent with natural pearls. Image by Kwanreun Lawanwong.

After additional RTX analysis in other directions, some of the more questionable structures showed features that were clear enough to consider as NBC. Most of the smallest pearls from the group revealed structures that were not consistent with those commonly seen in NBC pearls. Their “meaty” structures, central rounded dark organic features, and/or boundary or fold lines (seen in multi-nuclei/part pearls such as twins or aggregates) are in fact more typical of natural saltwater pearls (figure 4). Advanced analysis such as X-ray computed microtomography (µ-CT) may be required in these difficult cases, but owing to their very small sizes, obtaining clearer imagery is impractical. In this case, the lab gemologists did not find enough evidence to identify these pearls as non-bead cultured. Since most pearls are submitted without any information and laboratory gemologists have to go by what they see, such pearls would likely be considered natural, even if they are not such by definition. This clearly shows the challenges faced by gemologists carrying out pearl identification on some client-submitted items.

Areeya Manustrong is a staff gemologist at GIA in Bangkok.