Throughout history, natural pearls have been found in many species of freshwater mollusk in North American lakes and rivers. They are most abundant within the Mississippi River drainage basin, which provides the perfect habitat for these animals because of the large watershed areas with their underlying limestone substrata (J.L. Sweaney and J.R. Latendresse, “Freshwater pearls of North America,” Fall 1984 G&G, pp. 125–140). Lesser-known sources of natural freshwater pearls are the Colorado River and Brazos River and their tributaries in the state of Texas. However, the best samples are sometimes found in a species named Tampico Pearlymussel (Cyrtonaias tampicoensis) that inhabits the Concho River in West Texas.

The mollusk is distributed from northeastern Mexico into the Concho, Colorado, and Brazos Rivers of central Texas and has been collected by licensed harvesters. Mussel harvesting is restricted to hand collection only, and there is a legal minimum shell size requirement. In addition, several areas in Texas have been designated mussel sanctuaries in order to provide protection and species conservation (R.G. Howells, “The Tampico pearlymussel (Cyrtonaias tampicoensis), shades of the Old West”). Pearlers find mussels by wading into water that is three to four feet deep and feeling for the shells with their toes. Rattlesnakes on the banks and water moccasins and snapping turtles in the murky water (J. Morthland, “Irregular radiance: The rare beauty of Conch River pearls,” Texas Highways, April 2015) pose risks to these adventurers searching for gems.

GIA’s New York laboratory recently received nine loose pearls from Stone Group Laboratories (Jefferson City, Missouri) for a joint study. The pearls ranged in size from 2.95 × 2.45 mm to 14.76 × 13.55 × 13.13 mm. Reportedly recovered from Tampico pearlymussel shells taken from the Concho River, they exhibited colors ranging from purplish pink to orangy pink. Some of the samples also possessed varying degrees of a brownish hue (figure 1). Most of the small pearls in the group exhibited a dull chalky appearance, with some broken or cracked areas of the nacreous surface. The largest pearl in the group (16.59 ct) showed good nacre condition, a high luster, and noticeable orient on its surface. 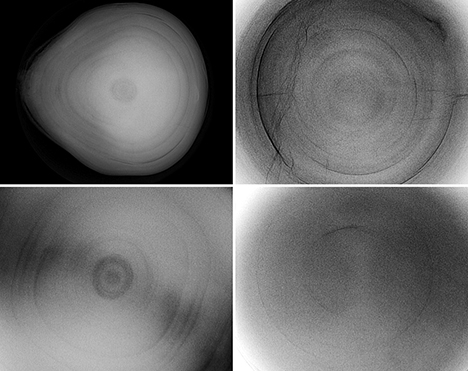 The internal structures of the pearls were analyzed by real-time microradiography, and the majority revealed typical concentric natural growth arcs (figure 2). Dark organic-rich centers were also seen in some of the pearls, as well as internal fissures, cracks, or growth boundaries. There were no indications of bead nuclei or non-bead cultured features (irregular linear or void structures). Additional advanced techniques such as X-ray fluorescence imaging and energy-dispersive X-ray fluorescence (EDXRF) spectrometry revealed noticeable X-ray luminescence and high manganese content, confirming the pearls’ freshwater origin. Furthermore, Raman spectroscopic analysis of all the pearls detected polyacetylenic compounds (figure 3); these are natural pigments responsible for the colors of many freshwater and some saltwater pearls.

The study provided GIA with a rare opportunity to study this unique group of freshwater natural pearls originating from the southwestern United States. Both gemological and analytical data were consistent with their claimed natural and freshwater origin. Pearls produced from this locality often possess beautiful fancy pink, purple, or lavender colors (Summer 1989 GNI, p. 115; Fall 2005 Lab Notes, pp. 259–260), as demonstrated by these examples.

Chunhui Zhou is the manager of pearls research, and Emiko Yazawa is a staff gemologist, at GIA in New York. Bear Williams is the president of Stone Group Laboratories in Jefferson City, Missouri.