The New York lab recently examined the transparent dark orangy red cordierite shown in figure 1. Cordierite, a magnesium aluminum cyclosilicate with the formula Mg2Al4Si5O18, is better known by its gemological name of iolite, which comes from the Greek ios (violet). The term is reserved for the violet through slightly violetish blue gem-quality variety of cordierite. Iolite’s typical colors have been compared to blue sapphires and tanzanites. These colors are thought to come from the charge transfer between Fe2+ and Fe3+ ions.

The stone’s RI ranged from 1.515 to 1.547, with a birefringence of 0.037. This refractive index is much lower than what is listed in the literature for iolite, and we believe the discrepancy is due to the stone’s lower Fe content. Specific gravity was measured as 2.56. The stone showed strong trichroism ranging from orangy red to dark brown to purple. There was no fluorescence observed with exposure to long- and short-wave UV. Raman spectroscopy using 514 nm laser excitation conclusively identified the stone as cordierite (figure 2) with a strong match to the cordierite spectra in the RRUFF database (http://rruff.info). 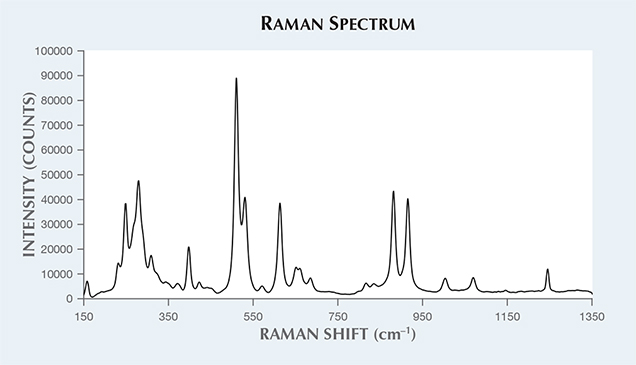 Microscopic examination with fiber-optic illumination revealed fingerprints, rows of flaky whitish inclusions, and large fractures throughout the stone that had been filled with an unknown clarity-enhancing material (figure 3). The larger surface-reaching fractures in the stone appeared to have a “heat wave” appearance (figure 3B), that could be characteristic of the clarity-enhancing material. Cordierite, which is structurally similar to beryl, will easily develop fractures and is commonly clarity enhanced with oil-based fluids. Both cordierite and beryl are structurally similar in that they are cyclosilicates, containing linked six-member rings of tetrahedra that result in channels within the crystal structure. These channels are capable of trapping water along with cations such as from the alkali and alkaline earth metals. The high water content within the stone was represented by the strong overtone bands seen in the Fourier-transform infrared (FTIR) spectrum, with very similar features to that of hydrothermal natural beryl spectra. Laser ablation–inductively coupled plasma–mass spectrometry (LA-ICP-MS) detected trace levels of alkali and alkaline metals. 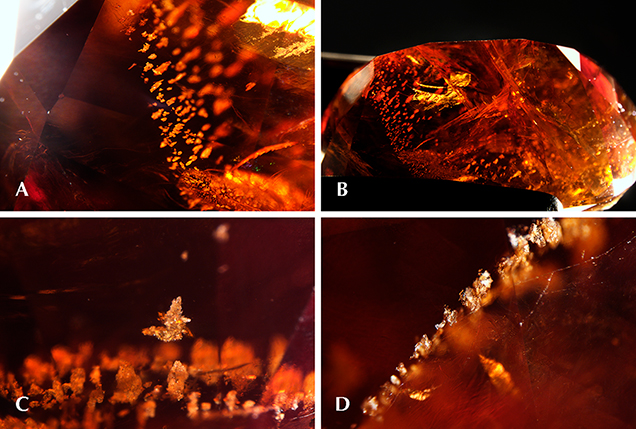 Figure 3. Various inclusions within the dark orangy red cordierite. Numerous partially enhanced fractures are visible (B), along with low visibility on the surface (D). Field of view 4.77 mm (A), 14.48 mm (B), 3.57 mm (C), and 3.57 mm (D). Photomicrographs by Augusto Castillo.

A similar red cordierite, examined in December 2015, was said to be from the Iakora district of Fianarantsoa Province in southeast Madagascar (Spring 2016 GNI, pp. 97–98). The visible absorption spectrum we observed was similar to the one described by Fritsch et al. (figure 4). The spectrum had a decrease in absorption in the 400–500 nm region and low absorption between 600 and 800 nm, resulting in a transmittance window in the orange to red region that produced the color of the stone. These regions of low absorption are characteristic of the trichroic color components noted in the stone. We compared this visible spectrum to a GIA reference spectrum of ordinary iolite. The violet color of iolite is produced by a strong absorption band centered at approximately 580 nm, resulting from intervalence charge transfer to either valence state of Fe cations that might have occupied the divalent and trivalent sites in the crystal structure (substituting for Mg and Al, respectively; see M. O’Donoghue, Gemstones, Chapman and Hall Ltd., London, 1988, p. 77). Although the red cordierite contained a considerable amount of iron, this charge transfer did not appear to be taking place. The potential causes of the color are still unknown but can be linked to manganese (up to 486 ppmw in the orangy red sample and 248 ppmw in the violet sample) or iron, both of which were detected by LA-ICP-MS. This orangy red cordierite appeared to have roughly half as much iron as a saturated violet iolite (approximately 25,000 and 40,000 ppmw, respectively). No other transition metals varied significantly between the orangy red and violet samples. Regardless of the origin of color for the orangy red cordierite, naming this variety “iolite” could be misleading according to the definition of the term.

This is the first time GIA has encountered a cordierite of this color.

Figure 4. In these visible absorption spectra, notice the large window between 600 and 800 nm for the orangy red cordierite sample and the absorption band centered at 580 nm for the GIA reference spectrum of violet iolite.
About the Authors

The gemological properties of the first documented occurrence of red cordierite, from Madagascar, are examined.