Tourmaline and Sapphire from Nigeria

Zoe Michelou, marketing manager for a Nigerian mining company, gave an update in Tucson on the production of gemstones, particularly tourmaline. She primarily handles sales and marketing of rubellite from Oyo State, where there are around 350 pits. There are usually 10 to 15 miners per pit. The miners descend 10 to 20 meters by ladder to the bottom of a pit, and then the pegmatites are blasted and tunneled before extraction. Some tunnels are linked when production overlaps, improving air circulation. Pits can be very close together, although some larger open-pit operations have excavators in the pits and carts to remove the ore. Rubellite is concentrated in pockets within the pegmatites. There are plans to increase mechanization and redesign tunnel orientation and air circulation, thus increasing blasting cycles and production, and new pockets are being discovered.

Miners are provided with food and tools, as well as by profit sharing based on the value of the production. There are plans to include a salary, health care, and a bonus on production. Sometimes miners can recover one ton of rubellite from a large pocket. Large single crystals can easily reach 18 kg or more. The rubellite is kept in a safe and then transported to the city of Ibadan for grading every two to three weeks, depending on production. Currently there are only three to four quality categories. Most of the material is now shipped to Bangkok for final grading and sale. A new facility is planned to perform the final grading in Nigeria, with training of locals to create parcels for international clientele. Many of the rubellite crystals sent to Bangkok weigh 1 kg or more.

There are also alluvial deposits where rubellite pebbles can be recovered without moving too much earth. In Kwara State there is a significant production of indicolite and green tourmaline, including some pink and bicolor. Most of the mining is still near the surface, with a few deeper pits. The first production of indicolite tourmaline sent to Bangkok had crystals of 2–34 grams ranging from commercial to very high quality.

Currently, the Nigerian company is focused on selling rough rubellite (figure 1) through the Bangkok office and trade shows to the international market, especially in East Asia. The clients are mainly rough dealers and manufacturers from China, Hong Kong, and Thailand. This year, the company will start a training program for grading at the mining site in Nigeria. In the future, rough will be sorted and graded prior to shipment to Bangkok.

The parent company that Michelou represents has acquired 1,000 square kilometers for sapphire exploration, prospecting, and mining licenses in the Mambilla Plateau area of Taraba State. Nigeria has produced large quantities of fine-quality basalt-related sapphires. Extraction should start by late spring, with sales expected by the end of 2017 or beginning of 2018. They will only sell rough sapphires in selected markets. The initial washing plant will be able to handle 50 tons of ore per hour. Good-quality material weighing 3 to 5 grams is already being recovered. Security will be tight, and dealers from the Cameroon side of the border currently buying from unlicensed miners have already been restricted from the commercial mining area. Transparent supply from the mine to rough markets is an important part of the marketing strategy. The company will soon implement a detailed grading system for rough sapphires.

The company primarily sells rough but also sells some cut stones to manufacturing jewelers worldwide. Michelou sees an increase in manufacturing jewelers buying rough, including tourmaline and sapphire, and having it cut instead of just purchasing finished stones. By doing so, they can guarantee traceability of the stones all the way to the customer. 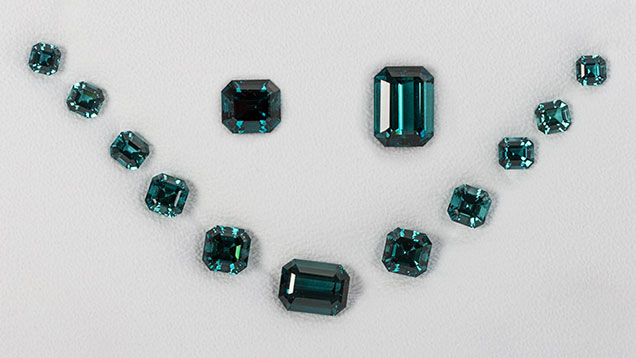 Figure 2. A sampling of Nigerian indicolites after fashioning. Photo by Eric Welch/GIA, courtesy of Zoe Michelou.

Andrew Lucas is manager of field gemology for education at GIA in Carlsbad, California. Tao Hsu is technical editor of Gems & Gemology.