Cuprian (copper-bearing) tourmaline, known as “Paraíba” tourmaline in the trade, has been an important gem since its discovery in 1989. Until now, almost all of the material reported has been classified as the elbaite species of the tourmaline supergroup. Chemical analyses by laser ablation–inductively coupled plasma–mass spectroscopy (LA-ICP-MS), a common technique for origin determination of Paraíba tourmalines, revealed that 13 copper-bearing samples submitted to GIA’s Tokyo laboratory contained substantial amounts of Ca in the X-site. Consequently, they are classified as liddicoatite tourmaline. The origin of these stones is unknown.

Minerals of the tourmaline supergroup are cyclosilicates with the general formula XY3Z6(T6O18)(BO3)3V3W, where X = (Na+, Ca2+, K+, and vacancy); Y = (Fe2+, Mg2+, Mn2+, Cu2+, Al3+, Li+, Fe3+, and Cr3+); Z = (Al3+, Fe3+, Mg2+, and Cr3+); T = (Si4+, Al3+, and B3+); B = (B3+); V = (OH– and O2–), and W = (OH–, F–, and O2–) (e.g., Henry et al., 2011). Tourmaline-supergroup minerals can be classified into three primary groups based on the X-site occupancy: the alkali group (Na+ and K+ dominant), the calcic group (Ca2+ dominant), and the X-site vacant group (vacancy dominant). In each primary tourmaline group, specific species are further determined based on the occupancy of other sites. Thirty-four species have been recognized by the International Mineralogical Association’s Commission on New Minerals, Nomenclature and Classification (IMA-CNMNC; e.g., Henry et al., 2011; Hawthorne and Dirlam, 2011; B. Dutrow, pers. comm., 2017). Elbaite is a sodium-, lithium-, and aluminum-rich species in the alkali group, with the general formula (Na)(Li1.5Al1.5)Al6Si6O18(BO3)3(OH)3(OH). Liddicoatite is a calcium- and lithium-rich species in the calcic group, with the general formula (Ca)(Li2Al)Al6Si6O18(BO3)3(OH)3(OH). Most gem-quality tourmaline has been reported as elbaite. Liddicoatite was first distinguished as a separate mineral species in 1977 (Dunn et al., 1977). Gem-quality liddicoatite tourmaline from Madagascar has been prized for its remarkable color zoning that is typically characterized by triangular zones and three-rayed stars surrounded by oscillatory zonings when it is cut perpendicular to the c-axis (e.g., Dirlam et al., 2002; Pezzotta and Laurs, 2011).

Cuprian (copper-bearing) tourmalines with vivid blue, green-blue, green, and violet colors were first reported in 1989 from Paraíba State in northeastern Brazil (Koivula and Kammerling, 1989). They are now commonly called “Paraíba” or “Paraíba-type” tourmaline in the trade. Fritsch et al. (1990) and Bank et al. (1990) reported that the blue to green colors were primarily due to the presence of trace (or minor) amounts of copper. Years after the initial discovery in the state of Paraíba, similar gem-quality elbaite tourmalines colored by copper and manganese were found elsewhere in Brazil (Shigley et al., 2001; Furuya, 2007), in Nigeria (Smith et al., 2001), and in Mozambique (Abduriyim and Kitawaki, 2005; Laurs et al., 2008). The composition of cuprian tourmaline from all of these deposits has been determined with energy-dispersive X-ray fluorescence spectrometry (EDXRF), electron microprobe analysis, and laser ablation–inductively coupled plasma–mass spectroscopy (LA-ICP-MS; see Abduriyim et al., 2006; Okrusch et al., 2016). No mineral species other than elbaite has been previously reported for “Paraíba” tourmalines except for four pieces of Cu-bearing liddicoatite first reported by Karampelas and Klemm (2010) showing Ca-rich X-site occupancy and three pieces of possible liddicoatite conjectured from the qualitative analysis indicating high Ca (Leelawatanasuk and Jakkawanvibul, 2011). This article reports on the same type of cuprian tourmalines that belong to the liddicoatite species based on the evidence supported by quantitative analysis.

Thirteen tourmaline samples of Paraíba-type colors (figure 1) from unknown geographic origins were examined in GIA’s Tokyo laboratory. These were submitted by different clients in 2016. Standard gemological testing was followed by analyses of the major, minor, and trace element concentration for each sample with LA-ICP-MS. Fluorine was not measured. A Thermo Fisher Scientific’s iCAP Qc ICP-MS was connected to an Electro Scientific Industries NWR213 laser ablation unit with a frequency-quintupled Nd:YAG laser (213 nm wavelength) running at 4 ns pulse width. NIST SRM 610 and 612 glass standards were used for external calibration. Ablation was achieved using a 40 μm diameter laser spot size, a fluence (energy density) of approximately 10 J/cm2, and a 7 Hz repetition rate. Three laser spots were acquired from the girdle of each sample. The composition was initially internally standardized with 29Si using a calculated amount of Si based on the weight percent of pure elbaite in the chemical formula. Twenty-six additional cuprian tourmaline samples submitted by clients were analyzed with LA-ICP-MS for comparison. Their geographical origin was identified using GIA’s tourmaline database. Eighteen of these additional samples were from Brazil, one from Nigeria, and seven from Mozambique.

The data was converted to wt.% oxides and normalized to 100 wt.% and then converted back to ppmw to obtain individual element concentrations, based on 27 O2– and 4 OH– anions per formula. LA-ICP-MS analysis for tourmaline is an incomplete characterization, with critical light elements (H and F) and the oxidation states of transition elements (Fe and Mn) undetermined. In this article, it is assumed that Fe and Mn are divalent, that the B-site is fully occupied by B, and that the X-site is occupied by Na, Ca, and a vacancy equal to 1 atom per formula unit (apfu). Additional assumptions are that the Z-site is only occupied by Al3+ and equal to 6 apfu, while the T-site is occupied by Si4+ and Al3+ and equal to 6 apfu. If Si4+ is greater than 6, the T-site is only occupied by Si4+. The excess Al goes into the Y-site. The priority of ions with different valence states entering the Y-site is (R2+ R3+ R+ > R4+), such that the Y-site is occupied by Mn, Cu, Al, and Li. The common assumption that all iron is ferrous and that OH + F = 4 apfu can result in the misidentification of buergerite as “fluor-schorl” as well as misidentification of the oxy- and fluor- species. The chemical composition presented in this article is not affected by the minor amounts of Fe in the tourmaline (Clark, 2007). The assumption of 4 OH– does not allow for the fluor- or oxy- species to be determined. The major elements, including Ca, Na, Si, Al, and Mg, were verified by comparison of LA-ICP-MS data with electron microprobe data of a secondary tourmaline standard with similar Ca:Na ratios (Dutrow and Henry, pers. comm., 2017).

Microscopic examination of the 13 samples revealed two-phase inclusions, needle-like growth tubes, and fluid inclusions typical of tourmaline. Standard gemological testing resulted in the general range of gem tourmalines such as refractive indices of 1.62–1.64 and specific gravity of approximately 3.06, but the fluorescence under long-wave ultraviolet light was stronger than the usual Paraíba tourmalines, as described later. Chemical analysis demonstrated a calcium-dominant composition. The representative data in table 1 was selected to show the best stoichiometry. All the data points showed liddicoatite, and none were classified as elbaite. In all analyses, Mg was below the detection limit and Fe was less than 0.005 apfu. Based on the primary tourmaline group classification, all 13 calcium-rich cuprian samples are classified as calcic-group tourmaline and the 26 additional sodium-rich cuprian samples as alkali-group tourmaline (table 2, figure 2A). In addition, the 13 calcic-group samples plot as liddicoatite tourmaline in a liddicoatite-feruvite-uvite subsystem ternary diagram (figure 2B). The 26 tourmalines in the alkali group are shown as elbaite in a dravite-schorl-elbaite subsystem ternary diagram (figure 2C; Henry et al., 2011).

Figure 2. A: The 13 cuprian tourmaline samples belong to the calcic group, while the 26 additional cuprian tourmalines belong to the alkali group based on the dominant occupancy of X-site. B: Li, Y-site Fe2+, and Y-site Mg2+ distinguish the tourmaline species as liddicoatite in a liddicoatite-feruvite-uvite subsystem ternary diagram. C: Li, Y-site Fe2+, and Y-site Mg2+ of elbaite samples were further plotted in a dravite-schorl-elbaite subsystem ternary diagram (modified after Henry et al., 2011).

Comparing the data in table 1 with that of liddicoatitic tourmaline from Madagascar (Dirlam et al., 2002) shows that these cuprian samples have more sodium in the X-site—with a greater elbaitic component. Other liddicoatite tourmalines from Canada (Teertstra et al., 1999) have similar sodium (0.365–0.395 apfu) and similar or lower calcium (0.420–0.498 apfu). The sodium contents of liddicoatite from Madagascar and Canada vary with their zonation.

Table 3 shows the samples’ averaged chemical composition for selected minor and trace elements. In cuprian tourmalines from different origins, these have some distinguishable trends (Abduriyim et al., 2006; Okrusch et al., 2016). For example, Brazilian and Nigerian cuprian tourmalines tend to show higher concentrations of Cu than those from Mozambique—which typically have higher Ga than the other two sources. Nigerian stones tend to have higher Pb than those from Brazil and Mozambique. Figure 3 shows the Ga-Pb distribution of the 13 cuprian liddicoatite and 26 cuprian elbaite samples analyzed in this study. The cuprian liddicoatite samples show both high Ga (297–433 ppmw) and high Pb (420–827 ppmw). These combinations of trace elements plot well outside the ranges of any known reference samples in GIA’s database, and therefore their geographic origin could not be determined. 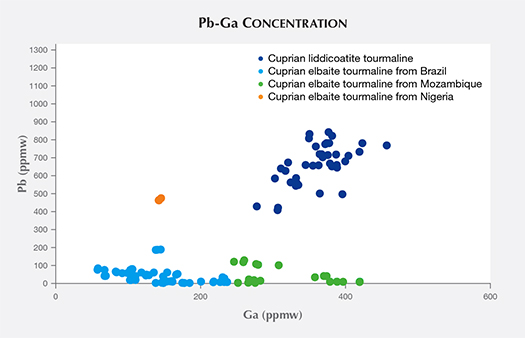 Another remarkable point was the samples’ high concentration of rare earth elements (REE; table 2)—in other words, lanthanides except Pm. Lighter REE (La, Ce, Pr, Nd, Sm, and Gd) showed a higher concentration than heavier REE (Tb, Dy, Ho, Er, Tm, Yb, and Lu). The samples show an exceptionally low Eu content. The high concentration of REEs is interpreted as the cause of their comparatively strong fluorescence under long-wave UV (figure 4).

Although the geographic origin of these cuprian liddicoatite is unknown, this unique chemical property offers directions for further research. Geological studies of the elbaitic cuprian tourmaline deposits in Brazil have been published (e.g., Shigley et al., 2001; Soares et al., 2008; Beurlen et al., 2011), but no detailed study has been carried out for Nigerian and Mozambican occurrences. Teertstra et al. (1999) reported that some liddicoatite crystals have cores that correspond to elbaite with rims of liddicoatite. They proposed three possibilities for the calcium needed to form liddicoatite: mobilization of Ca from earlier-formed pegmatite minerals, introduction of Ca from host rocks, and conservation of Ca through the crystallization of minerals in the pegmatite magma. Major elements can also be used to determine provenance. Henry and Guidotti (1985) established distinct regions to define potential different source rock types of tourmaline using Al-Fe(tot)-Mg and Ca-Fe(tot)-Mg ternary diagrams. Figure 5 indicates that the rock types in which the cuprian liddicoatite was found are Li-rich granitoid pegmatites and aplites. Because these copper-bearing liddicoatite tourmalines are Ca-dominant, they must be from a Ca-rich host rock. Karampelas and Klemm (2010) noted that liddicoatite rough had been found near the Paraíba-type elbaite mine in Mozambique. Qualitative EDXRF analysis of Paraíba-type tourmaline from a new mine reportedly near Nampula, Mozambique, showed a Ca peak (Leelawatanasuk and Jakkawanvibul, 2011). Analysis of the host rock geology around cuprian tourmaline mines in Mozambique may be an important approach. 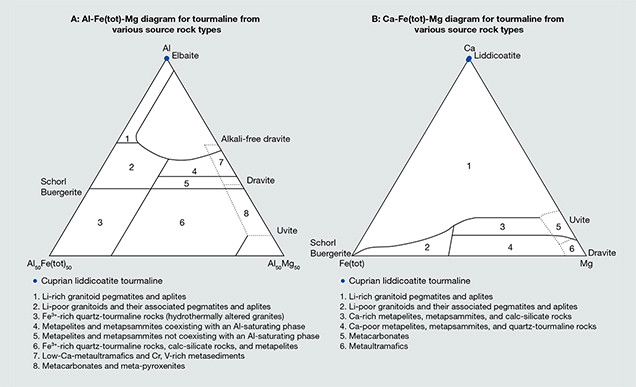 Thirteen cuprian tourmaline samples were identified as liddicoatite tourmaline. Their Cu and Mn concentrations were within the range of other cuprian tourmalines—consistent with their similar blue to green colors. Except for their stronger fluorescence under long-wave UV, presumably caused by high REE concentrations, the samples’ gemological properties were also similar to cuprian elbaite tourmalines. Only sophisticated quantitative chemical analyses can effectively separate liddicoatite from elbaite.

Cuprian liddicoatite tourmaline is not well known, but the material may have already entered the “Paraíba” tourmaline market. Discovering its origin could provide new insights into the geologic growth conditions and chemical variations of tourmaline crystals.

We wish to thank Dr. Makoto Miura and Takuya Sunaoshi of GIA’s laboratory in Tokyo for assisting with LA-ICP-MS testing. We also appreciate the helpful comments and suggestions from Shane McClure of GIA Carlsbad and Dr. Barbara Dutrow of Louisiana State University.

Copper-bearing tourmaline from Mozambique was first recovered in 2001, but its Cu content was not recognized until 2003, and it was not widely sold with its Mozambique origin disclosed until 2005.

An Update on “Paraíba” Tourmaline from Brazil

Vivid blue, green, and purple-to-violet cuprian elbaites, renowned in the gem trade as “Paraíba” tourmalines, continue to be recovered in small amounts from northeastern Brazil.

Unusually vivid tourmalines from the state of Paraiba, in north eastern Brazil, have attracted great interest since they first appeared on the international gem market in 1989.