Gem-quality synthetic zincite from Poland, an industrial by-product of zinc oxide processing, has been available in the market since the early 1980s. In this investigation, conventional gemological methods, spectroscopic techniques, and advanced analytical testing were carried out on 10 rough and faceted samples. The chromophore manganese (Mn), which is significant in natural zincite and can reach 1 wt.% MnO, appears to be negligible in by-product crystals. These crystals also appear to have low to insignificant levels of other potential chromophores such as iron and copper. Inclusions matching previously reported oval and “tadpole-like” inclusions in Polish synthetic zincite were observed and tested by Raman and IR spectroscopy. These inclusions were identified as carbon-bearing material, possibly belonging to soot and/or gases captured during the growth of the synthetic zincite host.

Zincite (ZnO) was discovered in 1810 (Dunn, 1995; Welch, 2008) and mined from marble-hosted Zn-Fe-Mn skarn-type deposits (Hague et al., 1956; Webster, 1983) at the Franklin and Sterling Hill mines of Sussex County, New Jersey. These mines are still considered the only locality for gem-quality natural zincite (Dunn, 1995; Peck et al., 2009; Wilson, 2013). The natural zincites were always aggregates, both massive and small (Nowak et al., 2007). Only a few large gem-quality crystals displaying strong luster and a beautiful bright red color have been faceted (Welch, 2008). Some collectors seek the stone for its rarity and attractive appearance, although a relatively low hardness (4 on the Mohs scale) limits its use in jewelry (Henderson, 1945; Nowak et al., 2007; Wilson, 2013).

During the 1980s, a new form of synthetic zincite emerged from an unnamed foundry in Poland’s Lower Silesia Province (Crowningshield, 1985; Kammerling and Johnson, 1995). This material grew as an industrial by-product in the chimney vents of industrial kilns producing zinc oxide powder, through a process similar to chemical vapor deposition (Nowak et al., 2007). We will refer to it as “by-product zincite” hereafter. These crystals possess better transparency and brighter color than natural zincite. By-product zincites were sold in the jewelry market from the early 1980s until the 2000s, but now they can only be acquired from existing stocks (Kammerling and Johnson, 1995; Nowak et al., 2007).

The properties and formation processes of by-product synthetic zincite crystals from the Olawa foundry in Lower Silesia have previously been studied (e.g., Crowningshield, 1985; Kammerling and Johnson, 1995; Nowak et al., 2007). Insights into their color and the nature of their unusual oval or “tadpole-like” inclusions (Nowak et al., 2007) have remained elusive. In this investigation, rough by-product zincite crystal samples from the foundry in Lower Silesia were chosen for standard gemological observations, elemental analysis by X-ray fluorescence (XRF) and inductively coupled plasma–mass spectrometry (ICP-MS), and spectroscopic analysis in order to find the characteristics that distinguish them from natural material, identify their inclusion features, and provide an explanation for the cause of color.

Figure 1 shows four of the 10 rough by-product zincite crystal samples (0.34–13.85 g) that were analyzed. Two were faceted by author YG (labeled Zincite-L and Zincite-S). Sample zin-10 is a group of five unprocessed rough fragments from a yellow crystal; the remainder of this crystal is the faceted sample Zincite-S. All rough samples were purchased at the Warsaw Mineral Show in September 2010; the seller claimed they were produced at an undisclosed foundry in Lower Silesia, Poland.

Standard gemological testing, visible spectroscopy, and Fourier-transform infrared (FTIR) spectroscopy were performed at the School of Gemology, China University of Geosciences in Beijing (CUGB). Visible spectra of samples Zincite-L, Zincite-S, and ZnO-G were recorded using a LabTech UV-Vis spectrophotometer in the 400–700 nm range with a sampling interval of 1 nm at a rate of 600 nm/min. Mid-infrared (4000–400 cm–1) spectra of rough sample zin-10 were obtained with a Bruker Tensor 27 FTIR spectrophotometer, operating in absorption and reflectance modes with a resolution of 4 cm–1 and 50 scans per sample at room temperature using the KBr pellet method (100 mg KBr and 1.0 mg sample).

XRF results for nine samples (ZnO-LC, Zincite-L, Zincite-S, zin-10, ZnO-G, zin-fs, zin-fc, zin-7, and zin-8) were tested at the Shanghai laboratory of the National Gemstone Testing Center (NGTC), using a Shimadzu EDX-7000 from 11Na to 92U with a 3 mm collimator and a two-minute testing time.

ICP-MS of five samples (ZnO-LC, Zincite-L, Zincite-S, three specimens of the zin-10 group, and ZnO-G) was conducted at Key Laboratory of Submarine Geosciences of the Second Institute of Oceanography, State Oceanic Administration in Hangzhou, using an Elan DRC-e ICP-MS with the U.S. Geological Survey (USGS) standard BHVO-2 measured to monitor accuracy. Small quantities of the five samples were ground into a powder and sieved to obtain a 200 mesh size. Aqueous solutions of the powders were created by dilution of solutions of the powders created using first aqua regia in a Teflon bomb with heating followed by HClO4 and HNO3 in a Teflon bomb with heating. The unit of ICP-MS results was ppmw; detection limits for all elements were lower than 4 ppmw.

Raman spectroscopy was performed at the Chinese Academy of Geological Sciences (CAGS) in Beijing. Six samples (Zincite-L, Zincite-S, ZnO-LC, ZnO-SC, zin-fs, and zin-fc) were analyzed using a Renishaw 2000 laser Raman microspectroscopy system with an argon-ion laser (514.5 nm excitation), 20 mW power, minimum spot size of 1 μm, and spectral resolution of 1–2 cm–1. The oval inclusion in Zincite-S and another unidentified inclusion belonging to zin-fc were also analyzed in situ by Raman spectroscopy.

We compared our results with the Raman spectra and chemical data of two previously tested natural red zincite samples (R050419 and R050492) from the RRUFF database (http://rruff.info). Sample R050419 is a deep red crystal from the Sterling Hill mine, and sample R050492 is a massive deep red crystal from the Franklin mine. No natural zincite was examined in this study due to the difficulty of obtaining such material.

Crystallography and Gemological Properties. The by-product crystals exhibited a hexagonal prismatic and pyramid appearance, consisting of hexagonal prism m {1010}, hexagonal pyramids t {1124} and p {1011}, and single face c {0001} (figure 2), with contact twinning along (0001) following wurtzite structure (Zhao et al., 2006). The samples’ colors ranged from reddish orange to yellow to greenish yellow, and all of them were transparent, with a subadamantine to vitreous luster (figures 1 and 3). Their RIs were over the limit of the refractometer (RI = 1.78). With a handheld spectroscope, absorption bands were only seen in the blue to violet regions. The samples’ specific gravity, measured hydrostatically, ranged from 5.66 to 5.70. These properties were consistent with previous reports (Crowningshield, 1985; Kammerling and Johnson, 1995; Nowak et al., 2007). 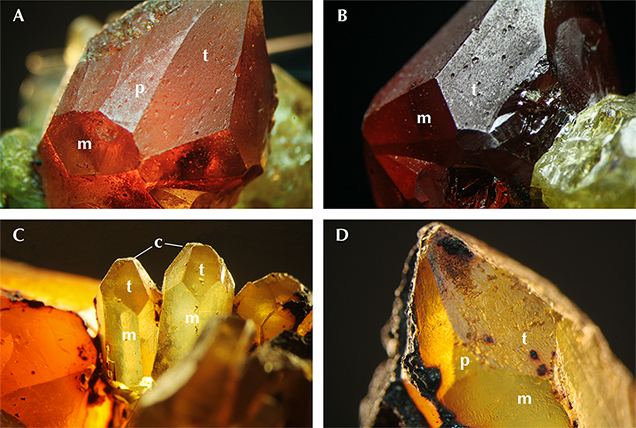 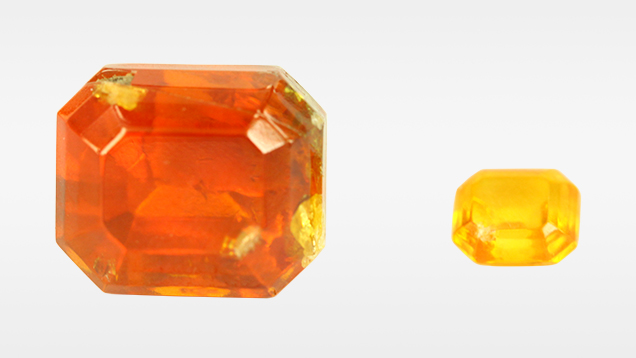 Chemical Composition. XRF testing suggested that the samples were composed of almost pure zinc and oxygen. To investigate the potential chromophores of by-product zincite, the powders of five samples were tested by ICP-MS. The results showed that Mn levels were negligible, ranging from 1.53 to 7.55 ppm with a mean of 3.38 ppm, corresponding to previous reports (Kammerling and Johnson, 1995; Nowak et al., 2007). These levels were all dramatically lower than Mn contents in natural material (approximately 1 wt.% MnO; see Webster, 1983; http://ruff.info). Iron contents in by-product samples were relatively high among nine potential chromophores, ranging from 38.31 to 104.92 ppmw with a mean of 68.74 ppm; the contents of other elements were lower than 30 ppmw (table 1; figure 4). 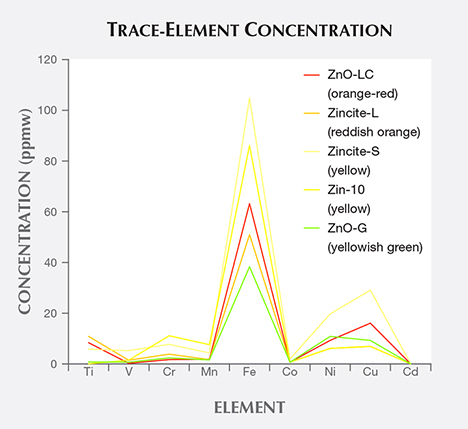 Figure 4. The nine potential chromophore elements of five by-product zincite samples were tested by ICP-MS. In all five samples, Fe content was higher than the other eight elements; the concentrations of each of the non-iron elements are lower than 30 ppm.

Visible Spectra and Cause of Color. The visible spectrum of reddish orange Zincite-L displayed a wide absorption band from 550 to 400 nm, covering the green to violet regions (figure 5). Yellow Zincite-S revealed a broad absorption band between 480 and 420 nm in the blue to violet region, while yellowish green ZnO-G absorbed only violet light from 450 to 400 nm (figure 6). 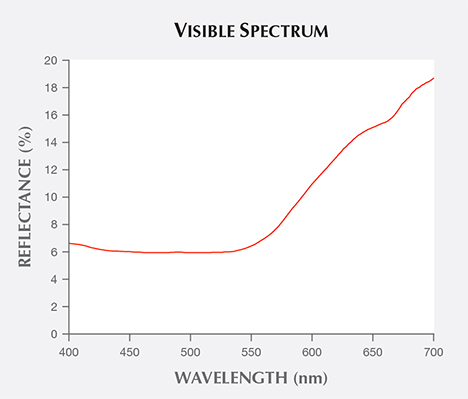 Figure 5. The visible spectrum of reddish orange by-product sample Zincite-L showed that it absorbed light in the green to violet region, from 550 to 400 nm. 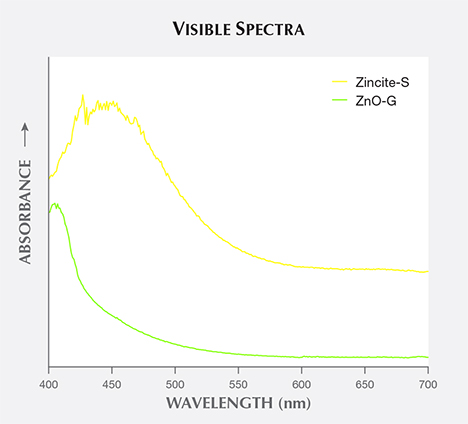 There is no clear relationship between the material’s color and its chemical composition, and the contents of potential chromophore elements were low, although the yellow samples had relatively higher Fe contents than orange to red or yellowish green samples (again, see table 1 and figure 4). The cause of various colors observed may be related to structure rather than chemical composition. These structural factors include increasing amounts of band gap absorption from defect states (Kammerling and Johnson, 1995), lattice defects with electron donors such as neutral zinc atoms (Nowak et al., 2007), and either oxygen deficit or zinc excess within zincite (Mikami et al., 2005; Karipidis et al., 2008).

Raman Spectra. Raman spectra were obtained from sample Zincite-L with its c-axis oriented parallel and perpendicular to the laser beam, together with five other samples (Zincite-S, ZnO-LC, ZnO-SC, zin-fs, and zin-fc) whose c-axes were randomly oriented with respect to the laser. In addition, the spectra from two natural samples, taken from the RRUFF database, were analyzed. The unoriented Raman spectra were similar, so one representative spectrum of Zincite-S was chosen (figure 7). The Raman peaks of zincite were divided into three groups: 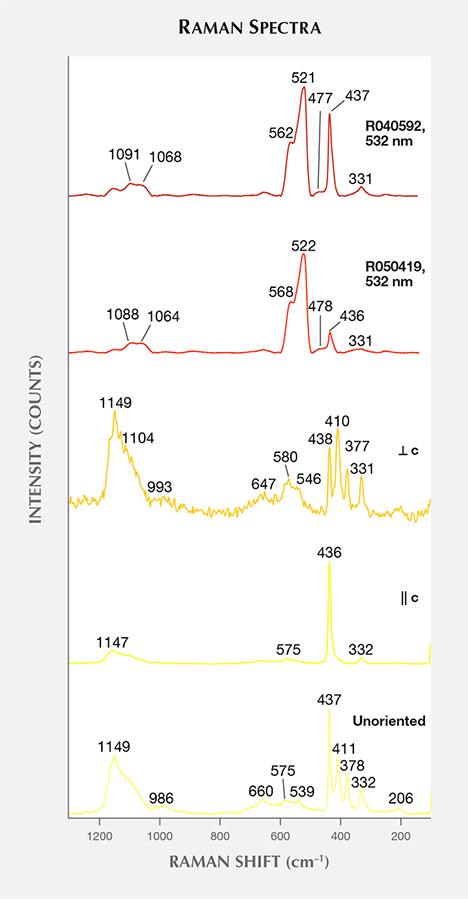 Figure 7. These Raman spectra of zincite, from top to bottom, belong to natural samples R050492 and R050419 from the RRUFF database (both unoriented) and three by-product samples from this study: Zincite-L (⊥c-axis), Zincite-L (|| c-axis), and Zincite-S (unoriented). Spectra are vertically shifted for clarity. 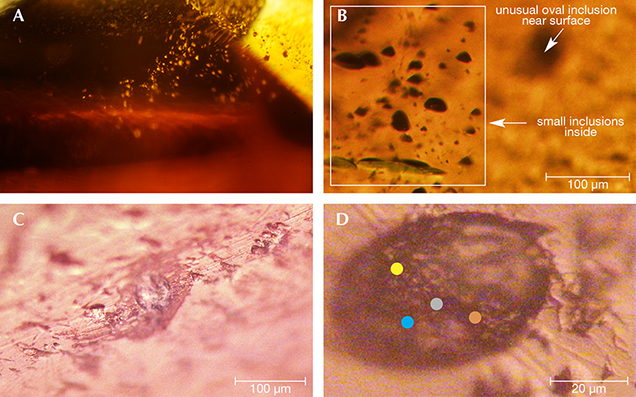 Figure 8. A: Small inclusions were observed in the pavilion of Zincite-S; field of view 2.5 mm. B: When the internal features of Zincite-S were examined with magnification, the inclusions shown in figure 8A came into focus, but the oval inclusion near the surface was blurred. C: The round dot in the middle is the same oval inclusion as in figure B, shown in reflected light. D: This oval inclusion in Zincite-S was also observed and photographed in situ when Raman spectroscopy was performed. The colored dots represent analysis spots. Photomicrographs by Yujie Gao. 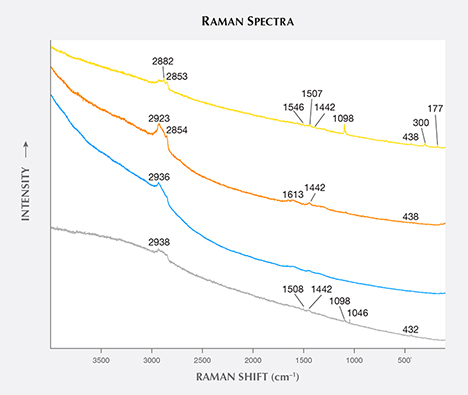 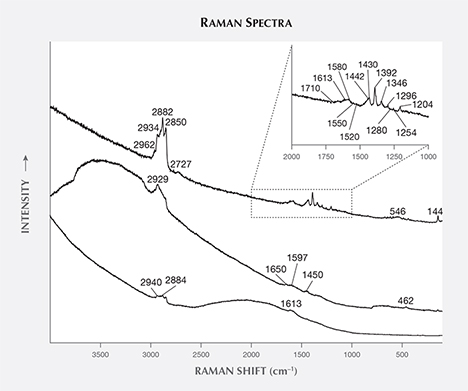 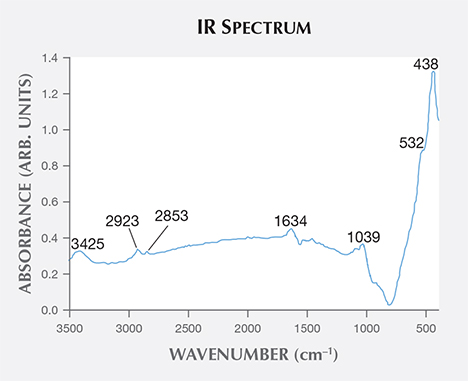 Figure 11. In the IR spectrum of rough sample zin-10, the peak at 438 cm–1 belongs to the zincite crystal, while a series of bands at 2850 and 2920 cm–1 indicate the C-H stretching mode of some possible carbon-bearing materials.

The Raman peaks of the oval inclusion more closely matched peaks of carbon-bearing soot than those of individual organic gases. Thus, the Raman results might be contributed mainly by soot and supported by some individual gases.

The oval inclusions reported by Nowak et al. (2007) and in this paper were quite different from the fluid inclusions, liquid film negative crystals, growth tubes, and cloud inclusions in natural zincite (Kawano, 2008). Although lab-grown synthetic zincite has not been reported for gemstone use, the oval inclusion composed of carbon-bearing materials (possibly soot and/or gases) might not occur in lab-grown zincite because of the accurately controlled original materials and reaction processes (Pasko et al., 1976; Nause and Nemeth, 2005; Karipidis et al., 2008).

The authors would like to thank Prof. Pu Wang and Drs. Yingxin Liu, Mingyue He, Xiaoyan Yu,Ye Yuan, and Xuemei He at CUGB, along with Prof. Wenyi Xue at CAGS, for their help in analysis and discussions. Dr. Jie Li and Dr. Jihao Zhu at Key Laboratory of Submarine Geosciences of the Second Institute of Oceanography, State Oceanic Administration in Hangzhou, China, are thanked for their help with ICP-MS testing. Ms. Ling Du at the Shanghai laboratory of the NGTC is thanked for her assistance with XRF testing. The thoughtful and constructive comments by reviewers and editors are gratefully acknowledged. This research was partially supported by Grant No. 41373055 from the National Science Foundation of China.

Synthetic Gem Materials in the 2000s: a Decade in Review