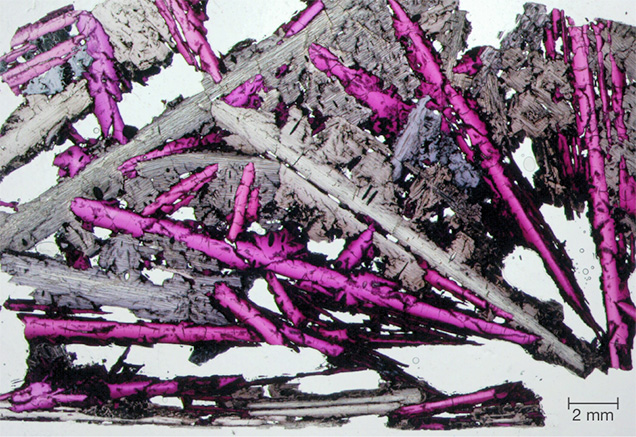 Technogenic corundum contained in metallurgical slag represents a potentially unique source of gem material. Since the 1950s, slags have been studied for their secondary uses. Their mineralogical and petrographic attributes have been documented, but to date there have been virtually no studies from a gemological standpoint.

X-ray powder diffraction analysis (XRD) was performed on two slag samples taken from the waste products of chromium ore processing by thermite reaction at a refinery located in Russia’s Ural Mountains. These specimens showed the presence of corundum (α-Al2O3), the rare phase diaoyudaoite NaAl11O17, and a spinel-group mineral. For the spinel-group mineral, electron microprobe analysis (EPMA) indicated significant amounts of Mg, Cr, and Al. As seen in figure 1, the corundum contains transparent purplish red crystals up to 2.5 cm in length embedded in a diaoyudaoite matrix. The crystals may be elongated and prismatic, irregularly formed, or rounded. Gemological testing including refractometry, specific gravity measurements, and reaction under short-wave (254 nm) and long-wave (365 nm) UV. The UV reaction (figure 2, left) was consistent with natural and synthetic ruby (for in-depth analytical procedures and results, see E.S. Sorokina et. al., “On the question of technogenic ruby in the slags of Cr-V production,” Mine Surveying and Using of Mineral Resources, Vol. 2, 2010, pp. 33–35, in Russian). Microscopic examination of the samples showed features such as gas bubbles and irregular growth lines, both of which are inconsistent with natural corundum. Most significant was the presence of a metallic-phase chromium that appeared in several forms, such as needles, dendrites, and rounded or irregularly formed black solid inclusions with metallic luster. The metallic chromium was most frequently observed along the ruby parting planes (figure 2, right); it is an inclusion that has never been detected in naturally occurring corundum or in any synthetic analogues.

Laser ablation–inductively coupled plasma–mass spectrometry (LA-ICP-MS) and EPMA showed high Cr content (4.3–7.7 wt.%), most likely linked to the capture of micron-sized metallic chromium inclusions during the measuring process. We also found 135–270 ppmw of Mg, 30–70 ppmw of Ti, and 5–10 ppmw of V. Fe, Ga, Ni, Pb, and Pt were found to be below detection limit by both methods. This was the first time LA-ICP-MS had been applied to technogenic ruby.

The identification of metallic-phase chromium inclusions, coupled with trace-element chemistry, will serve to separate these ruby slag materials from natural and other artificial analogues.