Cobaltocalcite is a pink to purple variety of calcite. The mineral is popular as a collector’s item because of its striking purplish pink color, which is caused, as the name suggests, by the presence of cobalt. Cobalt occurs in calcite in octahedral coordination as Co2+ (E. Fritsch and G.R. Rossman, “An update on color in gems. Part 1: Introduction and colors caused by dispersed metal ions,” Fall 1987 G&G, pp.126–139).

Standard gemological testing of these translucent stones revealed strong double refraction with an RI of 1.49–1.66 (as expected for a carbonate material) and an SG of approximately 2.70. The reddish purple cobaltocalcite exhibited a very weak purplish pink reaction to long-wave UV radiation and an inert reaction to short-wave UV. The purplish pink stone had a moderate orangy pink reaction to long-wave UV and weak pink to short-wave. Magnification revealed white particulate flakes of a fibrous nature forming bands in the reddish purple specimen, while the purplish pink one contained pronounced irregular fibrous inclusions forming a mosaic pattern in areas (figure 2).

The UV-Vis-NIR spectrum of the reddish purple cobaltocalcite wafer (figure 3) showed a dominant absorption band at 543 nm and a small peak at 431 nm. The pink wafer only showed a weak absorption feature at 543 nm. Color calculations (see box A in R. Lu, “Color origin of lavender jadeite: An alternative approach,” Winter 2012 G&G, pp. 273–283) were consistent with the respective reddish purple and purplish pink color of the two specimens (figure 3, inset). 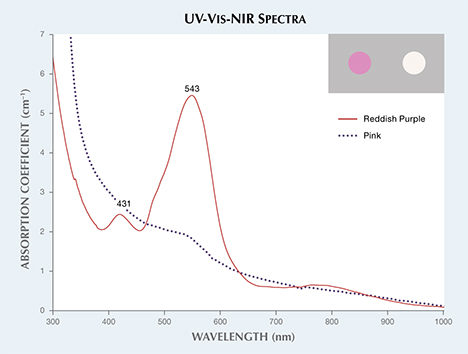 Figure 3. UV-Vis-NIR spectra in the 300–1000 nm region showed broad absorption bands at approximately 431 and 543 nm in the reddish purple cobaltocalcite, and a weak broad band at 543 nm in the pink stone. Inset: The reddish purple and pink stones’ CIE L*a*b* color coordinates (71, 47, 24 and 96, 3, 4, respectively) are reproduced from their UV-visible spectra.

Elemental analysis was performed using laser ablation–inductively coupled plasma–mass spectrometry (LA-ICP-MS). Besides the main constituent calcium, both the reddish purple and the purplish pink cobaltocalcites showed significant amounts of Co at 5673 and 730 ppmw, respectively. The reddish purple sample’s higher concentration is consistent with a higher Co level produces a more saturated color. The concentration of Co is consistent with the intensity of the 543 nm absorption bands in the visible region of both samples. The purplish pink cobaltocalcite also showed 8719 ppmw of Mn. Manganese can cause pink to purple color in appropriate concentrations, so its contribution to the purplish pink color in this material may require further analysis.