Nature’s Geometry
In this video, Brian Cook explains the next step in the evolution of his unique optic disks: larger pieces that display a striking rainbow of concentric color bands.

At the 2014 GJX show, Brian Cook (Nature’s Geometry, Graton, California) showed us innovative optical disks made of colorless quartz featuring a drilled tube containing pieces of brightly colored gem and mineral rough. The tube is subsequently sealed with clear quartz. When the disk is viewed face up, the insert’s reflections permeate the disk with bright color.

For this year’s show, Cook’s “wheel of light” design evolved into larger sizes with more intriguing reflective effects. Seen front-on, the new disks produced concentric colored reflections. The first we saw measured approximately 4 cm (1.57 in.) in diameter and featured Brazilian emerald, Paraíba tourmaline, and haüyne insets (haüyne is a brittle sodium calcium sulfate that provides rich blues). One innovative feature is that the viewer could see different colors depending on the viewing direction. From various directions the disk was suffused with bands of rich green, electric blue, or royal blue color.

According to Cook, this new product takes the color and amplifies it. There is a chamber within the quartz, which he polishes before inserting the colors he wants. Because no faceting is involved, all the colors are blended together. Cook said his passion for Paraíba tourmaline was the starting point. 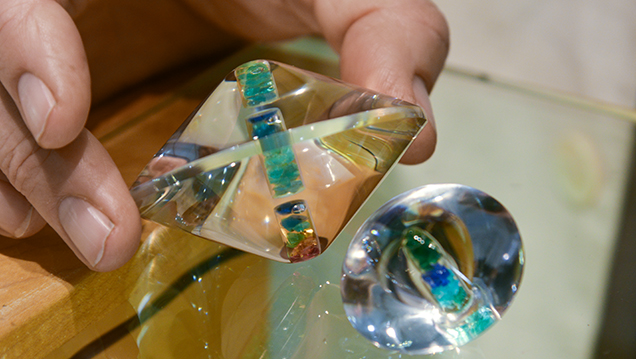 Figure 1. This edge-on view of the “wheel of light” reveals its construction. Photo by Duncan Pay/GIA; courtesy of Nature’s Geometry. 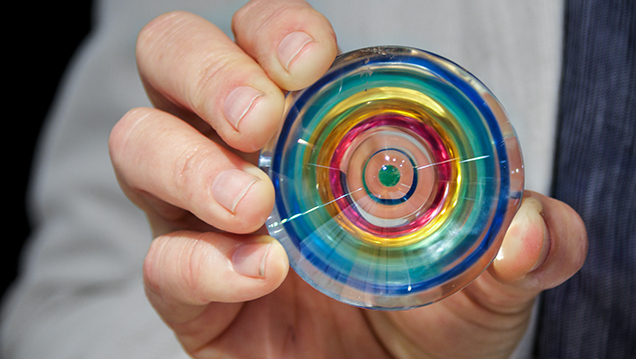 Cook also showed us a smaller optic disk set in a handmade platinum pendant set with diamond and melee-size Paraíba tourmaline from the Brazil Paraíba mine in Parelhas, Rio Grande do Norte. This piece combined the unusual optic effects of the center, which featured more Paraíba tourmaline and haüyne, with a conventional suite, which besides the pendant included a pair of earrings set with similar optic disks.