Todd’s Gems
Todd Wacks outlines how garnets believed to be “regular” Tanzanian rhodolite when discovered in the late 1980s turned out to be rare color-change pyropes instead. In this video, he demonstrates their strikingly intense pink-to-purple color change under different light sources.

The gems were pinkish purple in daylight and showed a color change from intense pink in warm incandescent light to purple—almost like a fine amethyst—in cool LED light. Wacks said the larger stones display the most pronounced color change. Very similar color change phenomena have been reported for other purple “pastel pyropes” from Tanzania, Sri Lanka, and Madagascar.

The rough had been stuck in a safe deposit box for years, he said, because most potential buyers assumed it was rhodolite, saw the inclusions, and lost interest. A consortium including Doubrava, Wacks, and well-known gem artist Meg Berry recently acquired the 2–4 kg of rough, cut a few pieces, and discovered the color change. Wacks has been promoting the gem since then.

The group sent samples to Dr. George Rossman (California Institute of Technology, Pasadena), San Diego gemologist Kirk Feral, and GIA. According to Wacks, the gems are approximately 80% pyrope, 10% spessartine, and 10% almandine, with an RI of 1.736. (This material will be the subject of a more detailed paper in the Winter 2015 G&G.)

vdAaco
Jewelry designer Mary van der Aa presents her jewelry designs, which feature a variety of gems including “hot pink” tourmalines from well-known mines in San Diego County and color-change pyrope garnets from Tanzania.
Sharing booth space with Wacks was colleague and jewelry designer Mary van der Aa (vdAaco, Vista, California). She produces jewelry designs for many of the gems he cuts, including pastel pyropes and pink tourmalines from some of the mines in San Diego County (figure 2). Her jewelry also features stones cut by renowned gem artist Meg Berry. 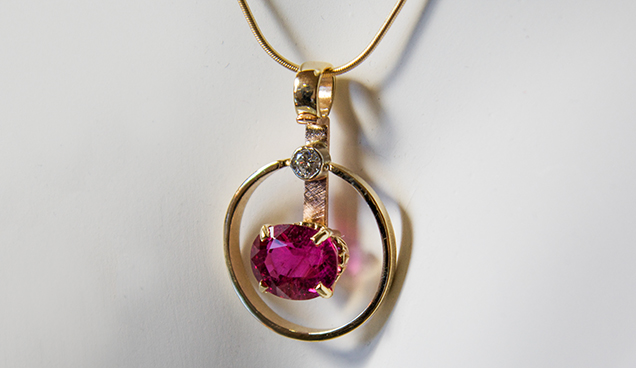 Figure 2. This hand-fabricated 14K rose gold and yellow gold pendant by Mary van der Aa features a 6 ct “hot pink” tourmaline from the Stewart mine, cut by Todd Wacks. Photo by Duncan Pay/GIA; courtesy of vdAaco.
About the Author