The excitement of being the first person to observe a pearl’s interior is always foremost in one’s mind when performing microradiography tests on a newly submitted specimen. Baroque pearls in particular have a higher probability of revealing something unusual (see Fall 2013 G&G Lab Notes, pp. 172–173), since they often contain internal voids that are ideal for filling if exposed by damage or excessive drilling.

A light yellow and cream baroque pearl (figure 1), weighing 10.97 ct and measuring 12.74 × 11.60 × 11.14 mm, was recently submitted with seven others to the Bangkok laboratory for a GIA Quality Assurance Report, which provides rapid identification for sorting goods. Prior to microradiography, the pearl immediately appeared suspect because it was circled by an eye-visible band that indicated some “work” had likely been carried out. This was confirmed by examination with a loupe and microscope, which revealed a lustrous, transparent bonding agent. Small black impurities of an unknown nature were present in the bonding agent (figure 2). The type of work performed on the pearl was instantly confirmed by microradiography (figure 3). Looking at the microradiograph, it was obvious that two coiled wire fillings had been placed in the void between two hollow pearl pieces.

Figure 2. The area between the two parts assembled to form the “pearl” revealed creamy areas of deterioration where the bonding agent met the pearl components (left) and very small black impurities of an unknown nature trapped within the agent (left and right). Photomicrographs by Nick Sturman; magnified 70×. 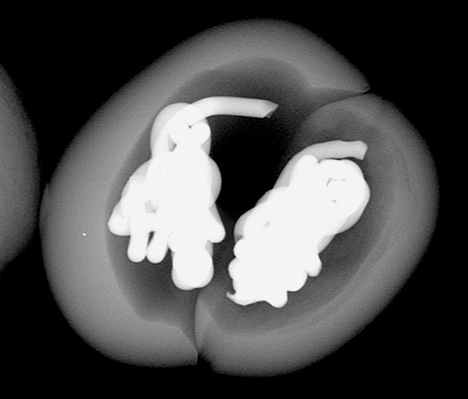 Figure 3. The internal structure revealed two very distinct pieces of coiled wire (metal is radio-opaque) within voids whose outlines did not match. The mismatched outlines helped prove that two separate specimens were combined to form the new “pearl.” Image by Nanthaporn Somsa-ard.

This is not the first time that metal wire has been encountered in pearls (see K. Scarratt, “Notes from the Laboratory,” Journal of Gemmology, Vol. 20, 1986, p. 95), but it appears to be the first time two different hollowed halves have been assembled with a piece of wire in each. While there is little doubt that this specimen was fabricated to increase its weight and create a “single” pearl, the alterations were so severe that they removed critical internal structure, making the components difficult to identify. The two specimens may have been natural pearls with internal voids, bead-cultured pearls with voids around the bead (as is common), non-bead cultured pearls, or any combination of these. We therefore concluded that the “pearl” should be described as “undetermined” but filled.