CVD-grown synthetic diamonds continue to become more abundant in the gem market, as evidenced by several reports from major diamond-grading laboratories during the past year (e.g., C. Even-Zohar, “Synthetics specifically ‘made to defraud,’” Diamond Intelligence Briefs, Vol. 27, No. 709, 2012, pp. 7281–7283). In December 2012, three CVD synthetic diamonds were submitted to GIA’s Mumbai laboratory. In keeping with the evolving technology of the CVD process, the gemological and spectroscopic characteristics of these type IIa synthetic diamonds suggested that they experienced different growth and/or treatment histories.

One sample was a 0.93 ct very light brown (O to P range) rectangular step cut with a VVS2 clarity grade due to the presence of pinpoint inclusions and graining. Viewed under crossedpolarizers it showed heavy strain, with high-order birefringence colors. The photoluminescence (PL) spectra acquired at liquid-nitrogen temperatures using various laser excitations were dominated by the emission of [N-V]0 and [N-V]– centers (with zerophonon lines at 575 and 637 nm, respectively). These ZPLs are widened by high levels of strain and have been previously studied in CVD synthetic diamonds (W. Wang et al., “CVD synthetic diamonds from Gemesis Corp.,” Summer 2012 G&G, pp. 80–97). The [N-V]0/– peaks for this sample had full-widths at half-maximum (FWHM) of 0.43 nm and 0.35 nm, respectively. These are relatively broad compared to colorless diamonds, but consistent with the high strain observed under crossed polarizers. The 596.5/597.2 nm doublet commonly observed in “as-grown” CVD synthetic diamonds was weak, as was the 736.5/736.9 nm doublet attributed to [Si-V]–. Notably, the [Si-V]– emission was too weak to detect with the 514.5 nm laser excitation. Infrared laser excitation at 830 nm resulted in many emission peaks in the 850–880 nm region, dominated by a sharp peak at 878.5 nm whose origin has not been conclusively identified. The DiamondView fluorescence was primarily red due to the strong [N-V] centers. Although CVD-characteristic violet-blue dislocation patterns were observed, growth striations could not be discerned (figure 1A). The sample did not phosphoresce. The PL features observed, the [N-V]0/– widths, and the DiamondView behavior were similar to those reported for near-colorless CVD synthetics produced by Apollo, Inc. (e.g., W. Wang et al., “Latest-generation CVD grown synthetic diamonds from Apollo Diamond Inc.,” Winter 2007 G&G, pp. 294–312). 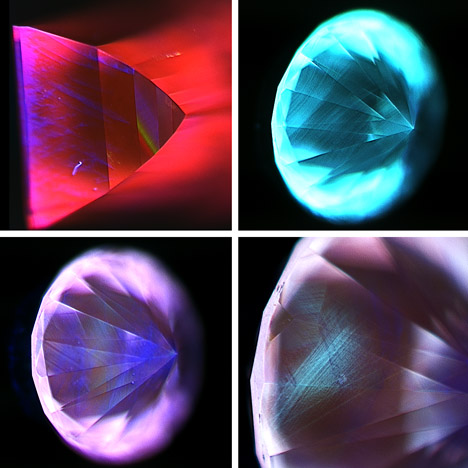 The other two samples were round brilliants weighing 0.52 and 0.57 ct. Both received G color and VS1 clarity grades. The clarity grades were affected by pinpoint inclusions and small fractures. Both round brilliants were weakly strained, revealing loworder (gray and brown) interference colors. They shared several PL spectroscopic traits, including emissions from [N-V]0/–, [Si-V]–, H3 (503.2 nm), and weak N3 (415.2 nm) centers. The 596.5/597.2 nm doublet was not observed in either specimen. The absence of this feature, combined with the presence of multi-nitrogen defects such as H3 and N3, suggests that they had undergone post-growth high-temperature annealing to remove the asgrown brown coloration (again, see W. Wang et al., 2012). The FWHMs for the [N-V]0 and [N-V]– centers were 0.21 nm and 0.16 nm, respectively, for the 0.52 ct round, and 0.23 nm and 0.22 nm for the 0.57 ct sample. These were comparable to the narrowest widths reported for natural diamonds and newer-generation HPHT-treated CVD synthetics produced by Gemesis Corp., and consistent with the low levels of strain detected.

The round brilliants exhibited distinct behavior when examined using the DiamondView instrument (see figure 1, B–D). The 0.52 ct sample showed greenish blue fluorescence and clear growth striations, as well as strong green-blue phosphorescence. These observations were akin to those for HPHT-treated CVD synthetic diamonds produced by Gemesis (again, see W. Wang et al., 2012). Although green-blue phosphorescence was also observed for the 0.57 ct sample, its DiamondView fluorescence images were primarily purplish pink, with violet-blue dislocation bundles and a patch of greenish blue fluorescence. This fluorescence combination in a CVD synthetic diamond had never been observed at a GIA laboratory. The purplish pink fluorescence color was attributed to [N-V] centers. Comparison of the Raman normalized PL intensities of the peaks revealed that the [N-V]0 and [N-V]– peaks were approximately 57% and 68% more intense in the 0.57 ct round than in the 0.52 ct sample. This may explain the difference in the DiamondView fluorescence responses of these synthetic diamonds. It is possible that the 0.57 ct round was HPHT annealed at a lower temperature.

The gemological and spectroscopic observations for these three samples emphasize the variations that might be possible through different growth procedures and subsequent treatment for near-colorless to lightl brown CVD synthetic diamonds. Nevertheless, the specimens could be readily identified as synthetic by careful analysis of data from a combination of laboratory techniques.