Hydrogrossular or hydrogarnet is a translucent to opaque, water‐bearing calcium aluminum silicate garnet that commonly shows microcrystalline texture. It has a range of colors: brown, colorless, green, gray, pink, and yellow. The most popular is the shade of green known in the trade as “Transvaal jade” or “African jade.” Recently, the GIT-Gem Testing Laboratory (GIT-GTL) received two samples of hydrogrossular garnet for identification: the light yellow carved pendant (~70 ct, 36 × 21 mm) and the honey brown oval cabochon (8 ct, 15 × 12 mm) shown in figure 1. These are not typical colors used for jade imitations.

Standard gemological testing of the honey brown cabochon showed a specific gravity of ~3.66 and a refractive index of ~1.71, while those of the light yellow piece were undeterminable due to the nature of the mounting and carving. Nonetheless, both stones exhibited weak red fluorescence to long-wave UV and were inert to short-wave UV radiation, and displayed massive fine-grained aggregate structures with a translucent glassy appearance (figure 2, left), which was quite different from the coarse-grained aggregate structure of jadeite (figure 2, right).

Figure 3. Raman spectra of the honey brown and light yellow samples (blue and red lines, respectively) as compared to the reference spectrum of grossularite from the RRUFF database (green).

The identity was also confirmed by advanced testing. The Raman spectra of both samples showed dominant peaks at 374, 415, 548, 825, and 879 cm–1 and other smaller peaks at 246, 278, 508, 627, and 1005 cm–1 (figure 3) that matched perfectly with the spectrum of grossularite in the RRUFF reference database (R040065). Semi-quantitative chemical analyses of both stones revealed enriched contents of silica, calcium, and aluminum, which are closely consistent with grossularite, a calcium-aluminum garnet.

Figure 4. The infrared spectrum in reflection mode of the honey brown sample (blue line) exhibits characteristic reflectance peaks of hydrogrossular garnet at 616, 843, 866, and 954 cm–1, as compared with the spectrum of the hydrogrossular reference sample (purple line). The spectrum of the light yellow sample was not measured due to the nature of the carving.

The infrared spectrum of the honey brown cabochon sample, measured in reflection mode between 580–1400 cm–1, showed characteristic reflectance peaks at 616, 843, 866, and 954 cm–1 that are similar to the spectra of the hydrogrossular reference sample (figure 4) as well as green hydrogrossular (see Fall 2015 GNI, pp. 342–343). Note that the reflectance spectrum should be almost identical to the transmission spectrum of the sample, and the same features should be observed in both cases.

The infrared spectra of both samples, measured in transmission mode between 1000 and 5000 cm–1 and displayed in % transmittance, showed very strong broad absorption bands between ~3000–4000 cm–1 that are somewhat similar to the spectrum of our hydrogrossular reference sample (figure 5), and coincide with water-related absorption bands of hydrogrossular (>5 wt.% H2O) centered at 3598 and 3662 cm–1 (see G.R. Rossman and R.D. Aines, “The hydrous components in garnets: Grossular-hydrogrossular,” American Mineralogist, Vol. 76, No. 7-8, 1991, pp. 1153–1164). In comparison, our grossular (tsavorite and hessonite) samples reveal much narrower absorption bands between 3500–3700 cm–1 (figure 5). Thus, the presence of very strong broad (water-related) absorption bands has confirmed that both stones submitted for investigation were indeed hydrogrossular.

In summary, the gemological properties, Raman spectra, and chemical compositions of the light yellow and honey brown samples are consistent with those of grossular garnet. However, the infrared spectra showing characteristic transmission peaks of hydrogrossular at 616, 843, 866, and 954 cm–1 and very strong occurrence of structural water (i.e., significant OH replacing Si in tetrahedral sites) have confirmed that these two stones are indeed hydrogrossular rather than grossular garnet. It is worth noting that one of the materials commonly used to imitate jade is fine-grained aggregate hydrogrossular garnet, not single-crystal garnet. 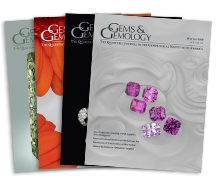 Bangles submitted for identification are found to be not jadeite jade, but hydrogrossular garnet, an unusual choice for this form.