Fura Gems hosted its first sales event for rough Mozambican rubies in August and September 2021. The international gem mining and marketing company has assets in Colombia (emerald), Australia (sapphire), and Mozambique (ruby). After previous sales events for Colombian emeralds in the first months of 2021, the firm now offered its rubies to the trade for the first time.

Mozambican rubies have been available in the trade since 2009, and the region quickly became one of the most important sources for the red variety of corundum. Fura is only the third company to bring rubies to the trade in a formalized tender. During the first years after the deposit’s discovery in 2009, gems were recovered by artisanal miners and traded locally.

In 2014, the first large-scale sale of Mozambican rubies by an organized mining group took place. During that tender, Gemfields offered nearly two million carats of rough ruby, and they have hosted 14 auctions since then. Mustang Resources hosted a rough ruby tender in 2017, which was not well received by the trade. Fura took over existing ruby mining permits and equipment in Mozambique from various companies, including Mustang Resources, acquiring the largest ruby mining license in the country.

Invited buyers were able to view Fura’s rubies in Jaipur and Bangkok, locations that host the largest colored stone manufacturing industries in the world. Each company was able to view the stones over two days in a secured space. Precautions against COVID-19 included a limited number of attendees per day, which caused the entire event to last more than 24 days across the two locations. This allowed all potential buyers ample time to inspect the rough rubies. 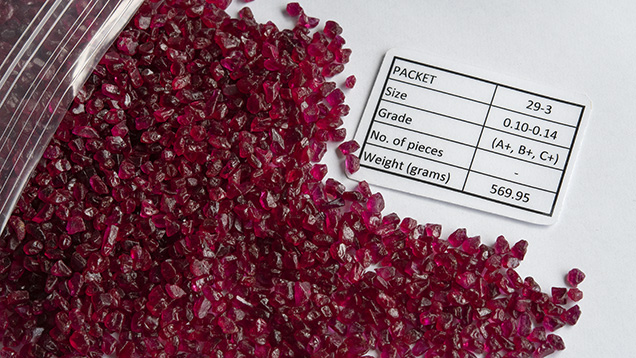 Figure 2. The majority of the stones offered were on the smaller side (below 0.5 g). These lots were highly desired by manufacturers for their intense colors and bulky appearance, which will result in smaller finished stones with a saturated bodycolor. Photo by Wim Vertriest; courtesy of Fura Gems.

The rough gems were offered in pre-graded schedules, based on size and color. The grading system was designed with the gem cutting process in mind, especially aiming for the most commonly used calibrated sizes. Stones with similar hues are put in the same category, creating separate classes for stones with purer red color vs. those with a stronger orangy/purplish tint. Stones with lower saturation are separated from those with stronger saturation. Specific grades are designed to highlight those with lighter colors that would result in fancy sapphires such as pink and reddish orange.

All stones were offered as found in the mine and untreated. A significant percentage of Mozambican rubies can benefit from heat treatment to lighten the color, but this decision was left to the final buyer. While heat treating rubies might improve their appearance, it can also lower the value in the current market. This is especially true for larger stones.

The material showed a wide range of red tints, including strong orangy and purplish colors, but most goods still fell within the color range of ruby. Some stones had lighter saturation that could result in fancy sapphires, especially pinkish materials. This is in line with the regular production from Montepuez, Mozambique, that we have seen over the last decade. Rubies with a dark tone, sometimes referred to as “closed color,” were rare at this tender. All the material showed some fluorescence under long-wave UV, a feature that is absent in certain types of classic Mozambican ruby.

Over 63 kg of rough ruby was offered (figures 1 and 2). The vast majority of the rough weighed under 0.5 g, but with a bulky shape that would result in a good yield. A few hundred stones weighed more than 0.5 g, and some exceptional pieces exceeded 2 g.

The rough rubies had the typical rounded crystal appearance of gems found in secondary deposits, as was confirmed by Fura, which mines the material from gravels that contain a higher concentration of rubies. This is in contrast with primary deposits, where gems are extracted directly from the host rock.

Evaluating rough rubies is a challenging affair. Before assigning a value to a parcel, buyers had to account for each stone’s final shape and cutting style, weight, and potential improvement through treatment. They submitted closed bids via an online platform before the closing date. On closing day, Fura reviewed all the offers and, once accepted, notified the successful buyers.

The company reported that 35 of the 47 lots sold, including all high- to medium-grade lots. They also announced that the price per carat for goods in the calibrated sizes exceeded expectations. According to several ruby dealers, this category is in highest demand and the material was most attractive.

This auction comes at a time when the industry is struggling for rough stones, as many of the regular supply chains have been disrupted by the COVID-19 pandemic. The manufacturers have a clear hunger for rough rubies, though they also have limited financial reserves. Nevertheless, the addition of Fura as a Mozambican rough ruby supplier, along with Gemfields and the artisanal mining community, makes for an exciting change in the gem scene.

We had the opportunity to talk with Rupak Sen, vice president of sales and marketing for Fura Gems in Dubai. Founded in January 2017, Fura holds mining assets in Colombia (emerald) and Mozambique (ruby).

A new mining operation in Montepuez is profiled.