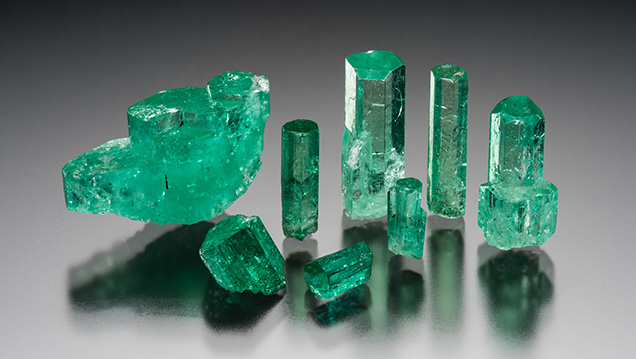 We had the opportunity to talk with Rupak Sen, vice president of sales and marketing for Fura Gems in Dubai. Founded in January 2017, Fura holds mining assets in Colombia (emerald) and Mozambique (ruby).

In Colombia, Fura Gems owns and operates the iconic Coscuez mine (D. Fortalechéet al., “The Colombian emerald industry: Winds of change,” Fall 2017 G&G, pp. 332–358). During its long history, this mine has produced some of the finest gem-quality emeralds, such as the 1750 ct Guinness emerald crystal. In the 1970s, Coscuez accounted for nearly 90% of the world’s emerald production, but mining virtually halted during the civil war in the 1980s. In the 1990s, artisanal mining picked up and small licenses were issued by the government. Each license consisted of one tunnel, and many were dug. The approach was very basic, with no scientific exploration or use of engineering to construct the tunnels. People knew that emeralds were associated with white calcite veins, but they had no way of knowing how rich or extensive these veins would be. In the 2000s, Hernando Sanchez acquired and combined all of the small licenses. He has partnered with Fura Gems, which is doing large-scale studies and surveys at Coscuez.

Since work began at the mine in January 2018, Fura has sought to improve the existing infrastructure. The company has done test sampling by washing 3,000 metric tons of emerald-bearing rock, retrieving about 6 carats of gem-grade emerald per ton (figure 1). These numbers will likely drop to 2–3 carats/ton once the mine is in production, since much more rock has to be processed. According to recent resource estimations, around 60 million carats are still unrecovered, representing 30 years of mining. If the mines are expanded deeper underground, those numbers could double or even triple, although geologic exploration is still underway via a drilling program to determine the deposit’s depth.

Around 300 people are employed at the site, mainly in bulk sampling; 280 of them are from the local community. They have experience with most aspects of emeralds, including grading and local geology, but they lack knowledge of modern mining techniques and safety measures. Large companies such as Fura are able to instruct their employees on these matters, which they focused on in the months prior to the production stage. Workers also receive formal contracts and monthly wages rather than being given a part of the production as their wages.

Fura also focuses on social responsibility, including gender issues and environmental reclamation. Fura will be opening a women-only washing plant, where emeralds will be handpicked from the processed host rock. They also understand that while mining is an important part of the community, the entire community cannot work in the mine. Fura has looked at alternative employment opportunities, such as a bakery and a sewing workshop to create uniforms and mining gear. While Colombia has strict environmental regulations that must be addressed every time a license is renewed, Sen says that Fura goes beyond what is required, since environmental issues are becoming more important for shareholders. These efforts are part of the larger concept of responsible mining: respect for the environment, safety, employees, and local communities. One example is setting up a football academy as an after-school activity for kids.

Emeralds will be presorted at the mine and taken to company headquarters in Dubai for final sorting and grading before auction. The plan is to bring these rough emeralds to auction in summer 2019 and invite 25–30 companies from Colombia, New York, Hong Kong, and Jaipur. Fura plans to hold two or three auctions per year and will sell only rough. This will provide a regular flow of emerald to the market while allowing for continuous upgrading of the mine and expansion of community programs.

Fura also has interests in Mozambique, where they own the largest ruby mining licenses in terms of area. Demand for rubies is huge and growing, so a consistent ruby supply is highly valued. According to Sen, Myanmar produced about US$1 billion of rough rubies per year at its peak. This has slowed to around US$120 million annually, leaving an enormous demand for other producers to satisfy. 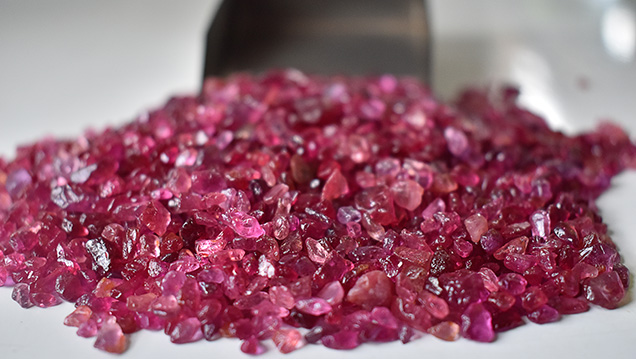 Since rubies were discovered in Montepuez only a decade ago, the deposit is still developing. The rubies are found there in very shallow gravel layers (figure 2); mining is very easy compared to Colombian emerald extraction. Fura has experience with this deposit and the material, as they helped develop the area’s largest ruby mine. They have also acquired Mustang Resources’ ruby licenses and assets and produced there for more than a year. Sen feels that illegal mining is no longer a major problem, which will make it easier to work with the local population.

Fura is exploring the huge license with a drilling campaign to locate the ruby deposits, the extent of which will be determined by more detailed surveys. Once the deposits are identified, bulk sampling will establish the grade. Bulk sampling was scheduled to start in March 2019. They are aiming for a workforce of 400 to 500 by the end of 2019, consisting of 90% local people. Fura is working on social initiatives in Mozambique but did not disclose specifics because the company is still identifying the communities’ needs.

Fura hopes to bring the first rough rubies to auction by the end of 2019, in a system similar to their planned emerald auctions. Using this system, a company can learn the pricing of these highly specialized goods and find out which type of buyer prefers certain material. This will allow for better presentation of goods at later auctions (e.g., creating matching sets of rough in the same lot). They also want to set up a ruby treatment facility in Dubai, where rubies can be enhanced by heating prior to auction for clients who do not have these skills. Most of the buyers are expected to be from Thailand, with others from India, Sri Lanka, and Hong Kong.

Sen sees changes in the jewelry market. The 1990s were heavily focused on gold, with diamonds taking the main focus in the 2000s. He believes we are entering the “decade of color,” and consumers will move toward colored stones. Since retail margins on colored stones are also higher than on diamonds and gold, retailers are motivated to work with them, further increasing demand. Of course, this does not mean that emeralds and rubies will replace diamonds, only that they will complement each other. Fura Gems sees as its biggest competitor other luxury industries such as high-end designer fashion and accessories. Creating and advertising more attractive products in the jewelry range, Sen said, will be critical to keep customers.

Wim Vertriest is supervisor of field gemology at GIA in Bangkok.

A firsthand look at Colombia’s emerald mines and the cutting and trading industry in Bogotá.