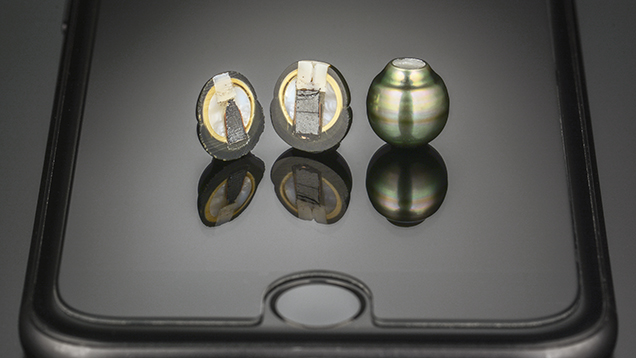 The Carlsbad laboratory received for examination two dark-colored bead cultured pearls embedded with an electronic device (figure 1) from Jeremy Shepherd, CEO of Pearl Paradise. The first sample had been cut in half by Mr. Shepherd in order to investigate the interior components; the smaller half weighed 2.56 ct and measured 10.63 × 9.73 × 3.88 mm (figure 1, left), and the larger half weighed 4.46 ct and measured 10.84 × 10.20 × 5.48 mm (figure 1, center). The second sample (figure 1, right) was intact and weighed 7.83 ct, measuring 10.84 × 10.20 × 5.48 mm. Both samples exhibited the typical external appearance of bead cultured pearls produced by the Pinctada margaritifera mollusk (referred to in the trade as “Tahitian” or “Black South Sea”). UV-Vis spectra of these samples showed the characteristic reflectance features typical of naturally colored pearls originating from this mollusk, with identifying features recorded at 405, 495, and 700 nm.

The cross-section surfaces of the two halves showed a straightforward bead cultured pearl structure. A round translucent white shell bead nucleus was clearly visible in the center. Its freshwater origin was subsequently verified with optical X-ray fluorescence imaging and EDXRF analysis. The alternating cream and brown concentric layers immediately overgrowing the bead were a combination of calcium carbonate and organic-rich materials (i.e., conchiolin) that are sometimes produced during the initial growth stage prior to nacre (aragonite) deposition. The subsequently deposited layers are dark-colored nacre commonly produced by the P. margaritifera mollusk. An electronic device was very obvious within a large partial drill hole that ran through the bead and into the other side of nacre. 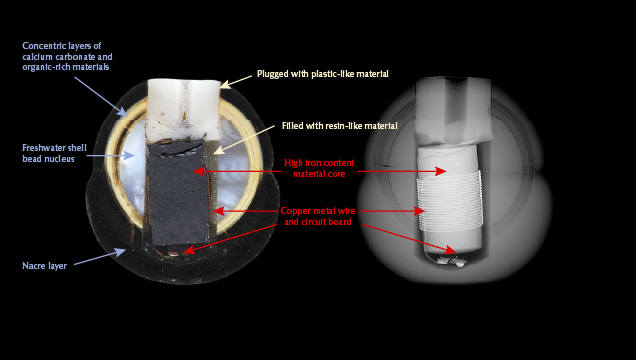 Real-time microradiography (RTX) revealed that the electronic devices embedded in the two halves and in the intact pearl samples were of the same kind. The device was composed of a high-density radio-opaque core (measuring approximately 5.10 × 3.26 mm) that appeared white in the RTX image and as an opaque black filler in the cross sections. An antenna could be seen wrapped around the core, and a circuit board was connected to the end of the antenna (figure 2). Chemical analysis of these components using laser ablation–inductively coupled plasma–mass spectrometry (LA-ICP-MS) revealed that the black core was composed of a high-iron (Fe) material, which was confirmed using a magnet. The bronze-colored antenna and circuit board were identified as copper. The device was held in place in the large drill hole with a transparent near-colorless resin-like material containing numerous gas bubbles. The drill hole areas were worked (cut) to a flattened surface and plugged with a white plastic-like material, which was subsequently re-drilled with a smaller drill hole. Although the large drill hole was placed in the center, it did not affect the origin determination of the pearl. The shell bead nucleus and the device contained within could be observed using RTX, even for the intact sample. The pearl’s shape was certainly impacted by the cut surface, and the classifications for color, overtone, luster, and surface would be based on the remaining nacreous surface.

The electronic device appeared to be a near-field-communication (NFC) chip, which is a short-range wireless connectivity technology based on traditional radio-frequency identification (RFID) (https://nfc-forum.org/what-is-nfc/about-the-technology). NFC technology allows data transfer between two NFC-enabled devices through electromagnetic radio fields within a very short distance, either by physically touching or being within a few centimeters of each other. NFC chips are passive and do not need to have a power source of their own, though the antenna can be coupled with an active device such as a smartphone via an electromagnetic field. The chip is used to store digital information such as images, video, text, and audio, which are accessed through an app due to limited memory. To the best of our knowledge, this technology was first incorporated within pearl jewelry by Galatea: Jewelry by Artist and marketed under the name “Momento” (https://www.momentogem.com). However, the NFC chip embedded in the intact pearl sample in this study was not compatible with the Galatea Momento smartphone application.

So far, GIA has observed three kinds of electronic devices in cultured pearls. The first device encountered was an RFID chip implanted inside a shell nucleus by Fukai Shell Nucleus prior to the culturing process (“ID nuclei add value to pearls,” Hong Kong Jewellery, September 2013, pp. 62–64). The RFID technology is used to track and identify the pearl directly from farm to consumer. The second was a “capsule-like” feature found within an atypical P. margaritifera bead cultured pearl set in a ring that was submitted for identification at GIA Hong Kong, yet the reason for the device remains unknown (Spring 2020 Lab Notes, pp. 134–136). This NFC chip is the third kind and is used for wireless data transmission with an NFC-enabled device such as a mobile phone. The NFC chips were inserted into bead cultured pearls after they had been cultured, unlike the RFID chip. Therefore, the pearl is still classified as a bead cultured pearl on GIA’s pearl identification report. The presence of the device is mentioned in the comments section.

Technology is pervasive in our daily lives and can even influence how pearl jewelry is produced. Since cultured pearls are opaque, the implementation of such micro-technologies within them is a viable option. These innovative wearable technologies retain the external appearance of pearls while performing a specific function.