Pressed Gibbsite and Calcite as a Rhodochrosite Imitation

A new rhodochrosite imitation has appeared in the market, with gemological properties, chemical composition, and structural characteristics that are different from natural rhodochrosite. In this investigation, four samples—two imitations and two rhodochrosites—were examined by standard gemological testing, scanning electron microscopy, energy-dispersive spectroscopy, X-ray diffraction, FTIR, and Raman microspectroscopy. Examination revealed that the imitations are composed of pressed gibbsite and calcite powder with a granular structure, which are easy to identify through standard gemological testing.

Rhodochrosite (MnCO3), the national stone of Argentina, is known as “Inca Rose” for its red and white bands (Xing, 2015). The most significant producer is the Sweet Home mine in the American state of Colorado, which can produce transparent, vivid red single-crystal rhodochrosite (Knox and Lees, 1997). Rhodochrosite for lapidary and mineral specimens is also found in South Africa, Peru, Australia, Romania, Spain, Russia, Mexico, Japan, China, and the American state of Montana (Yu, 2016).

Rhodochrosite has a beautiful pink to deep red bodycolor and usually occurs as a translucent to opaque stone, mostly showing a white banded pattern (Zwaan, 2015). In recent years, it has been processed into center stones for rings and used in pendants, necklaces, and bracelets. Unique and ornamental pieces are also popular with mineral connoisseurs, and thus the value of rhodochrosite has continued to rise (Knox and Lees, 1997).

Imitation rhodochrosite is rare because the complex banded pattern in the natural material is difficult to mimic. Glass imitations have appeared on the market previously, but they could be distinguished from rhodochrosite by gemological properties (such as color, luster, and transparency), structural differences, and internal air bubbles (Zhang, 2006). Meanwhile, pressed materials are commonly used as imitations of turquoise, coral, and chicken-blood stone (Tian et al., 2004; Teng et al., 2008; Zhang et al., 2014), but not as a rhodochrosite imitation. Therefore, we were surprised to find a new rhodochrosite imitation on the market in the form of a pressed material.

We conducted analyses to study the new imitation’s composition and micro-structure characteristics as well as methods for its identification.

The micro-structure of the samples was examined by a scanning electron microscope (SEM, JEOL JSM-7800F) with a working voltage of 15 kV and a working distance of 10 mm.

Infrared spectra were recorded on a Bruker Tensor 27 infrared spectrometer using the specular reflection method and the KBr pressed-pellet technique with 4 cm–1 resolution. The scanning ranges were 2000–400 cm–1 and 4000–400 cm–1, respectively. Powder from the sample (about 0.5 mg) was mixed with potassium bromide (about 150 mg) in an agate pestle and mortar during the FTIR analysis. The powder was ground to a particle size of <2.5 μm.

Raman spectra were recorded on the four samples using a Horiba HR-Evolution Raman microspectrometer with an Ar-ion laser operating at 532 nm excitation between 1800 and 100 cm–1 and accumulating up to three scans.

Visual Appearance and Standard Gemological Properties. The gemological properties of the samples are summarized in table 1. All four had a pink bodycolor with white bands, but the imitation and natural rhodochrosite were different in terms of band shape, luster, and transparency. Compared with the serrated, lace-like bands of rhodochrosite, the bands of the imitation were not as complex or smooth. The imitations also had lower luster and transparency than the natural samples (again, see figure 1).

Figure 2. The natural rhodochrosite was inert under the UV lamp, while the imitation showed strong fluorescence. Photo by Hanyue Xu.

Micro-Structure. The micro-structure was another distinguishing characteristic (figure 3). The natural rhodochrosite had a smooth surface with few pits (figure 3A). Meanwhile, the imitation had a granular texture (figure 3B). The mineral particles of the red part were larger than those in the white parts (figure 3, C and D). Observing the junction of the red and white parts (figure 3B), it can be seen that the two kinds of mineral particles are mutually permeable with each other. Thus we came to the conclusion that the imitation is a pressed stone containing two kinds of material. 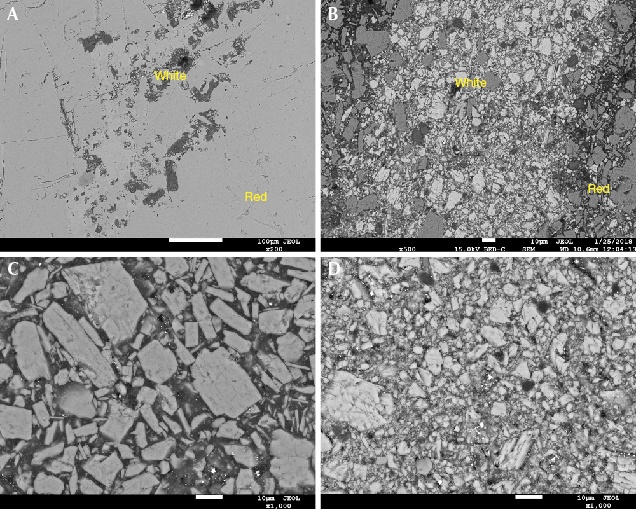 Element Mapping and Chemical Compositions. According to the element mapping, the natural samples mainly contained Mn, C, O, with few impurity elements of Fe and Ca (figure 4A). Rhodochrosite belongs to the carbonate family. Carbonates are a group of minerals with the same structure but slightly different compositions such as siderite (FeCO3), magnesite (MgCO3), and calcite (CaCO3). Thus some Fe, Ca, and Mg can replace Mn as impurity elements in rhodochrosite (Du and Fan, 2010). 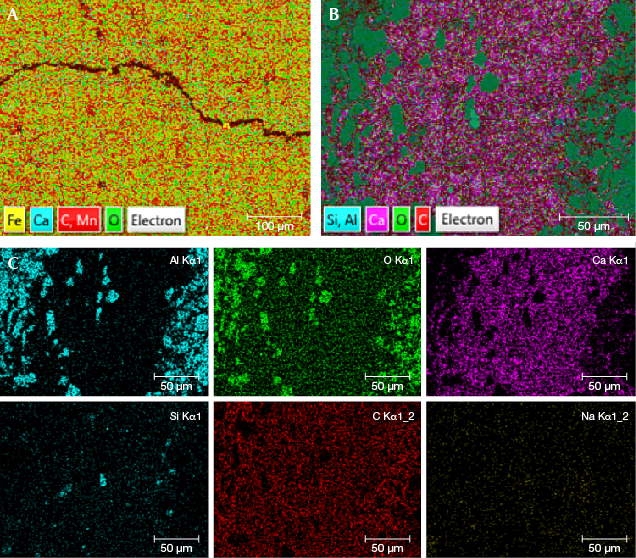 The red and white parts of the imitation had a very different composition from rhodochrosite (figure 4, B and C). The larger mineral particles in the red part mainly contained Al and O, while the smaller particles in the white bands mainly contained Ca, C, and O. The smaller minerals in the white bands also had a small amount of Si and Na as impurity elements. At the same time, we observed that the gap between the particles contained a large amount of C. This indicated that the mineral particles were Al and O compounds in the red part of the imitation, and calcium carbonate in the white part. Moreover, a large amount of C in the gap between the particles revealed that the imitation was perhaps formed by cementing and dyeing with mineral powder and organics.

The EDS data in tables 2 and 3 agree well with the element mapping results. The red part of the imitation samples was mainly composed of Al and O, and contained little Na (F1R and F2R, points 1–3; figure 5); the white part was mainly composed of Ca, C, and O, with a small amount of Si and Na (F1W and F2W, points 1–3; figure 6). The content of C increased sharply (F1R, F2R, F1W, and F2W, points 4–6) when the test points were in the matrix of the imitation. This is probably due to the presence of organics in the mineral particle gap of the imitation.

According to the ICDD powder diffraction file (PDF-2) database and Li et al. (2009), the X-ray diffraction data confirmed the presence of rhodo­chrosite (figure 7, T1 and T2), matching PDF card 99-0089. Furthermore, according to the previously published report of the imitation turquoise (Zhang et al., 2014) and the chemical composition data obtained by EDS (tables 2 and 3), the red part of the imitation is Al(OH)3 (gibbsite), which matches PDF card 33-0018, and the white part is CaCO3 (calcite), matching PDF card 47-1743.

The KBr pressed-pellet technique was used for more accurate and comprehensive determination of the samples’ infrared spectra in the 4000–2000 cm–1 range. It can be seen from figure 9 (T1) that the absorption peaks of the natural rhodochrosite sample in the 1500–400 cm–1 range were the same as those measured by the reflection method (figure 8). The ν(C-O) stretching vibration peak appears around 1800 cm–1 (Li et al., 2009; Yang et al., 2015). The absorption peak at 3446 cm–1 could be caused by the water absorption of KBr.

It can be inferred that the organic material in the matrix of the imitation is a kind of resin used for cementing or dyeing. According to Chen et al. (2006), it could be styrene or a similar compound.

Figure 10. Shown from top to bottom are the Raman spectra of the white and red parts of the rhodochrosite and the imitation rhodochrosite, respectively. Spectra are offset for clarity.

Standard gemological testing was able to distinguish imitations from rhodochrosite by color, structure, band shape, transparency, and UV fluorescence. The imitation samples had brighter color, less-complex banding, lower specific gravity, lower RI, and poor transparency. SEM showed that the imitation had a granular structure, and its red and white parts contained different mineral powder particles. The FTIR, XES, XRD, and Raman spectra showed that the red part of the imitation product consists of granules of gibbsite (Al(OH)3) and the white band part is composed of calcite (CaCO3). Moreover, it is proposed that the matrix contains organic substances, possibly styrene or a similar compound.

Ms. Hanyue Xu is obtaining a master’s degree in gemology, and Dr. Xiaoyan Yu (yuxy@cugb.edu.cn) is director of the gemology teaching and research group and a professor of gemology and mineralogy, at the School of Gemology, China University of Geosciences in Beijing.

The authors would like to thank Mr. Weiren Wang and Mrs. Ning Xu for supplying the samples, along with Mr. Longquan Xu, Mrs. Xu Fei, and Mrs. Ling Yu at the Instrumental Analysis Center, Dalian Polytechnic University, for assistance with the SEM, FTIR, and XRD experiments. Mr. Zhechen Li at the School of Gemology, China University of Geosciences in Beijing, assisted with the Raman spectra experiment; Mrs. Ying Han provided valuable discussions on the experimental data.

Gem Rhodochrosite from the Sweet Home Mine, Colorado

Massive banded rhodochrosite has long been used for carvings and other ornamental objects.