Resin materials marketed as imitation ivory were recently acquired by a GIA gemologist. Material A, marketed under the name “Arvorin Plus,” was purchased from a billiard store. Material B, sold as “Resin-Ivory+S,” was purchased from a guitar store. These are manufactured as rods that can be purchased in a variety of lengths. Both show fine parallel linear striations along their length and a distinct pattern reminiscent of Schreger lines, commonly referred to as an “engine-turned” effect, when viewed across their horizontal plane (figure 1). These are also characteristics seen in genuine elephant and mammoth ivory.

The resin materials were found to have nearly identical gemological properties. Both had a Mohs hardness around 2, indented when pressed firmly with a pointer probe, and melted rapidly when touched with a hot point. They also had a spot refractive index reading of 1.57, a hydrostatic specific gravity of 1.24, and were inert to long-wave and short-wave ultraviolet light. Raman spectroscopy further confirmed their identity as a polymer substance.

Genuine elephant and mammoth ivory typically show a refractive index of 1.540, a specific gravity between 1.70 and 2.00, and weak white to blue fluorescence under both long-wave and short-wave UV. Ivory’s most distinguishing characteristic is a display of Schreger lines (“engine turning”), an inherent growth property that is visible when specimens are cut perpendicular to the length of the tusk. These Schreger lines create unique angles that distinguish between mammoth and elephant species. When concave angles that open to the inner area of the tusk are measured, mammoth ivory will show an average angle of less than 90°, while elephant ivory will show an average angle greater than 90°. Figure 2 shows elephant and mammoth specimens oriented with their concave angles opening to the inner area of the tusk. Their Schreger lines intersect at average angles of 109° and 69°, respectively. These can be compared to materials A and B. While material A did show perpendicular striations along the horizontal plane, the angles were not particularly organized or consistently measurable. However, material B had “engine-turned” striations at an average angle of 90° along this same plane. 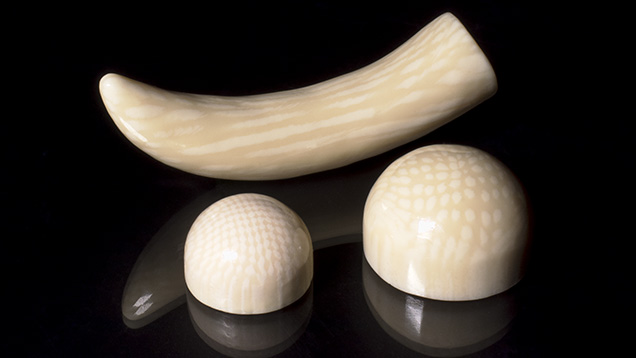 Cabochons were cut from both types of resin, and the form of a small elephant tusk was carved out of material A (figure 3). The resins’ low hardness allowed them to be quickly ground down for shaping, while their high toughness prevented any chipping or fracturing even on small details. The resins each consist of two components with slightly different hardness, which produces the engine-turned pattern. One difficulty is that when attempting to shape a smooth surface, the darker and lighter areas erode at different speeds, creating an uneven texture. This effect is minimized, though, at the prepolishing stage of the carving. The low melting point of the ivory imitations posed an added challenge during the polishing process. When attempting to polish with a compound applied to a felt wheel, the resins can melt and deform relatively quickly.

Elephant ivory was first regulated under the Endangered Species Act in 1976, with more recent laws creating a near-total ban on its import and export. Laws regarding mammoth ivory vary by state. Ivory imitations are now commonly used in their place for furniture and musical instrument inlays, jewelry, and various accessories. Both resins are purportedly composed of spun polyester and are being produced in China.

Britni LeCroy is a staff gemologist, and Dylan Hand is senior analytics technician, at GIA in Carlsbad, California.

Tagua Nut as a Sustainable Botanical Alternative for Ivory