In recent years, Nigeria has gained considerable attention in the gem trade for the discovery of sapphires reportedly from the Mambilla Plateau in Taraba State. In addition to sapphires, spinels have been sporadically mined in Jemaa and recently in Kagoro, both in Kaduna State (figure 1). The spinel group of minerals, with a general chemical formula AB2O4, has a total of 22 different species. Four of these species have Al predominantly occupying the octahedral site: spinel (MgAl2O4), galaxite (MnAl2O4), hercynite (FeAl2O4), and gahnite (ZnAl2O4). The spinels from Kagoro have been identified as gahnite, the zinc end member. Gahnite is one of the rarer members of the spinel group of minerals, typically found at zinc deposits. Most crystals are very small, included, and translucent to opaque. Faceted gems are very collectible due to their rarity and color.

The geology of the Nigerian spinels has been previously studied (R. Jacobson and J.S. Webb, “The pegmatites of central Nigeria,” Geological Survey of Nigeria Bulletin, No. 17, 1946, pp. 1–61), and the deposits can be subdivided into three groups based on their mineralogy: (1) microcline-quartz pegmatites, which commonly occur within the calc-alkaline granitoids and are rarely mineralized; (2) microcline-quartz-mica pegmatites, found within metasedimentary sequences; and (3) quartz-mica veins, which occur in schists and gneisses or marginal to group 2 pegmatites. Gahnite occurs in groups 2 and 3. Knowledge of the composition of zinc-rich spinels is useful in separating a wide variety of source environments. For example, Zn content is high in spinels occurring in rocks that have experienced low-grade metamorphism and high oxygen and sulfur fugacity (fO2 and fS2), whereas Zn content is lowest in high-grade metamorphic rocks (A. Heimann et al., “Zincian spinel associated with metamorphosed Proterozoic base-metal sulfide occurrences, Colorado: A re-evaluation of gahnite composition as a guide in exploration,” Canadian Mineralogist, Vol. 43, No. 2, 2005, pp. 601–622). 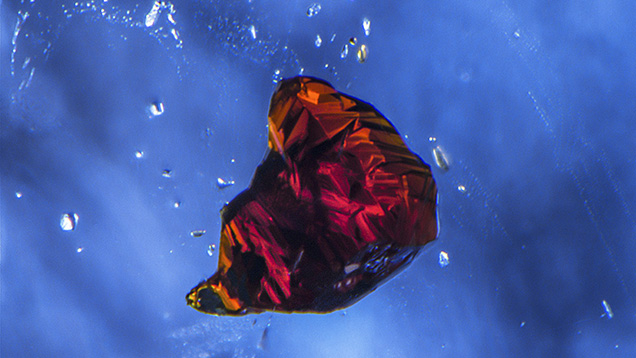 Figure 2. Raman identification of this inclusion was consistent with sphalerite. Photomicrograph by Nathan Renfro; field of view 0.91 mm.

Figure 3. The visible spectrum of the Nigerian gahnite from Kagoro. The absorption bands from ~500 to 650 nm are largely due to Co2+, but with modification from iron absorption bands. Absorption bands around 462 and 470 nm are related to iron chromophores.

Advanced spectroscopic testing was performed on the three samples. The Raman spectra were typical of gahnite, with peaks at 420, 510, and 661 nm. The visible spectrum showed significant cobalt absorption bands (figure 3) between 500 and 620 nm, with additional contribution from iron absorption bands modifying the cobalt absorption spectrum (e.g., A.C. Palke and Z. Sun, “What is cobalt spinel? Unraveling the causes of color in blue spinels,” Fall 2018 G&G, pp. 262–263).

Laser ablation–inductively coupled plasma–mass spectrometry (LA-ICP-MS) analysis was used to obtain the accurate chemistry of the three stones. The chemical composition was acquired by a ThermoFisher iCAP Q ICP-MS coupled with an Elemental Scientific Laser NWR213 laser ablation system. NIST 610 and 612 were used as external standards, and 27Al was used as an internal standard. LA-ICP-MS results (see appendix 1) showed that the three stones were predominantly composed of more than 90 mol.% gahnite (ZnAl2O4), with minor other end members of Al-spinel species. They should thus be classified as gahnites.

Figure 4. A vertical line 1 and a horizontal line 2, containing a total of 44 spots, were selected to apply LA-ICP-MS analyses across the whole section. Mol.% end member vs. position profiles revealed that the stone was predominantly composed of gahnite with minor hercynite, spinel, and galaxite. Detailed information on major element chemistry, site distribution, and species for each spot can be found in appendix 1. Spot spacing is 200 microns.

Figure 5. Trace element vs. position profiles revealed that the outer rims had higher concentrations of V and Co, but lower concentration of Ni than the inner rims and core. Detailed information on trace elements for each spot in lines 1 and 2 can be found in appendix 2.

To better understand the composition of this type of spinel, we prepared a cross-section cut from the middle of one octahedral crystal, sample NBS3 (figure 4). A vertical line of 22 spots (figure 4, line 1) and a horizontal line of 22 spots (figure 4, line 2) were selected to cross the whole section from outer rims to the opposite outer rims for LA-ICP-MS analyses. All the spots showed more than 90 mol.% gahnite with hercynite as the second most abundant species (figure 5). Spots near the outer rims contained more hercynite than spots on the inner rims and core. The mol.% end member distribution was very consistent throughout the whole section. Nine trace elements for each spot in lines 1 and 2 were plotted in figure 5. In general, the outer rims had higher concentrations of V and Co but lower concentration of Ni than the inner rims and core.

Maxwell Hain is a staff gemologist, and Ziyin Sun is a research associate, at GIA in Carlsbad, California.

Gahnospinel is a rare dark greenish blue gemstone that belongs to the spinel group.