In September 2016, while viewing a selection of large Montana sapphires mined by Potentate Mining at their new operation at Rock Creek, one stone stood out. It possessed a beautiful medium blue-green color and a hexagonal crystal form with a blue rim and golden center (figure 1). It weighed 31.98 ct (6.40 g) and appeared to be free of major internal defects. Sapphires this large make up less than 0.25% of Rock Creek’s production, and they are typically fractured or otherwise included.

Most Rock Creek sapphires have frosted or etched surfaces, apparently as a result of partial resorption in the host rock. To assess the quality of this sapphire before cutting, a window was polished, allowing a view of the interior of the crystal; this removed just over one carat, as a surface crack was also ground away. The window revealed that the center gold spot was composed of golden rutile needles that could be cleared by heating. A mostly rehealed parting plane and a few crystal inclusions were also visible. We decided to heat the stone to dissolve the silk, hoping that the parting plane and internal inclusions would not fracture during the process. The heating, performed by Dale Siegford (The Sapphire Gallery, Philipsburg, Montana), dissolved all the silk and changed the rough’s color to a deeper, more uniform blue (figure 2). Most importantly, none of the inclusions spread or formed larger fractures. 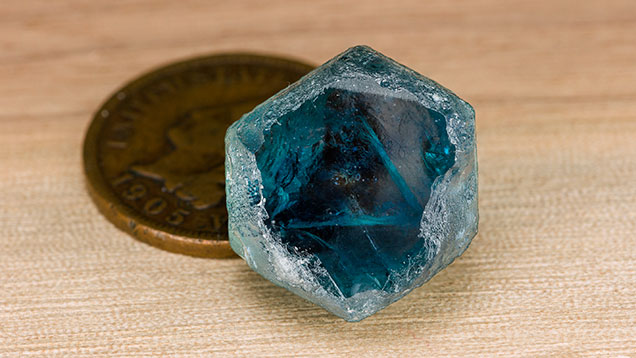 Figure 2. The rough sapphire after heating, with a window polished to view the interior. Photo by Jeffrey R. Hapeman.

While size is always a cutting consideration, color is also a determining factor in the value of the finished gemstone. The pleochroism of sapphire crystals means that orientation is critical for the best presentation of color. This sapphire had a rich blue c-axis just slightly tinted with green, while the a-b axis was a medium shade of green. Fortunately, the crystal was shaped such that the best orientation for both color and size were the same—the table could be positioned directly on the c-axis. Our goal was to feature the stone’s natural hexagonal shape, increasing yield and preserving the crystal’s beauty. GemCad and GemRay were used to work through a series of designs, optimizing them for a combination of light return and scintillation. The intent was to use facets large enough to create broad flashes of color while concealing the minor inclusions. With a gem this rare there is no room for error, so the final design was test-cut on a smaller Rock Creek sapphire to validate the modeling.

Once we were satisfied with the result on the test stone, the cutting of the large gem began on the pavilion. Because the natural shape of the gem matched the final outline, only minor preforming was required; the rough gem weighed 30.84 ct when attached to the dop. There was a crack near one side of the gem, so it was dopped slightly off-center to ensure it would be removed in the cutting process. The gem was faceted in three steps: The facets were cut with a 600-grit sintered lap, followed by a pre-polish with 8,000-mesh diamond and an ultrafine polish using 100,000-mesh polycrystalline synthetic diamond. After completing the pavilion, the gem was transferred to a new dop and the process was repeated to cut the crown (figure 3).

Figure 3. The sapphire during the cutting process. The polished pavilion is shown on the left and the rough-cut crown on the right. Photos by Jeffrey R. Hapeman.

The finished gem weighed 12.62 ct, for a yield of 39.5% from the original rough (figure 4). The authors are aware of only two larger faceted Montana sapphires, one with similar quality. Neither of those stones is blue—one is purple and the other green—making this perhaps the largest faceted blue Montana sapphire, slightly larger than the famed 12.58 ct Big Sky sapphire. Due to its size, rarity, and beauty, this gem was named the “Montana Queen.” 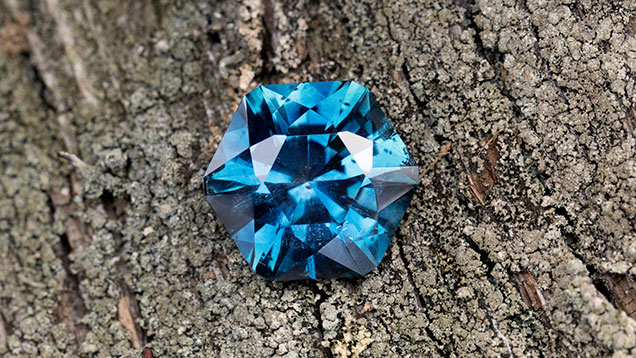 Jeffrey R. Hapeman is the CEO and founder of Earth’s Treasury in Westtown, Pennsylvania. Keith M. Barron is an exploration geologist, and Warren Boyd is geologist and gemologist, with Potentate Mining in Philipsburg, Montana.