The Carlsbad laboratory recently examined three non-nacreous pearls, weighing 7.85 to 9.85 ct and measuring from 10.50 × 10.21 mm to 12.43 × 11.65 × 10.65 mm (figure 1). All three pearls exhibited similar uneven bodycolors and surface characteristics. They displayed purple and white colors with some yellowish brown tints and possessed a porcelaneous surface with mottled to clear fine flames. They were reportedly fished near Ligui, on the eastern coast of the Mexican state of Baja California Sur.

Similar surface structures have been reported in G&G (Fall 2014 Lab Notes, pp. 241–242; Winter 2015 Lab Notes, pp. 436–437; Summer 2016 Micro-World, pp. 202–203). A characteristic reflective blue coloration on the base of the 9.85 ct semi-baroque button (figure 2) was clearly visible when the flame structure was illuminated with a fiber-optic light. Moreover, subsurface to surface-reaching acicular inclusions found in most Spondylus pearls examined previously were also present in these samples. These inclusions, which appear in the form of tubes or needles, are often associated with the flame structure. At first the inclusions were believed to be parasite channels, which are sometimes observed in shells and pearls of various nacreous and non-nacreous mollusks. But after careful inspection they were seen to be part of the structure, radiating from within and reaching the surface in the same direction and with fairly consistent size and shape—whereas the parasite channels are irregularly shaped and in various sizes, running in random directions and usually crossing over each other. 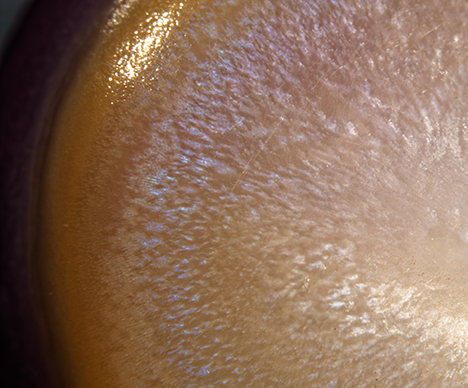 Figure 2. The characteristic reflective blue coloration of Spondylus pearls was visible within the flame structure of the semi-baroque button pearl when illuminated with a fiber-optic light. Photomicrograph by Artitaya Homkrajae; field of view 5.77 mm.

The pearls’ dimpled surface texture appears to be caused by the slightly recessed openings where these inclusions reach the surface. This unique feature is also found on the interior of Spondylus shells in GIA’s Bangkok laboratory collection (figure 3). The resemblance between a pearl’s surface and the interior surface of its host are useful in identifying the mollusk species. Yet many marine gastropods and bivalves produce non-nacreous pearls, and their similar surface structure and color sometimes make mollusk identification challenging. As with the previously reported Spondylus pearls, microradiography of all three pearls revealed tight structures, and no obvious growth arcs were seen.

Figure 3. Subsurface to surface-reaching acicular inclusions were found on the interior of a Spondylus shell (left) from the GIA Bangkok reference collection and associated with the flame structure in a Spondylus pearl (right). Photomicrographs by Artitaya Homkrajae (left, field of view 1.31 mm) and Moqing Lin (right, field of view 2.37 mm).

The Spondylus genus (commonly known as “thorny” or “spiny” oyster) consists of about 76 living species distributed in tropical waters around the world. Spondylus princeps and Spondylus calcifer (also known as Spondylus limbatus) are two of the main species on the western coast of the Americas. S. princeps is found from the gulf side of Baja California down the Pacific coast of Mexico through Panama to northwest Peru. S. calcifer is found in the Sea of Cortez (Mexico) and Ecuador (K. Lamprell, Spiny Oysters: A Revision of the Living Spondylus Species of the World, Jean Lamprell, Brisbane, Australia, 2006). Most Spondylus pearls examined by GIA are reportedly from Spondylus princeps, whose bodycolor is typically white to cream or various saturations of pink, orange, and brown. This is the first time GIA has examined pearls with such a dominant purple hue reported to be from Spondylus calcifer. This species has been recorded as producing pearls in Costa Rica (E. Strack, Pearls, Ruhle-Diebener-Verlag GmbH & Co., Stuttgart, 2006, p. 59).

Artitaya Homkrajae is a staff gemologist at GIA in Carlsbad, California.

Iridescence is seen in a porcelaneous pearl examined at the Carlsbad laboratory.