Petrified woods (figure 1, left) have long been used as a gem and ornamental material due to their beauty, luster, durability, and relative rarity. Certain minerals (mainly quartz, opal, or moganite) crystallize or precipitate in the hollow cavities and cells of the woods in a fossilization process. Fossil trading is government regulated in some countries, and gemologists should know the useful identifying characteristics of petrified woods, which can be misidentified as jasper and agate. With this in mind, the author examined Thai-Myanmar petrified wood samples, fashioned as cabochons (figure 1, right), for gemological characterization.

Thirty-eight samples (all but seven from Thailand) were tested by standard gemological methods, Raman spectroscopy, and X-ray diffraction (XRD). Thirty-seven of these came from dicotyledonous plants, indicated by vascular bundles concentrated in an outer ring of active growth. Periods of slow (winter) and fast (summer) growth create the growth rings in the trunk. One sample came from a palm tree, and had vascular bundles dispersed throughout the trunk. 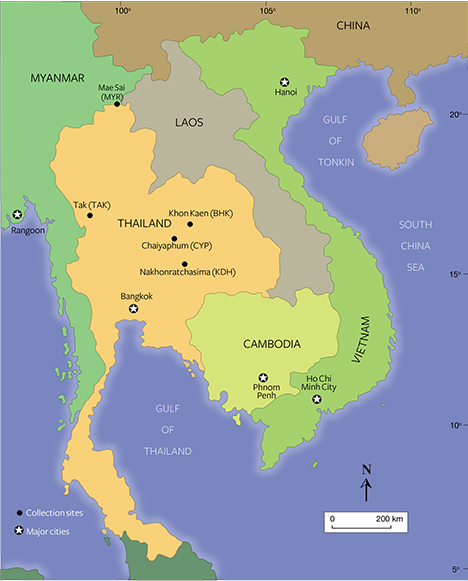 Figure 2. A map showing the localities in Thailand and Myanmar where the petrified wood samples originated. Adapted from Saminpanya and Sutherland, 2013.

The rough surfaces may have been altered and stained by soil or iron oxides, resulting in black, brown, cream, white, and red coloration. Colorless areas and different shades of brown, black, gray, white, cream, yellow, orange, and red appeared below the surface. Some samples exhibited color banding. Most Thai samples were opaque or nearly opaque; those from Myanmar were translucent and lighter in tone. The surfaces showed varying degrees of luster and fracturing. Refractive indices ranged from 1.425 to 1.543 (tested at the flat polished base of the cabochon), and specific gravities ranged from 1.963 to 2.616. Most samples fluoresced weak to moderate chalky white under long-wave UV, but some were inert or showed very weak white fluorescence.

A gemological microscope can often reveal a well-preserved wood grain structure in petrified wood samples. Studies of wood structure generally involve the transverse, tangential, and radial sections of the trunk (R.F. Evert, Esau’s Plant Anatomy: Meristems, Cells, and Tissues of the Plant Body: Their Structure, Function, and Development, 3rd ed., John Wiley & Sons, Hoboken, New Jersey, 2006, pp. 203, 292–296). A transverse section of one of the samples (figure 3) showed several tiny oval-shaped pores filled with quartz or opal (e.g., S. Saminpanya and F.L. Sutherland, “Silica phase-transformations during diagenesis within petrified woods found in fluvial deposits from Thailand-Myanmar,” Sedimentary Geology, Vol. 290, 2013, pp. 15–26). The samples also showed thin parallel rays, groups of cells oriented perpendicular to the trunk’s main axis. In some samples, the parenchyma (the most common plant tissue cells) consisted of pale lines or bands running across the rays. Others showed parenchyma surrounding a pore on the long and parallel wood grains of the tangential section, or dark-colored pores extending the length of the trunk. On the radial section, the pores ran the length of the trunk, with wood grains perpendicular to the pores. 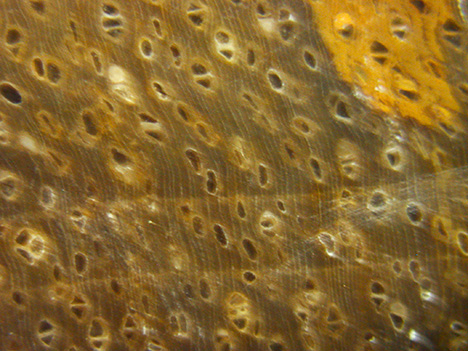 Figure 3. Oval pores and rays (wavy white lines) are seen on a transverse section of this petrified wood sample, and the growth rings are visible as two lines crossing the image. Photomicrograph by Seriwat Saminpanya; field of view 10 mm.

Raman spectra were characteristic of opal (according to the RRUFF database, rruff.info), quartz, and moganite (K.J. Kingma and R.J. Hemley, “Raman spectroscopic study of microcrystalline silica,” American Mineralogist, Vol. 79, 1994, pp. 269–273). Figure 4 shows the peaks for the TAK, BHK, and CYP samples; peaks for KDH (which included opal) and MYR samples were previously presented (Saminpanya and Sutherland, 2013). Most of the quartz material displayed peaks at 354, 395–397, and 464–466 cm–1, with different colors within a sample exhibiting different peak intensities. Some samples showed only major peaks of quartz at 464–466 cm–1. Moganite was mixed with quartz in one sample apiece from CYP, KDH, and MYR, indicated by peaks at 503–506 cm–1, close to the reference peak of 501 cm–1 (Kingma and Hemley, 1994). Two KDH samples showed bands centered at 1587 and 1607 cm–1, characteristic of opal (Saminpanya and Sutherland, 2013), which was probably responsible for the weak to moderate chalky white fluorescence in some of the samples. 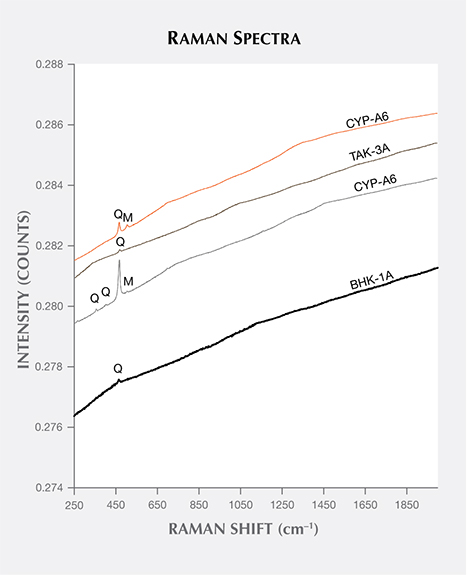 Seriwat Saminpanya is an associate professor of science at Srinakharinwirot University in Bangkok.