France’s Second Empire lasted less than 20 years, from 1851 to 1870, between the Second and Third Republics. Louis Napoléon Bonaparte, the first president of the French Republic, could not seek another mandate. On December 2, 1851, after a military coup, he dismissed the National Assembly, and a year later he named himself Napoleon III, head of France’s Second Empire.  Paris’ Orsay Museum has developed an exhibition, Spectaculaire Second Empire, showing how crucial these years of social disruption and economic euphoria were for France. Often linked to imperial celebrations, this period is typically described as decadent. But it was a time of crisis, when moral and aesthetic habits changed and an old way of life was faced with major technological change, expanded public infrastructure such as railways and inland waterways, and growing industrial activity. The exhibition displays notable relics to reflect the era, including artwork, furniture, and jewelry (figure 1).

During this period many modest craft workshops became factories for luxury goods, including jewelry and objets d’art, as the French imperial family ordered interior design embellishments to enhance homes. Aristide Boucicaut created the first modern department store, Le Bon Marché, in 1852. Sophisticated women changed their dresses and jewels many times a day to avoid wearing the same outfit twice. The dress ball in the northern town of Compiègne became one of the best places to admire the latest creations from jewelers and dress tailors, marking the beginning of high fashion as we know today.

Today only three of the jewelry houses that thrived during the Second Empire continue to produce fine jewelry. Of these three, the museum has chosen to exhibit the work of Mellerio dits Meller, along with pieces by jeweler Alexandre-Gabriel Lemonnier. Napoleon III appointed both Lemmonier and the House of Mellerio crown jewelers; the emperor had become familiar with their talents after they displayed at the Great Exhibition of 1851 in London (also known as the Crystal Palace Exhibition).

Alexandre-Gabriel Lemonnier (1808–1894) was employed by the Bury jewelry shop before opening his own business. Thanks in part to the sponsorship of then-President Bonaparte, Lemonnier opened a more prominent Parisian workshop on Place Vendôme, first at No. 6 and later at No. 25 (a location that is currently occupied by Bulgari) and had clients such as Queen Isabella II of Spain and the Demidoff family of Russia. Among his creations, an impressive diadem with “La Regente” featuring a 337-grain natural pearl now preserved in a private collection. His company closed after the Franco-Prussian War, and he died in 1884. It is exceptional to see pieces he designed on display, particularly the diadem and crown that both belonged to Napoleon III’s wife, Empress Eugénie (figure 2, left and right).

The Italian Mellerio family first arrived in France in 1515; in 1613 Queen Marie de Medici granted the jewelers the right to trade without the customary administrative restrictions. Prior to the French Revolution of 1789, Marie Antoinette and her friends became regular customers. In 1815, Mellerio became the first jewelry store on the Rue de La Paix. During the Second Empire, the House of Mellerio displayed their creations in many “Expositions Universelles,” highlighting technical and artistic innovations such as flexible gold wires used to give stones an oscillating movement (patented in 1854) and colorful enamels.

Nature is one of Mellerio’s favorite inspirational sources: roses, oak leaf, olive leaf, chestnuts. One example is a gold and silver rose brooch set with diamonds that Princess Mathilde ordered in 1864. Perhaps one of the most impressive pieces is the lilac brooch (figure 3) first displayed during the 1862 Exposition Universelle. Handmade with enameled gold and diamonds, its realistic appearance cannot leave anyone indifferent to its artistic brilliance. 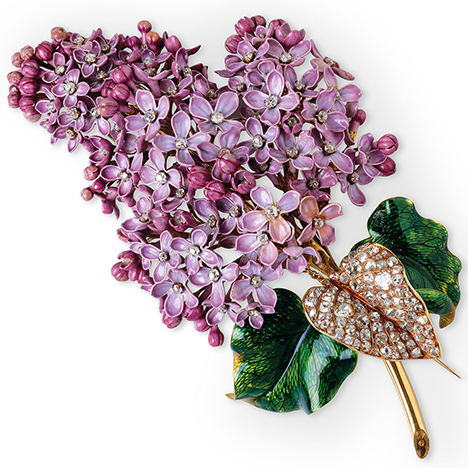 Another innovation was transformable jewelry to be worn for different occasions. Mellerio introduced this technique in 1830, and it has been used by jewelers ever since. Tiaras can be transformed into pendants, bracelets, necklaces, or brooches. The exhibition displays a gold diadem composed of eight brooches set with turquoise and diamonds. Mellerio also created flexible snake bracelets to be worn around the wrist or arm. Princess Mathilde ordered many of these pieces symbolizing life and death, force and purity. The enameled gold bracelets set with diamond, emerald, and ruby (figure 4) also introduce another of Mellerio’s favorite inspirations: archaeological discoveries.

Along with nature- and archaeology-inspired pieces, the house is also familiar with Gothic revival jewelry. Mellerio family members traveled to Rome several times a year in search of the best craftsmen to create cameos or micro-mosaics. Many patterns between 1850 and 1870 were influenced by Egyptian, Greco-Roman, Byzantine, and Paleo-Christian styles. This scarab pendant/brooch shown in figure 5 is set with Burmese rubies from Mogok and natural abalone pearl. The Gothic revival style, seen throughout the 19th century, was especially linked to romanticism, the Middle Ages, and Renaissance rediscovery. A perfect example is the transformable enameled gold bracelet with natural pearls and citrine seen in figure 1. 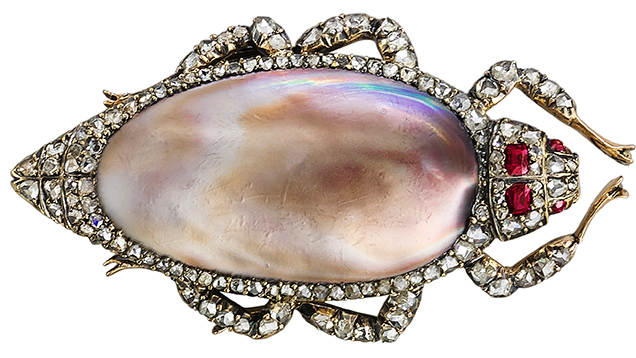 The most amazing piece in the exhibition may be a transformable peacock feather brooch (figure 6) crafted by Mellerio master jeweler Henri Foullé. Empress Eugénie commissioned this piece after the original, shown at the 1867 Exposition Universelle, was bought by Duchess Medina Coeli. The emerald—Eugénie’s favorite gemstone—can be removed to become a pendant, and the brooch itself is said to protect its wearer. 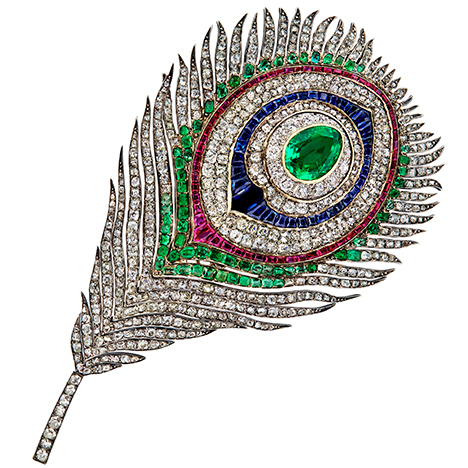 Marie Chabrol is an independent journalist, specializing in the gem and jewelry trade, in Paris.

Exhibition Review: Treasures and Talismans: Rings from the Griffin Collection