In Glitterati: Portraits and Jewelry from Colonial Latin America, the Denver Art Museum (DAM) displays jewelry and portraiture, as well as furniture and other personal objects (figure 1), that reflect personal adornment traditions in all classes and walks of life during the Spanish colonization period in Mexico and South America (1521–1800). Various indigenous tribes have a long tradition of metalworking, and the land is abundant in natural resources. Gold and silver, along with emeralds and diamonds and organic materials such as pearls and coral, are plentiful in the regions covered by the exhibition. The fusion of old and new is a major theme of the exhibition and is expressed through materials, techniques, and design. The talents of the native people and the European jewelers meshed, resulting in glorious creations such as the ones on display.

The exhibit, from the DAM’s Spanish Colonial collection, features a wall of 19th century portraits of Incan rulers from Peru. The rulers use lovely stamped stickpins, called tupu, with flat, round heads to fasten their cloaks; two of these pins are on display nearby. The hammered gold of the pins uses a stamped and chased design to draw out themes of the sun and heavens on these lovely ornaments. A beautiful gold filigree crucifix filial, dating from the 17th century (figure 2), features cabochon emeralds. Close examination reveals tool marks indicating that these gems were recycled from other, older jewelry, perhaps from the pre-Columbian era. The stone’s rough cabochon shaping contrasts with the delicate metalwork. Filigree has roots in both the Spanish and regional cultures, and is used to great effect in this piece. 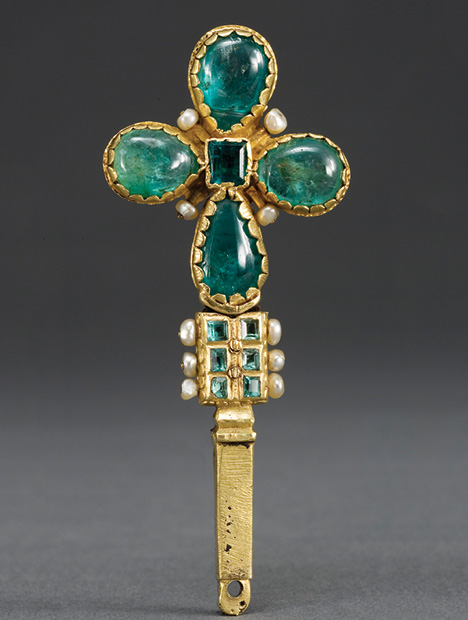 Pearls and coral are present in almost every piece shown. Records from Columbus’ landing in present-day Venezuela in 1498 indicate that the native women were adorned in pearl and coral beads. Nueva Cadiz was settled in part because of the rich pearl beds nearby. Pearls and coral were available to all members of this society. This is demonstrated in Manuel de Arrellano’s portrait “Rendering of a Mulatto,” which depicts a woman of African and Spanish descent draped in pearls (including a six-strand necklace), earrings and coral rings. These materials were still sought by the upper class, and the intricate tiara in figure 1, with its lustrous white pearls and large, angular emeralds in an intricate gilt setting, is testimony to this.  Even the clergy wore status symbols; priests wore rosaries, badges and rings, not to mention the richly chased silver and silver plate used to glorify God during mass. A collection of handpainted nuns’ badges, worn as brooches by women who devoted themselves to Christ, feature saints and the Virgin Mary. Not all pieces were so opulent, and you can also see examples of the blue glass beads that were brought to South America by the Spanish. In fact, the Philippine trade ships that brought new exotic gemstones and ivory also carried paste stones and other materials for the equivalent of modern-day costume jewelry. 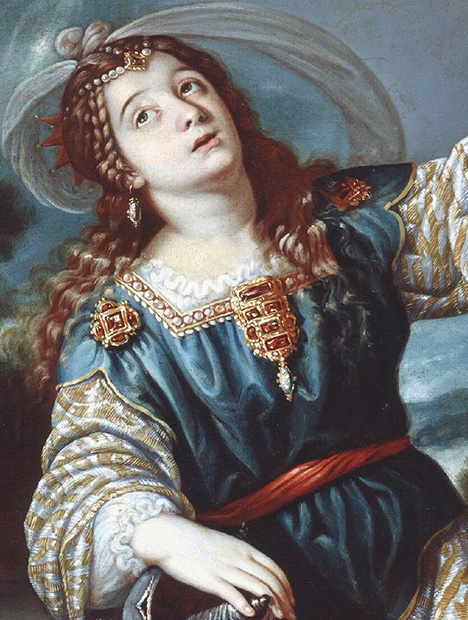 Portraiture featuring members of the upper class makes up a large portion of the exhibit. Intended to display the sitter at the height of their finery, military medals and heraldic symbols decorate the men while the woman drip with diamonds, pearls, and other precious gems set in tiaras, brooches, bracelets, rings, and necklaces.  Even religious figures were not exempt; St. Catherine of Alexandria, seen in figure 3, is shown with a gold and pearl diadem, drop earrings, ruby shoulder clips and a large ruby brooch, as well as the pearls sewn to her neckline. Much of the jewelry follows the European fashions of the time, including trends of the courts. Aside from these surface implications, it is fascinating to see how many of the artists used primary colors and simple dabs of gold, silver, and white highlights capture the sparkle and richness of the stones. While the exhibit could draw more parallels between the art of the native people and the society that developed after colonization, on the whole it is a glimpse into the opulent costuming traditions of the time.

Glitteratti: Portraits and Jewelry from Colonial Latin America will be on display through November 22nd, 2016, on the fifth floor of the Denver Art Museum, in the Spanish Colonial collection. Admission is included in the $10 fee for nonmember Colorado residents ($8 for seniors and college students). The museum is open 10 to 5 Saturday through Thursday, and 10 to 8 on Fridays.

Erin Masich has a BFA with a concentration in metalsmithing and jewelry design from Colorado State University, and has years of experience in the retail industry and in jewelry design.

Exhibition Review: Treasures and Talismans: Rings from the Griffin Collection

Examines a collection of Indian and Indian-inspired jewelry on display at New York's Metropolitan Museum of Art.