Australia’s pearling history reaches back more than 20,000 years, far longer perhaps than many would expect. The exhibition Lustre: Pearling and Australia (figure 1) at the Immigration Museum in Melbourne details how the lustrous shells and pearls have been objects of passion not only as key items in indigenous rituals and mythology, but also as prized objects in the quest for economic wealth since the 1800s. In a well-balanced mix of exhibits, multimedia, and interactive presentations, the exhibition tells the Australian history of pearling, drawing on Aboriginal, Asian, and European stories from its beginnings until today. 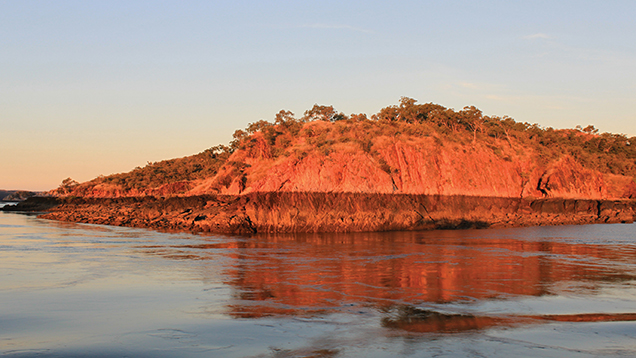 Long before contact with Europeans, Aboriginal people harvested and carved pearl shell and traded it inland from the coast (figure 2). Indigenous coastal people still use pearl shell as a “canvas,” engraving the lustrous shells with designs sometimes highlighted with ochre. Worn exclusively by men, these artworks are thought of as a manifestation of water and life and were traded over vast distances across Australia. A 22,000-year-old piece of shell found in a West Kimberley rock shelter, 200 km from the shoreline, is the oldest known. Contemporary pearl shell carving tells the story of the country, and the works of Kimberley coastal artists can be found in collections around the world (figure 3).

The 1850s saw the birth of the Australian pearling industry in Western Australia, where Pinctada albina mussels were first collected by entrepreneurs at Shark Bay. After Shark Bay was stripped of its mussel populations, the 1861 discovery of the much larger P. maxima shells farther north at Nickol Bay attracted greater numbers of prospective pearlers. By 1870 an industry had been established in the Torres Strait in Australia’s far northeast. Eventually the pearling industry moved to Broome in the West Kimberley, which by 1910 was the largest pearling center in the world (figure 4). Hosting a large fraction of Japanese and Chinese pearlers, it was fueled by a booming international pearl button market.

The breakthrough of culturing round pearls in Japan in 1916, when the first cultured pearls were marketed by Kokichi Mikimoto, resulted in an attempt to establish an Australian cultured pearl farm in 1921. However, lobbying against it by other pearlers resulted in the prohibition of pearl culturing in West Australia. The ban was not lifted until 1949.

Divers were almost exclusively of Asian and Aboriginal descent, and Japanese divers were reputedly the best. The colonial history was harsh and marked by the exploitation and segregation of the laborers. They made up most of the tight-knit crews on “pearling luggers”—ketch-rigged wooden vessels 13 to 19 meters in length—and set out for seabeds as “saltwater cowboys” in search of pearl shells.

Figure 4. The crew of a pearl lugger in Broome, ca. 1900–20. Photo courtesy of the National Archives of Australia.

Pearling ceased in 1941 when local Japanese were interned during World War II. After the war, beginning in 1956, Australian pearl farming was reinvented in the form of cultured South Sea pearl farms, with new technologies, safer practices, and a better understanding of mussel sustainability. The modern manufacture and sale of South Sea pearls has little to do with the saltwater cowboys who stripped the seabeds in historical times. New standards in hygiene and maintenance of mussels have been introduced, as well as new vessels designed as “floating laboratories” that allow operating on the mussels in their natural habitat. A shift from collecting large pearl shells to cultivating pearls using small shells has eased the pressure on populations in the wild.

Along with the history of Australia’s pearling heritage, the exhibition also touches on more generic topics, such as the nature of the material “pearl,” pearling techniques, and the zoology of P. maxima, the pearl mollusk.

For those who cannot visit the exhibition, the museum offers online resources, such as images and text panels from the exhibition, accessible at http://museum.wa.gov.au/explore/lustre-online-text-panels.

Lustre: Pearling and Australia, curated in a partnership between the Western Australian Museum and Nyamba Buru Yawuru, is showing at the Immigration Museum, Melbourne, Australia, until January 15, 2017. Admission is 14 AUD for adults; children are free. The museum is open daily from 10 am to 5 pm (closed Good Friday and Christmas Day).

Dorrit Jacob is professor of biomineralization at Macquarie University in Sydney, Australia. She is a mineralogist and geochemist actively involved in research on nacre and pearls.