Harry Bertoia (1915–1978) was not like most jewelry designers. He did not find inspiration through cherished memories of a mother’s or grandmother’s jewelry. He credited his passion for metalwork to gypsies who came to his hometown of San Lorenzo, Italy to repair and fabricate kitchen equipment. The shining metal and pounding left a “deep and delightful” impression that influenced his work, some of which is currently on display at New York City’s Museum of Arts and Design in Bent, Cast & Forged: The Jewelry of Harry Bertoia (figure 1).

Bertoia’s jewelry is only a small representation of his work. He immigrated to Detroit from Italy in 1930 and attended the Cass Technical School, where he studied art and design and learned how to make jewelry. In 1936 he began his studies at the Art School of the Detroit Society of Arts and Crafts, entering the Cranbrook Academy of Art the following year on a teaching scholarship to study painting and drawing. At the time, the relatively young academy was a melting pot of creativity, attracting many famous artists, designers, and architects such as Walter Gropius, Ray and Charles Eames, and Florence Knoll. After finishing his program, Bertoia was asked to stay on in 1939 to re-open Cranbrook’s metalworking shop. Beginning in 1941, metals were being funneled into manufacturing for WWII, and Bertoia’s work was confined to small ornaments and jewelry. He scavenged scraps from metal shops and scoured flea markets for tableware to find brass and silver. When even these sources became scarce, he taught graphic design. The exhibition includes jewelry pieces from Cranbrook, from both his student days and from his most prolific period in the 1940s.

Starting at Cranbrook, Bertoia also created drawings and monotypes as a way to harness his creative visions, allowing him to investigate structure and line with freedom and spontaneity. Bertoia produced more than 4000 monotypes throughout his career. The media served as a launching point for his exploration into the abstract, helping him to develop relationships between shapes and lines with organic volumetric forms that resulted in expressions of kinetics and latent vitality. Most of the monotypes in the exhibit were created in the same time period as the jewelry.

Bertoia moved to California in 1943 to work for designers (and former classmates) Charles and Ray Eames. Throughout the 1940s, Bertoia continued to make and sell jewelry and monotypes, his style becoming more gestural and biomorphic. His work was in several exhibitions of contemporary jewelry, including one at New York’s Museum of Modern Art in, 1946, and was on the crest of the studio jewelry movement that emphasized design over materials.

The earliest piece in MAD’s exhibition, a pendant from 1935 made from sterling silver and unidentified gemstones, echoes Art Deco geometry and shows skill for handmaking chain and setting gemstones, but it is evident that it is a student piece as it does not yet show the distinct design voice that Bertoia would soon develop. A spherical hatpin is distinctive for its airiness. It is composed of three textured ceramic beads orbiting on silver wire. It was reportedly made as a response to Cranbrook’s visiting Bauhaus architect Walter Gropius’s challenge to design objects in space. There are several monotypes displayed that are very reminiscent of the piece, exhibiting concentric and overlapping orbits.

The 1940s-era fish spine brooch (figure 2, left) was made during the metal shortage; it and retains the sterling silver hallmark that belies its source as recycled silverware. This piece has articulations, which would come to be a trademark of Bertoia’s brooches and necklaces. The brooch is accompanied by a monotype that is evocative of its repeated forms (figure 2, right).

One of the few pieces in gold, a necklace for his wife, exemplifies his fascination with biomorphic shapes and movement in the early 1940s (figure 3). It is comprised of hammered and forged leaf-like components; this articulation through riveted and linked construction also appears in a brass leaf necklace and a 19.5” ornamental centipede.

Figure 3. Bertoia made this forged and fabricated gold necklace for his wife, Brigitta Valentiner. From the collection of Kim and Al Eiber. Photo by Tim Thayer and R. H. Hensleigh.

As the decade progressed, Bertoia’s work became more abstract. It exhibited less literal interpretations of gestural form and movement, typified by a deceptively simple zigzag motif brooch (figure 4). A bracelet from the late 1940s used a more rectilinear design, foreshadowing some of the large-scale brass and copper screens that would grace public and corporate spaces in the future.

Figure 4. This brooch, forged and fabricated in sterling silver (c. 1945), is an example of the abstract jewelry Bertoia produced in the 1940s. From the collection of Kim and Al Eiber, photo courtesy of Wright Auction House.

Bertoia moved to Pennsylvania in 1950 to work with Hans and Florence Knoll. He designed a five piece furniture collection, including the famous “Diamond” chair that is still in production. The income from the successful furniture collection enabled Bertoia to flourish as an independent sculptor in the next decade, with over 50 commissioned pieces that showed an artistic journey in the variety of method and form.  He did not make any jewelry in that decade.

In the 1960s, Bertoia experimented with what he called “tonal” sculptures, made with tall vertical rods on flat bases ranging from a few inches to 20 ft, and large gong sculptures. He renovated an old barn and put in about 100 of his favorite "Sonambient" sculptures. Bertoia returned briefly to jewelry, producing a small collection of pendants and brooches based on his large gong sculptures (figure 5). The jewelry pieces are monumental at 4 to 5 inches across. 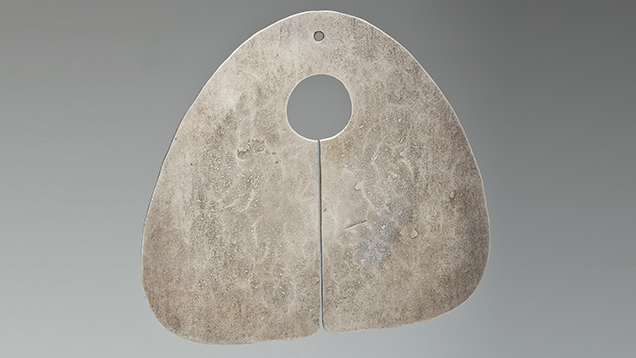 While viewing the jewelry exhibit, one can hear the evocative lingering sounds emanating from the co-exhibition Atmosphere for Enjoyment: Harry Bertoia’s Environment for Sound, featuring recordings made in the barn.  Appreciation of Bertoia’s breadth of work and inspiration is completed as the exhibition ends with examples of his furniture designs and a video featuring Bertoia “playing” his Sonambient sculptures while narrating reflections on his design philosophy.

One cannot walk away from these exhibits without being affected, feeling that one has encountered greatness. Bertoia was an artist who truly experienced and witnessed his surroundings through his senses. He used many mediums to translate life, movement, space, air, and sound, creating atmosphere through objects. The two exhibits will inspire designers, jewelry professionals, art aficionados, and philosophers to find their muses and their voices.

Bent, Cast & Forged: The Jewelry of Harry Bertoia runs until Sunday, September 25, 2016. The recommended admission is $16 for adults, $14 for seniors, and $12 for students. MAD is open Tuesday to Sunday from 10:00 am to 6:00 pm, and Thursdays and Fridays from 10:00 am to 9:00 pm. The museum is closed Mondays and major holidays. Shown in tandem with Atmosphere for Enjoyment: Harry Bertoia’s Environment for Sound.

Exhibition Review: Unique by Design at the Metropolitan Museum of Art

An inside look at the Metropolitan Museum of Art’s Unique by Design exhibition.