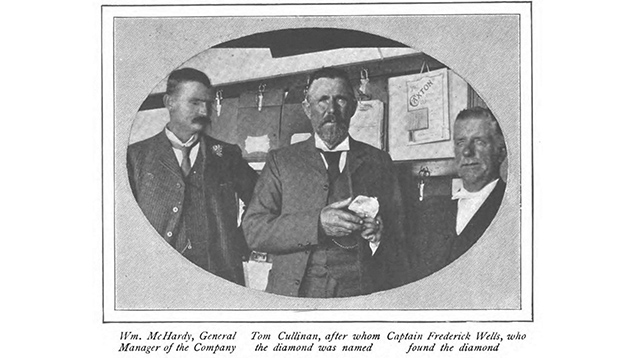 A 3106-ct colorless diamond crystal was found on January 25, 1905, at the Premier Mine (now called the Cullinan Mine) near Pretoria by one of the mine managers, Frederick Wells.  While walking in an upper section of the mine, he noticed the crystal sparkling in the sun along the edge of the open pit at a depth of 18 feet below the land surface.  He removed the crystal from the weathered rock with his knife, and carrying it to his company supervisors at the mine office, he is reported to have said: “My God, look what I have found”.  Announcement of the discovery started an immediate torrent of reports in the public press, with local newspapers beginning to refer to the large crystal as the “Cullinan” diamond in reference to Sir Thomas Cullinan, the individual who discovered the mine and who was the chairman of the Premier Diamond Mining Company that operated it.  The company faced a problem with how to dispose of such a large high-quality diamond — finding a single buyer was unlikely given its high value, and separating it into marketable sizes would have greatly diminished that value.  The diamond was sent to the company offices in London for safekeeping.  Premier Louis Botha suggested the Transvaal government purchase the rough diamond as a gift for King Edward VII who, as a result of the Second Boer War (1899-1902), had extended British rule over what was previously known as the Transvaal Republic.  Discussions on the purchase of the rough diamond continued for two years, and it was finally approved in August 1907.  The king was presented the 3106 carat (621 gram) diamond crystal on November 9, 1907 on occasion of his 66th birthday “as a token of the loyalty and attachment of the people of Transvaal to his throne and person”.  The crystal was then manufactured in Amsterdam into nine major gemstones, the two largest of which were presented to the king on November 21, 1908.  The major gemstones — the Cullinan I (530.2 ct) and Cullinan II (317.4 ct) — were retained for the Crown Jewels, with the larger being set in the Royal Sceptre and the other in the Imperial State Crown.  Photographs were published at the time of both the original rough crystal and the cut gems manufactured from it.

This reading list was compiled to give you an opportunity to learn more about the Cullinan Diamond. The list is not comprehensive, but a compilation of some interesting information that has often been forgotten or overlooked.

Many of the articles exist in the public domain and can be found online at digital libraries such as Hathitrust, Internet Archive, or other digital repositories. More recent publications can often be found in libraries, including the Richard T. Liddicoat Gemological Library. Abstracts of these articles can usually be found on the website of the original journal or magazine, and the article itself is often available for purchase from the publisher.

A Description of the Big Diamond Recently Found in the Premier Mine, Transvaal, F.H. Hatch and G.S. Corstorphine, Geological Magazine, Series 5, Vol. 2, pp. 170-172 with several plates, (1905). The authors provide the first technical description (and photographs) of the Cullinan diamond crystal.  The authors stated that it possessed four crystal faces and four cleavage surfaces, and that it represented only a portion of an even larger crystal given the area of two of the cleavage surfaces.  They described the diamond as being of “remarkable purity for a large stone”, and that its “colour approximates that of a blue-white”.  The dimensions were about 4 x 2.5 x 2 inches.  This same article was reprinted in the Annual Report of the Board of Regents of the Smithsonian Institution, (1906).

The Cullinan Diamond, G.A.F. Molengraaff, Transactions of the Institution of Mining Engineers, Vol. 29, pp. 507-509, (1906).  The author describes the rough crystal fragment, and discussed whether the remaining and possibly larger portions of the original crystal might still be found in the mine.  He noted the presence of several small inclusions and internal cleavage planes, along with the absence of twinning planes.

Louis Asscher, now in New York, Tells How the Cullinan Diamond is being Cut for King Edward, Unknown author, Jewelers' Circular Weekly, Vol. 56, No. 16, p. 57, (1908).  The brother of Joseph Asscher describes the process of manufacturing the Cullinan diamond for which, because of its size, required the creation of special tools to hold it during the polishing process.

The Fate of the Cullinan Gem - The Ordeal that Awaits a Diamond, Author unknown, Pall Mall Magazine, Vol. 41, No. 178, pp. 243-249, (1908).  The author discusses the general steps to fashioning a rough diamond into a polished gemstone.  The manufacture of the Cullinan diamond is mentioned with a question of whether the polishing should take place in London or in the more-experienced cutting center in Amsterdam.  The manufacturing process was estimated to take up to two years to complete.

A Model of the Largest Diamond Known, Author unknown, American Museum Journal, Vol. 8, No. 2, pp. 26-27, (1908).  A report of a natural-size glass model of the Cullinan diamond being placed on public display at the American Museum of Natural History in New York City.

The Cullinan Diamond – The Work of Polishing being Successfully Prosecuted, H.H. Morgan, Daily Consular and Trade Reports, No. 3282 (September 18), pp. 12-13, (1908).  A report by the American Consul in Amsterdam on the progress of cutting the rough Cullinan diamond.  It was necessary to first cleave the rough crystal into three pieces to remove two internal flaws.  Polishing of the individual facets was expected to take more than of year of work.

Finding and Cutting the Great Cullinan Diamond, F.N. Bauskett, Technical World Magazine, Vol. 11, No. 3, pp. 314-318, (1909).  Being the largest and most valuable rough diamond ever found, the Cullinan was turned over to the J. Asscher firm in Amsterdam for polishing because of their history and expertise with this type of work.  The crystal was examined and photographed in all possible orientations, and after a detailed study it was found to contain two important flaws.  The decision was made to cleave the diamond into three pieces along the directions of these two flaws.  Casts were made of the crystal, both in clay and in glass, which were then used for a number of experiments to test how the crystal might cleave.  Narrow slits were cut into the surface with a sawing machine, and by using a special steel knife blade, Joseph Asscher separated the crystal into pieces along planes were the flaws were located.  A secure room was prepared for the special polishing equipment, and under the personal supervision of Henry Koe, who lived and worked in this room for nine months, the pieces were manufactured as cut stones with the placement and polishing of each of the facets.

The Two Largest Diamonds, G.F. Kunz, Century Magazine, Vol. 78, No. 2, pp. 277-288, (1909).  This article, by the famous Tiffany gem expert, describes the discovery in South Africa and the subsequent manufacturing of two large diamond crystals – the Excelsior and the Cullinan.

Diamonds, W. Crookes, (1909).  This book contains a section on the Cullinan Diamond.

Notes on the Weight of the ‘Cullinan’ Diamond, and on the Value of the Carat-weight, L.J. Spencer, Mineralogical Magazine, Vol. 15, No. 71, pp. 318-326, (1910).
The metric carat being equal to 200 milligrams was adopted in 1907 at an international conference, but several years were required before this standard was accepted by various countries (i.e., the United States in 1913, and the United Kingdom in 1914).  Prior to this adoption, different definitions for carat weight for diamonds were being used throughout the world.  When the Cullinan diamond was found in early 1905, it was first weighed at the mine, then at the Johannesburg office of the Premier Diamond Mining Company, and later at the company’s office in London (3032, 3024.75 and 3025.75 carats, respectively), which resulted in different weights for the rough diamond being used in published reports.  In this article, the author reviews the confusing history of the reported weights of the famous diamond, and based on an analysis of the volumes of several glass models, and examination of the weighing equipment used in London, he estimates the original crystal weighed 621.2 grams or 3025.75 English carats.  This article was reprinted in the Chemical News, Vol. 101, No. 2636, pp. 254-257, (1910).

Premier Diamond Mine, near Pretoria, Transvaal, E.M. Weston, Engineering and Mining Journal, Vol. 89, No. 7, pp. 369-372, (1910).  This article gives a description of the Premier mine, which at the time of this publication, had been in operation for about seven years.

The Cullinan Diamond and the Amsterdam Diamond Industry, S.S. Abrahamson, Holland and our Friends the Dutch, pp. 68-76, (1911).  A chapter from a book that describes the cleaving and polishing of the rough diamond which was carried out by the J. Asscher Company of Amsterdam.  At the company factory, a special “strong room” was set up in the basement where the diamond was polished and where it was stored at nighttime.  The diamond was cleaved on February 10, 1908 by Joseph Asscher, after which the pieces were carefully studied to determine how best to manufacture them as gemstones.  Under the personal supervision of the company management, the polishing process was overseen by Henry Koe, one of the most experienced employees of the company – this process began on March 2 and it continued until early November of that year.

Premier Diamond Mine, R. Stokes, Mining Magazine, Vol. 7, No. 5, pp. 366-376, (1912).  This article presents a more detailed description of the diamond mining operations.  More recently in 2003, the mine was renamed the Cullinan Diamond mine.

The Cullinan Diamond Centennial: A History and Gemological Analysis of Cullinans I and II, K. Scarratt and R. Shor, Gems and Gemology, Vol. 42, No. 2, pp. 120-132, (2006).  A recent article that recounts the history of the discovery and manufacturing of the Cullinan diamond crystal, and it contains the first comprehensive report on the gemological properties of the larger gemstones obtained from this celebrated diamond.  When cut, the original rough crystal yielded nine major gemstones, 96 smaller gems, and 9.5 carats of unpolished fragments.

Reconstructing the Cullinan Diamond, W. Wilson, Mineralogical Record, Vol. 45, No. 4, pp. 457-463, (2014).  The author describes a project to reconstruct the original large crystal of which the Cullinan rough diamond is only a portion.  The weight of the original crystal is estimated to have been about 8300 carats.

The Cullinan Diamond and its True Story, B. Gorelick, Jewellery Studies, June, pp. 3-11, (2015).  The author discusses the history of the diamond.

Dr. James Shigley is a distinguished research fellow at the Gemological Institute of America in Carlsbad, California.