Peridot, spinel and sardonyx are the three birthstones for August. The peridot birthstone is known for being formed under extreme conditions, as it can be found in the hardened lava that carried it from deep within Earth’s mantle as well as in meteorites that traveled from outer space. The spinel birthstone was underappreciated until recently, as today’s consumers look for an alternative to ruby, a gem with which red spinel was mistaken for centuries. Sardonyx is the original August birthstone, with a history that dates back more than 4,000 years. Learn more about these three August birthstones and discover the perfect gift for those born in the month of August.

Peridot is the yellowish green to greenish yellow gem variety of the mineral olivine. Throughout history, peridot has often been confused with other gems such as topaz and emerald. The Red Sea island of Topazios, a purported source of the name “topaz,” actually produced peridot. The Shrine of the Three Holy Kings in Germany’s Cologne Cathedral is decorated with 200 carats of gems that were believed to be emeralds but are, in fact, the August birthstone peridot. Some historians even speculate that Cleopatra’s famous emerald collection may have been comprised of peridot.

The word “peridot” comes from the Arabic faridat, meaning gem. This August birthstone was valued in many ancient and medieval cultures. It appeared in priests’ jewelry as early as the second century BCE and later in the chalices and churches of medieval Europe. The peridot birthstone has also been used for centuries as a protective talisman, shielding the owner from evil spirits and “terrors of the night.”

Peridot is the gem given to celebrate a 16th wedding anniversary. 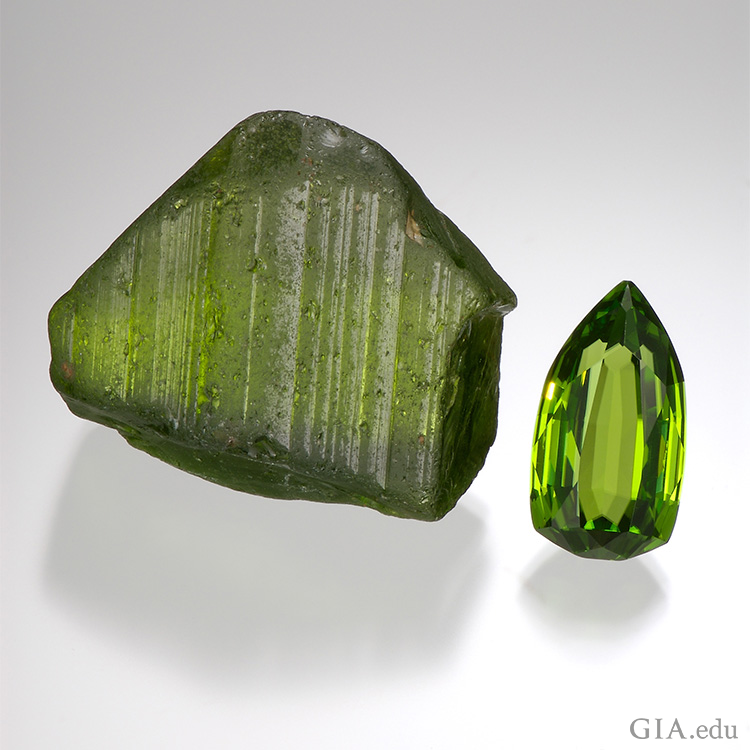 The preferred color for peridot is a pure “grass” green without any hint of yellow or brown. The large (364 ct) crystal is from the historic Red Sea source, Zabargad. Photo: Robert Weldon/GIA

Where is Peridot Found?

Peridot, the August birthstone, has an amazing story. Although most of the peridot seen in jewelry today comes from sources such as China, Myanmar, Pakistan, Tanzania, Vietnam and the United States, some journied to Earth on meteorites while others are found in exotic locales like Peridot Beach, Hawaii, where the sands shimmer a luminous green.

The Egyptian island of Zabargad (the name now given to Topazios) is the oldest recorded source of this August birthstone. Mining may have begun around 340–279 BCE. Although the island produced beautiful peridot, its harsh conditions earned it ominous names like Island of Death and Ophiodes (“snake island”). Peridot from Zabargad has been prized for centuries and is still highly desirable. The finest specimens of this birthstone for August can be found in prestigious museums around the world.

Myanmar (formerly Burma) is another important source of the peridot birthstone. On the northern slope of Kyaukpon, a mountainous region near the gem city of Mogok, loose peridot crystals can sometimes be found in crevices. The finest-quality peridot from this locality has deep color and superb transparency. 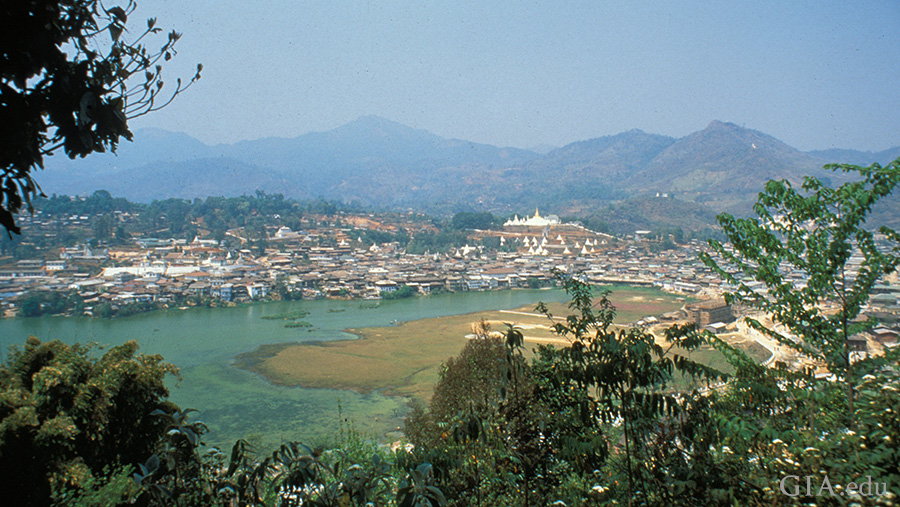 Arizona is the main source of this August birthstone in the United States. Massive volcanic eruptions many thousands of years ago sent rivers of lava spilling across the desert landscape of what is today the San Carlos Apache Indian Reservation, where some Apache families have worked the mines for decades.

This August birthstone has also come to Earth via pallasite (made of nickel-iron and olivine) meteorites. Thousands of meteorites have hit the earth, many of them containing olivine, but only a few have had gem-quality peridot. 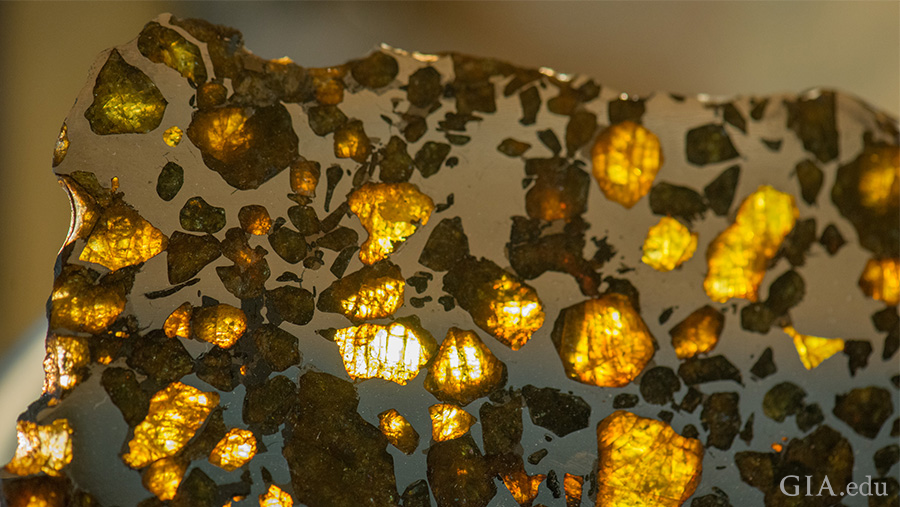 With a hardness of 6.5 to 7 on the Mohs scale of harness, peridot is softer than many gems and cannot take hard wear, so it is not recommended for daily use in a ring. This August birthstone can also be damaged by some acids and even by long-term exposure to acidic perspiration. Cleaning peridot is a delicate process. Never use a steam or ultrasonic cleaner, as your peridot birthstone is vulnerable to thermal shock. It is safest to use a s0ft-bristle brush with a mild dish soap in warm water. Peridot should be stored with care to avoid scratching by gems with greater hardness. 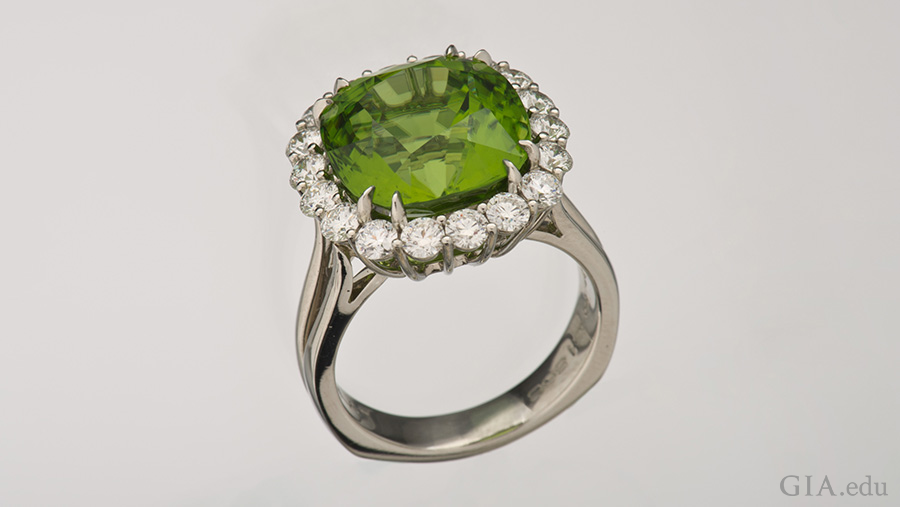 The name “spinel” comes from the Latin word spina, which means thorn, in reference to the shape of spinel crystals. This second August birthstone comes in a wealth of colors: intense red, vibrant pink, orange, purple, violet, blue and bluish green.

For centuries, spinel was mistaken for other gemstones. Some of history’s most famous “rubies” have actually turned out to be this August birthstone. The approximately 170 ct Black Prince’s “ruby,” for example, was owned by a succession of Moorish and Spanish kings before Edward, Prince of Wales (also known as the Black Prince) received the stone in 1367 as payment for winning a battle on behalf of Peter of Castile. Not until the 18th century was spinel clearly separated from ruby on the basis of their chemical differences. Today, this historic red spinel is set in Great Britain’s Imperial State Crown, just above the 317.40 ct Cullinan II diamond.

The 170 ct red spinel in the Imperial State Crown is set with more than 3,000 diamonds, sapphires, emeralds and pearls, including the fabulous Cullinan II diamond. It can now be seen in the Tower of London.

Red spinel, along with other red gems, was thought to be a remedy for all types of blood loss and inflammatory diseases. The red gems were believed to ease anger and promote harmony. This August birthstone is traditionally given as a 22nd wedding anniversary gift.

Where is Spinel Found?

Today, spinel is found in several locations. Major sources include Tajikistan, Myanmar, Sri Lanka, Vietnam, Tanzania and Pakistan. Some sources are known for producing spinel of arresting color, like hot pink and red spinel from Myanmar.

Sri Lanka is a veritable Treasure Island of different gem species and varieties, including sapphire, ruby and garnet. Spinel is mined across the southern half of the country. Colors found there include blue, pink and purple. The lush rolling hills of the Central Highlands and river gravels in the Ratnapura District have been rich sources for centuries.

Myanmar’s Mogok Stone Tract is another prolific source, one where ruby, sapphire and other gem minerals are found along with this and the other August birthstone, peridot. Gems unearthed there are so naturally lustrous that locals call them “spirit polished.” 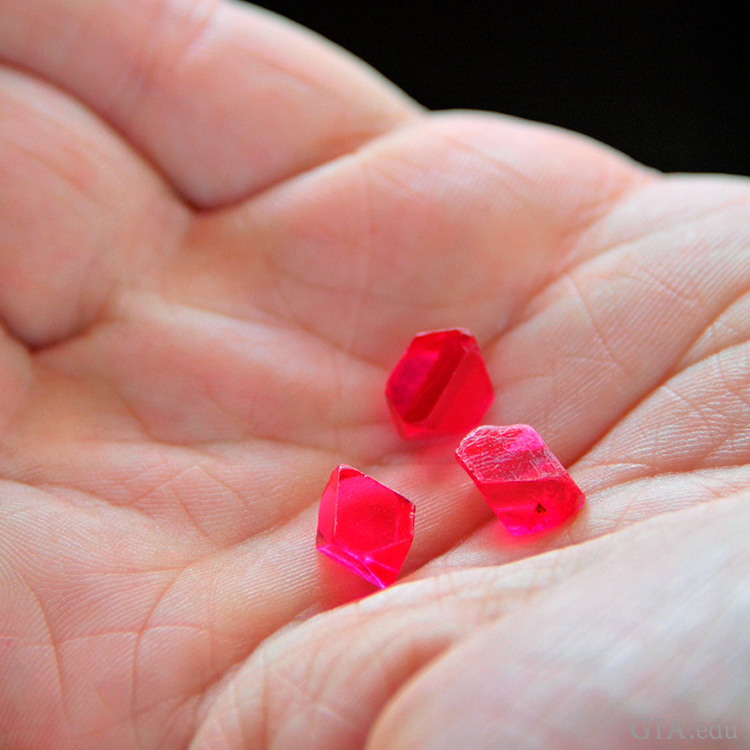 The Luc Yen region in northern Vietnam has produced this August birthstone in deep red, purple, pink, violet and violet-blue since the 1980s, and vivid blue spinels were found there in the 2000s. Getting to the mines is an excursion. It requires a five- to six-hour drive from Hanoi and then hiking or biking for several more hours.

In this scene from Vietnam’s Luc Yen region, a ruby and spinel mining operation can be seen in the foreground, with rice paddies rolling behind it against a background of craggy mountains cloaked in trees. Photo: Vincent Pardieu

A 2007 discovery in Tanzania of pinkish and orangy red spinel captivated gem collectors. Mines there also produce the August birthstone in purple and blue hues.

Spinel is 8 on the Mohs scale of hardness, so it is typically a durable gem for rings and other jewelry. Ultrasonic and steam cleaners can be used; however, the presence of fractures could pose a problem. Warm soapy water is always a safe alternative.

Spinel is stable when exposed to light and chemicals. High heat can cause some colors of this August birthstone to fade. 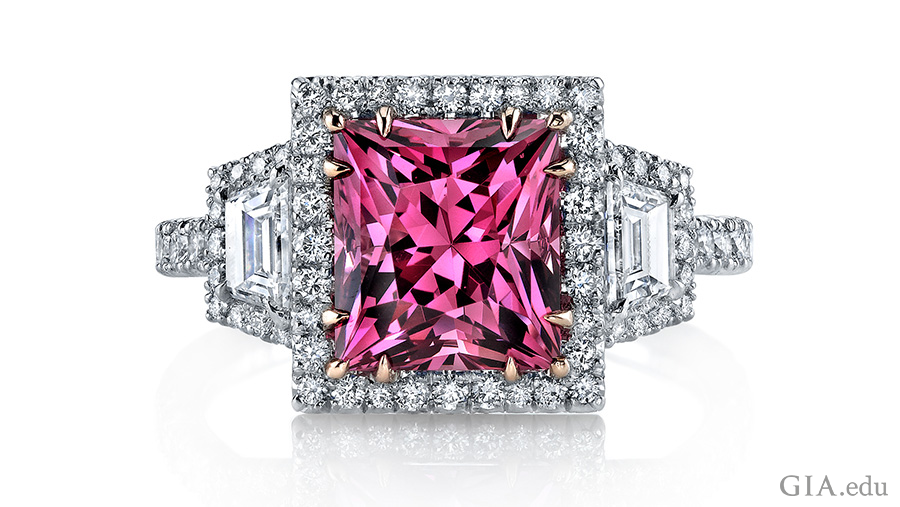 A 3.55 ct princess cut spinel dazzles the eye with its lively color and cut. Two trapezoid diamonds with a total carat weight of 0.50 carats and another 0.76 carats of round brilliant diamonds complete this work of art. Courtesy: Omi Privé
More about Spinel Spinel Buyer's Guide

The most ancient of the August birthstones, sardonyx is a combination of two types of chalcedony (cryptocrystalline quartz): sard and onyx. Bands of brownish red to brown to dark orange sard alternate with typically white or black layers of onyx. In ancient times, sardonyx was a popular stone for Roman seals and signet rings, as hot wax would not stick to it. For millennia, the bands of color in this August birthstone have made it a popular carving material for cameos and intaglios. 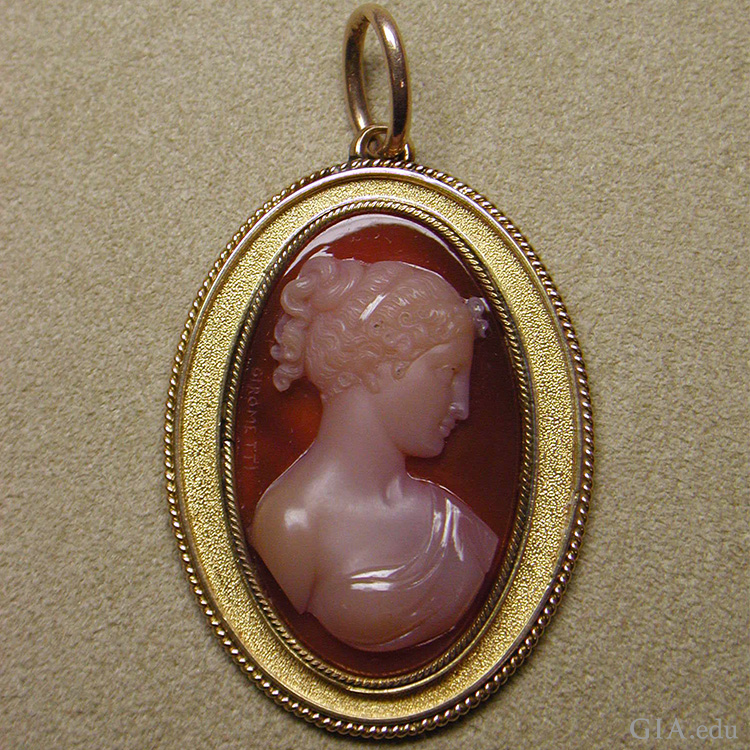 An early 19th century Italian sardonyx cameo mounted in gold as a pendant, by Giuseppe Girometti. Courtesy: The Metropolitan Museum of Art

Sardonyx is believed to be one of the stones in the High Priest’s breastplate, as referred to in the Old Testament, and to represent the strength of spiritual life. Roman soldiers wore sardonyx rings with the image of Mars carved on them for protection in battle. Today, this August birthstone is associated with courage, happiness and clear communication, bringing stability to marriage and partnerships.

Where is Sardonyx Found?

This August birthstone has many sources. India is notable for producing sardonyx with good contrast between the different colored layers. Sardonyx is also found in Brazil, Germany, Czechoslovakia, Madagascar, Uruguay and the United States, among other localities. 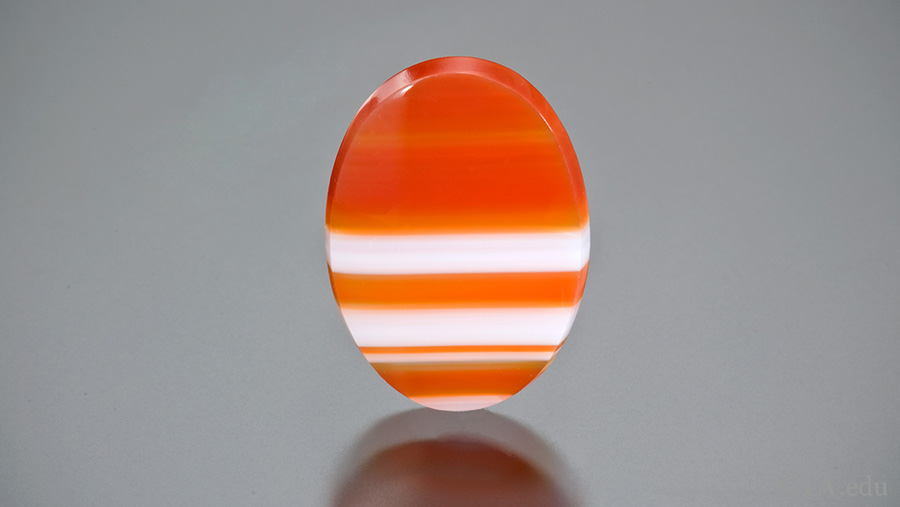 This August birthstone is 6.5 to 7 on the Mohs scale. As with peridot, care should be taken when wearing it, especially as a ring. Note that sardonyx, like other forms of chalcedony, is commonly dyed. High heat, as in jewelry manufacturing or repair techniques, might affect the color of dyed sardonyx. 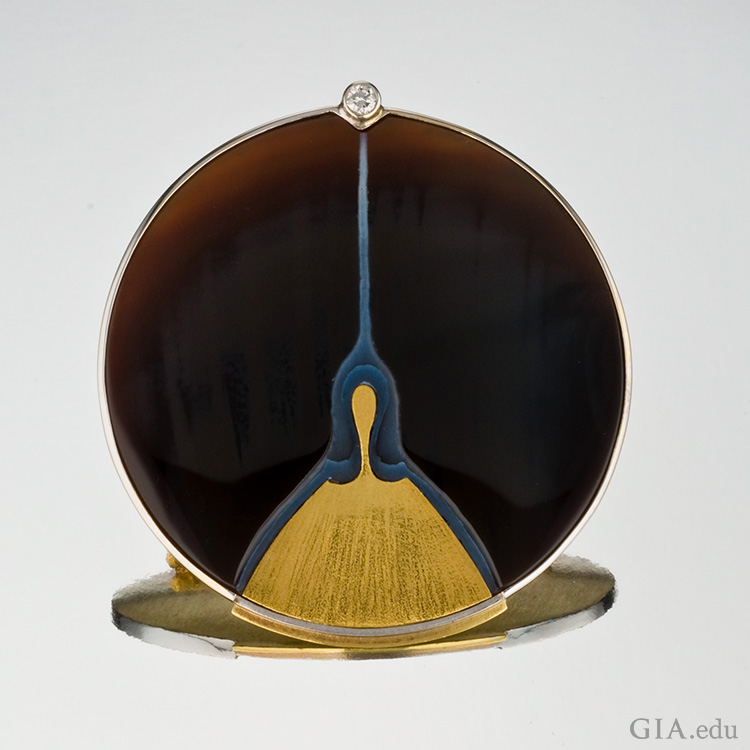 This sardonyx picture brooch with gold and platinum has a single diamond on top. Photo: Robert Weldon/GIA

Ultrasonic and steam cleaners should be used with caution. Again, warm soapy water applied with a soft-bristle brush is the safest option.