Is There a Difference Between Natural and Laboratory-Grown Diamonds?

Two specimens of faceted crystalised carbon - both are crystal clear and give off a kaleidoscope of spectral colours in direct light. They appear to be identical. One, however, is a billion or more years old and the other was recently grown in a laboratory.

Both are diamonds, of course. The first is a natural diamond created by forces deep within the young Earth. The second is from a laboratory and possesses essentially the same chemical, physical and optical properties as its natural counterpart.

Diamond – the material, not the gem – is a mineral consisting of “essentially pure carbon crystalised in the isometric cubic system”, according to the US Federal Trade Commission (FTC), which develops trading guides for the gem and jewellery industry.

Although the FTC says diamonds are essentially pure carbon, the vast majority of natural diamonds contain trace amounts of other substances, particularly nitrogen, which gives them a yellow colour or (rarely) boron, which imparts a blue colour. In addition, they usually contain inclusions, tiny bits of foreign material that were trapped in the still-forming diamond millions of years ago.

Laboratory-grown diamonds (also sometimes referred to as man-made or synthetic diamonds) entered the gem and jewellery market in commercial quantities about five years ago. Although identical in appearance to natural diamonds, they have very subtle differences that can only be detected by trained gemmologists and sophisticated equipment designed for that purpose. 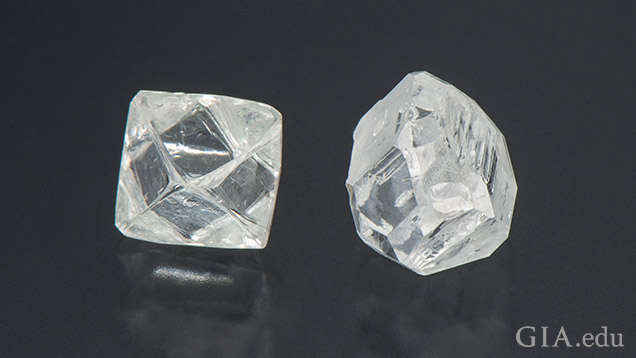 A comparison of rough diamonds shows a 0.83 ct natural diamond crystal on the left and a 1.02 ct HPHT crystal on the right. Both crystals are from the GIA Research Collection. Photo: Orsasa Weldon/GIA

WHERE DO DIAMONDS COME FROM?

Natural diamonds formed deep in the earth under extreme pressure and high temperature as long as three billion years ago. Volcanic activity brought them to the surface where they lay in a type of volcanic rock formation known as kimberlite pipes, waiting to be mined. Only about five per cent of kimberlite pipes contain enough diamond to make them economically feasible to mine. 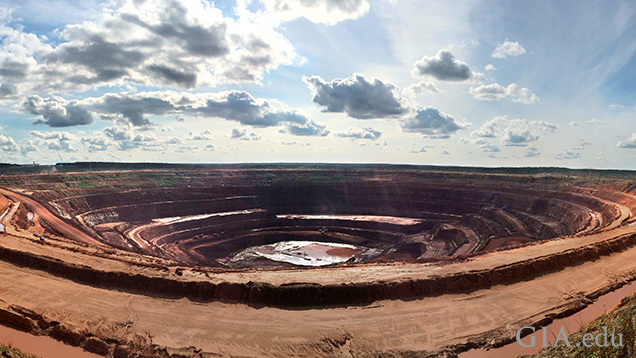 The chemical vapour deposition (CVD) method involves breaking down the molecules of a carbon-rich gas, such as methane, into carbon and hydrogen atoms, which then are deposited on diamond seeds to produce a square-shaped, tabular diamond crystal.

Growing diamonds by either method typically requires less than a month for most sizes. Most CVD-grown diamonds require additional treatments like heat or irradiation to enhance or change their colours after the growth process.

Typically, laboratory-grown diamonds have weighed a carat or less, but as technology and techniques improve, larger stones have appeared in the market. 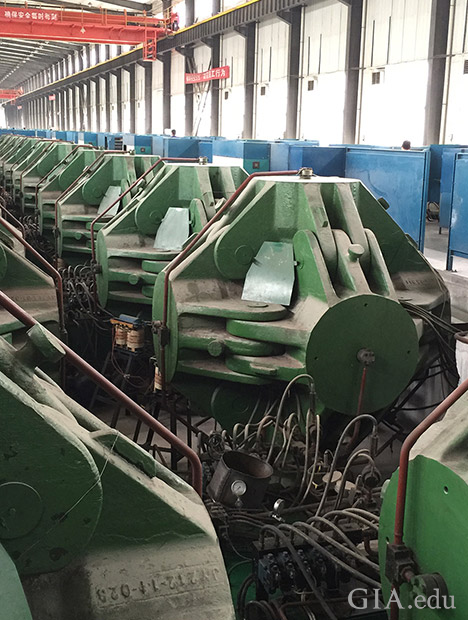 HPHT (high-pressure and high-temperature) presses enclosed in a factory which can produce gem-quality diamonds within a large range of sizes. Photo: Wuyi Wang/GIA

HOW CAN NATURAL AND LABORATORY-GROWN DIAMONDS BE DISTINGUISHED FROM ONE ANOTHER?

It is essential that laboratory-grown diamonds can be identified because consumers need to know what they are buying, and because there are often significant price differences between them and natural gemstones.

As part of its mission to protect and inform the gem-buying public, GIA offers diploma programmes, including the GIA Graduate Gemologist qualification, and seminars that teach diamond grading techniques and the latest methods used to distinguish natural from laboratory-grown diamonds and diamond simulants.

Because laboratory-grown diamonds are essentially chemically and optically the same as their natural counterparts, traditional gemmological observations and old-style “diamond detectors” are not able to tell them apart. Identification at a professional gemmological laboratory or using sophisticated devices developed by GIA and other organisations are the only reliable methods to separate them from natural diamonds.

“Natural diamonds that formed in the Earth over millions of years grow differently from diamonds created in a laboratory in a few weeks. In addition, HPHT- and CVD-created diamonds have a different growth morphology, or how growth conditions influenced the shape of the diamond crystal,” said Dr Shigley.

GIA Senior Research Scientist Dr Sally Eaton-Magaña further explained, “The identification criteria for HPHT and CVD diamonds are quite distinct from each other,” adding that laboratory-grown diamonds have become much more varied over the last 10 to 15 years, requiring GIA researchers to keep pace with new developments.

“We also regularly conduct research on emerging products and GIA has a programme to grow diamonds in the laboratory to stay ahead of any new trends,” Dr Eaton-Magaña said. 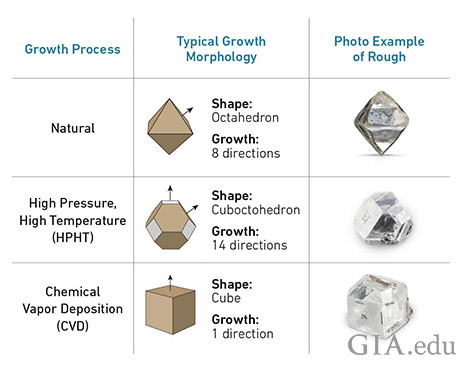 This chart shows the different diamond rough based on how they grew, or their growth morphology. Though this shape is lost after a diamond is cut and polished, identification is still possible by looking for fluorescence patterns that result from its particular growth morphology among other things.

GIA tests every diamond submitted to its gemstone grading and identification laboratory locations around the world to determine whether it is natural or laboratory-grown.

In July, GIA will include the full GIA colour and clarity scales on its laboratory-grown diamond reports.

WHAT ABOUT DIAMONDS THAT ARE NOT SUBMITTED TO GEM LABS FOR GRADING? 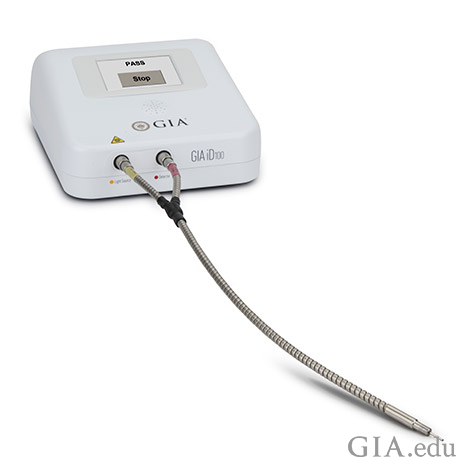 The GIA iD100 allows retailers to rapidly and accurately screen loose and mounted diamonds as small as .005 ct.

GIA also offers the GIA Melee Analysis Service, which quickly and accurately screens parcels of very small diamonds – the most prevalent in the market.

GIA pioneered the grading of diamonds, including the development of the 4Cs of Diamond Quality. Find out which diamond programme would be best for you.
Learn More

What exactly are man-made diamonds? Find out how they compare to natural diamonds and what you should know.
Read More